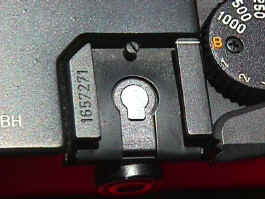 Arguably the second most important M after the M3, the M6 is second in production  the M3 with over 100,000 cameras manufactured.  The original version M6 is the current record holder for M longevity, with production starting in 1984 and ending in 1998 -- being replaced by the M6 TTL.    There are many small M6 variations, most of them undocumented.  Listed here are differences I found between the 21st production M6 and an early 1997 M6, number 2184470.  Doubtless many more variations exist between the two extremes, sometimes only for a short time. 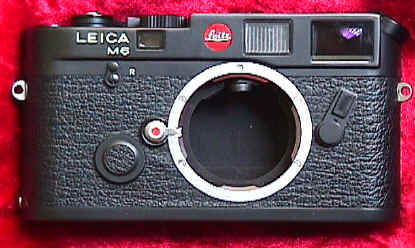 These pictures are of the 21st Production M6! 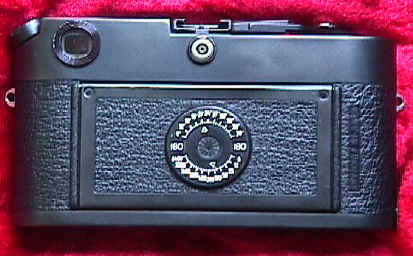 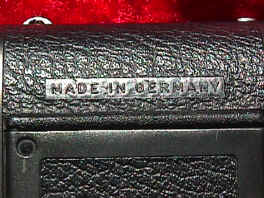 The size, shape and color of the LED's appear identical in both cameras. The Early M6 meter automatically turns off after 9 seconds compared to the Later M6's 11 seconds.

The Early M6 strangely indicates underexposure by NOT lighting its LED's. The Later M6 indicates underexposure by a blinking LED. If the lens cap is on, the Early M6 LED's do not light at all while the Later M6 blinks a LED as a warning. The Later M6 blinks to indicate its light level limits while the Earlier M6 strangely turns off its LEDs under the same circumstances (until it is within 1/2 stop of correct exposure.)

The two M6's function differently to indicate proper exposure. The Early M6 goes from a bright Red on either extreme, to a duller Red with both LED's lit to indicate correct exposure and has a 1/2 stop tolerance to turn a LED off or on. The Later M6 has bright Red at either extreme AND when the correct exposure is set. A  one stop difference will turn a LED on/off.   Personally, I prefer the later system.

M6's made at Wetzlar are so marked on the top plate, and also had "Leitz" on the red front decal.  After the 1988 move to Solms, the cameras were marked Germany only, and "Leitz" was replaced by "Leica."  Some  M6's are marked only "M6" on the front in rather large letters, not "Leica M6."  Many special commemorative M6 were made, some `very worthwhile, and some frankly not.   Chrome was also offered, but black remained the more popular finish.   From 1992 to 1998, the M6 was offered in a special grey Titanium finish.   In 1998 a black .85 version of the M6 was introduced with a higher magnification viewfinder.  It lasted only a short time, until replaced by the M6 TTL .85.    After the introduction of the M6 TTL in 1998, some dealers started referring to the original M6 as the "M6 Classic."  I have yet to see Leica use this reference.

Today the standard M6 and its variations are usually over looked by collectors, despite the M6's  importance in  Leica history.

Revised: April 02, 2005 .  Copyright © 1998-2002  Stephen Gandy. All rights reserved.    This means you may NOT copy and re-use the text or the pictures in ANY other internet or printed publication of ANY kind.  Information in this document is subject to change without notice.  Other products and companies referred to herein are trademarks or registered trademarks of their respective companies or mark holders.