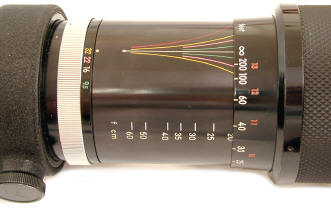 The 200-600 is a single action zoom, with the zoom ring controlling both the zooming and the focusing.  Though a separate lens sleeve, the front element rotates with the zoom ring.  Close focus is a not too close 13 feet, which can be shortened up with the unmarked red ring close up lens, shown fitted in the top photo.   The very heavy duty chrome 101mm lens cap fits OVER the lens shade.  The rainbow depth of field scale was a famous standard for early Nikon zooms.   The lens has no lens coupling, being intended only for stop down metering.   With a variable aperture and a lot of lens elements, stop down metering was apparently the most accurate metering mode for this lens. Front filter size is 82mm.  The lock of the rotating tripod mount is shown to the left.  Notice the focusing scale has TICK marks, but the aperture ring does not. 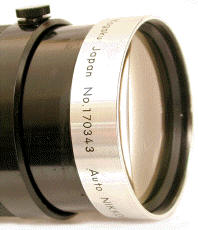 Yep, collectors are funny.   Demand often drives up prices of not so rare items.  Conversely, low demand will drive prices down below their true rarity level.  Get a 200-600 before the prices go up too much.

Revised: November 26, 2003.  Copyright ©  2002  Stephen Gandy. All rights reserved.    This means you may NOT copy and re-use the text or the pictures in ANY other internet or printed publication of ANY kind.  Information in this document is subject to change without notice.  Other products and companies referred to herein are trademarks or registered trademarks of their respective companies or mark holders.