FREE NEXT DAY USA Shipping ON ORDERS OVER $599!

No other lens maker offers FIVE f/0.95 lenses for M43!  These lenses are ideal for the new Blackmagic M43 Pocket Cinema camera and Panasonic M43 cameras! 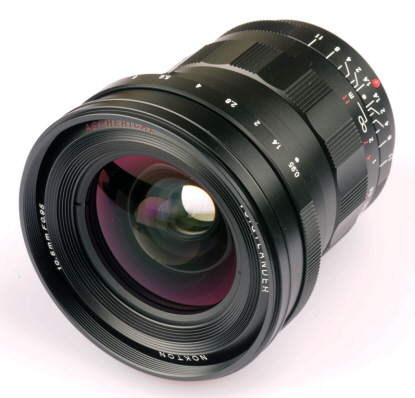 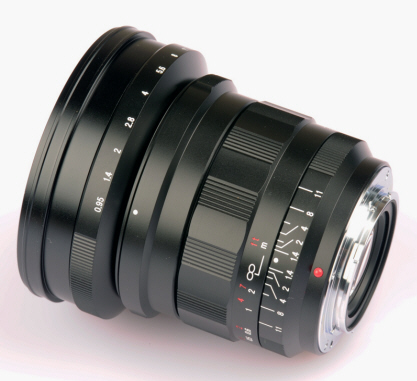 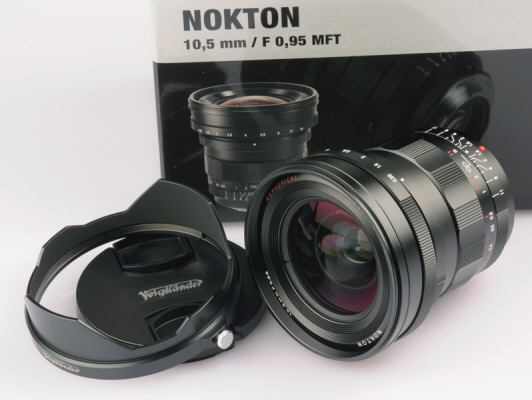 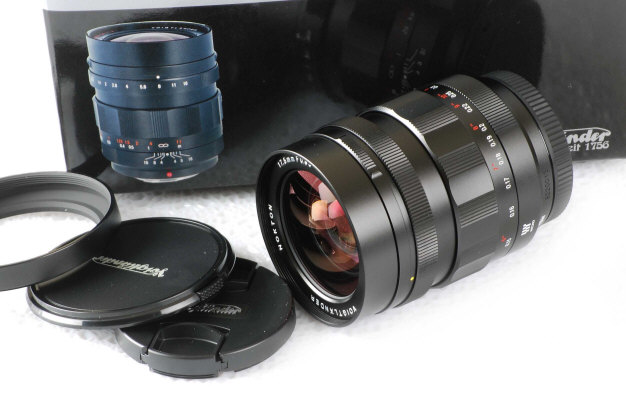 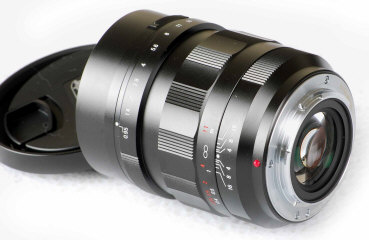 Voigtlander M43 25/.95 V2 Lens with Selective Aperture System giving you a choice of clicked or click less f/stops for Videographers

Lens modified to have NO Click Stops for Videographers 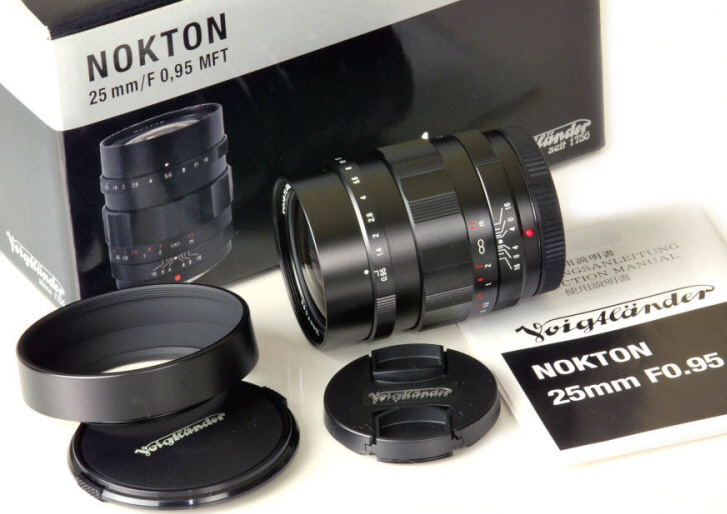 Stephen,
I just wanted to send a quick note of thanks for the Voigtlander 25mm .95 MFT lens.  I use this lens exclusively for video (broadcast commercials & promos) and have received nothing but rave reviews from my clients for the image quality.  The bokeh is so smooth & buttery.  What's surprised me the most is how little it breathes, much less than many of the high-end cine lenses I use on bigger shoots.  This lens on a good camera (I use the AF100) offers a fantastic package for any HD production at any price.  Looking forward to the 17mm .95! 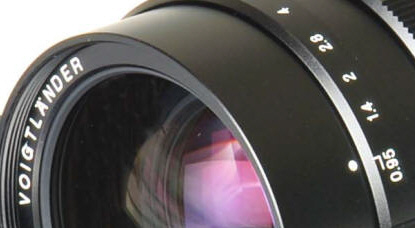 Reviews of the 25/0.95 are outstanding!   Cosina Voigtlander seems to have hit a nerve with customer demand, as orders to the factory far exceeded the first production run.  The factory was not been able to meet demand.   Please Note we do not provide any kind of repair services or parts for grey market (non USA) 25/0.95 Lenses 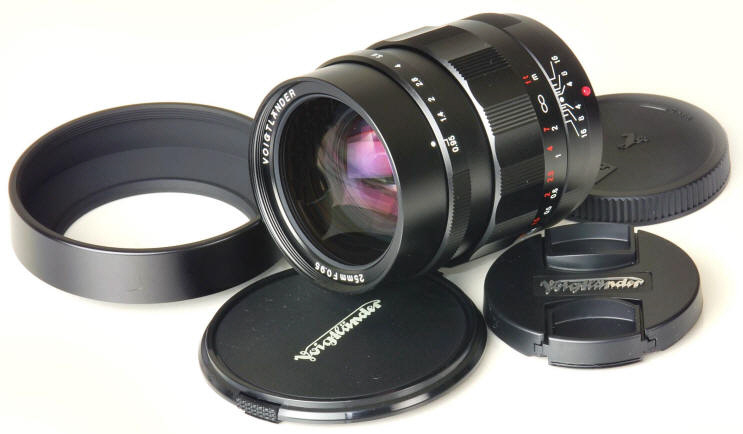 Just as notable as the new .95 lens is the Olympus announcement that Cosina has joined the Micro Four Thirds System Standard Group.   It will be very exciting to see what future Voigtlander M43 products might follow!  This may signal Cosina / Voigtlander's entry into an entirely new product lineup.

My Take on the Voigtländer 25mm f0.95 Nokton

When Cosina declared its membership of the Four Thirds group, it did so with a drum roll and flourish. The first lens off the bench is a startling 25mm f0.95, an insanely fast standard lens (equivalent to 50mm on a Four Thirds sensor). Almost no-one saw it coming and it was taken up faster than a new computer game. If there was a block to queue around, there would have been a queue. The first production run was seriously oversold with dealers around the world getting a fraction of their orders – 10% in one case I know of. Those they did get went out of the door the moment they arrived without disturbing the dust on a store shelf. So what was the fuss about? Speed.

How fast is fast? Well the fastest lenses ever available for 35mm were f0.95 and there have only been two of them. The first was a Canon 50mm made to accompany the Canon 7 and 7s rangefinder in the early 1960’s – the same cameras with a 50mm f1.8 were half the price. It’s a legend of a lens but it’s soft by today’s standards. Still people will pay a good price for one especially if converted to Leica mount – unlike other Canon RF lenses it didn’t have a 39mm screw mount but needed a special bayonet mount to hold it on the camera securely. After all it was ‘over-square’, wider than it was long.

Canon probably made it for bragging rights but at the time they were making a whole series of fast lenses for use on TV and movie cameras and the 50mm was available in a TV mount as well. Many of the Leica adapted examples were actually TV lenses. Film was slow and TV camera sensors were not very sensitive so a lot of light needed to be sucked in. And in moving images the eye is more forgiving of softness than in stills.

More recently both Leica and Canon had 50mm f1.0 lenses in their range but again, the slightly slower f1.4 models were cheaper and sharper with the loss of only one stop. Both are discontinued. Now Leica has re-released the Noctilux in an f0.95 Aspherical version that is a lot sharper – last I saw you could pick one up from B&H NY for a mere $10,500! Your need would have to exceed a very large wallet.

There is an odd Noktor Hyperprime 50mm f0.95 available on the net as well for micro Four Thirds – it appeared quietly in early 2010 with a price tag of $750. Testing showed it to be rather soft with poor contrast, dull colour and so-so bokeh. If you need a 50mm, the Voigtlander 50mm f1.1 with an adapter is a much better option. The Noktor is thought to be a rebranded CCTV lens. And there is a key to the popularity of the new Nokton.

The people who liked the Noktor were mostly movie makers, using the HD movie mode on their Olympus or Panasonic cameras. In fact, the Panasonic GH-1 and now GH-2 which are optimized for movie work drove a whole market in used, superfast, film and TV lenses. 25mm f0.95 Navitars and Schneiders started to sell for $1000 and up, as with a C-mount adapter they would fit mFT just fine. Obviously, Cosina noticed.

I suspect that most of the early buyers of the new Voigtlander were movie makers. The deliciously shallow depth of field possible with these lenses looks wonderful in a low light scene. So what does this new lens mean for the rest of us with an Olympus or Panasonic camera?

Firstly it is not a 50mm. Those lenses have a paper-thin zone of focus but this is a 25mm with a much deeper DOF. It’s still thin wide open but certainly easier to work with. A lot of the complaints about softness with these superfast lenses is to do with inaccurate focussing, I suspect. Then a lot of the fans also talk about the special character and ‘glow’. If you do get the focus correct the critical point is sharp and everything else develops a wonderful softness, a glow. Portraits and nudes in low, available light have a distinctive character.

Secondly it’s a lot sharper wide open than the movie lenses I’ve seen – not in the league of a Leica Noctilux but it’s less than one tenth of the price and it doesn’t need an adapter. The magnification routine on mFT bodies is a bit demanding but means you can get the point of focus exactly where you want.

It’s a heavy lens and not small either with the unique hood fitted (it’s also a 67mm filter adapter and comes with its own cap). In fact it’s heavier than the Olympus EP-1/2, EP-L1 and Panasonic GF-1 compact bodies. It would be most at home on the Panasonic G bodies with their mini-SLR styling for handling and balance.

Build quality is solid – zero plastic. Reflections from the lens element coatings remind me of a late Olympus Zuiko – gold, green and magenta colors. Styling reminds me of an old Konica or Canon FD lens with no rubber grips. Both meter and feet focus distance scales are shown, feet in a muted orange, and all markings are engraved properly. Close focus at 0.17m (6.7”) is delightfully close and translates to a 1:3.9 ratio, not exactly macro but close to it.

In use it is a challenge. Expect a lot of failures because it is hard to focus at first – but often images in low light which are slightly off focus look pretty good, especially in monochrome. It takes a while to get the feel of it. Also remember it’s not just about very low light – in moderate indoor light you can use higher shutter speeds that stop movement. But by the time you’re wide open and using 800 ISO, you’re operating in candlelight.

My first uses in the three days after it arrived were for nudes, and street photography. I experimented with a number of techniques on the Olympus E-P2 as there was no way that I could pre-focus or catch moving targets with such a thin depth of field. One was to use the 7x magnified view to focus on a stationary target and just guess at framing. That worked reasonably well. I got better with practice during the day and it was a filthy day.

Melbourne has deep, dark narrow alleys in the city which are full of workers, shoppers, dark cafes, restaurants, stray school kids and tourists at this time of year. It’s a great place to shoot. Even on a sunny day they are dim but on a rainy day they are gloomy. I moved on to a museum which had a frock show with very dim lighting and finally crashed a model shoot in another dark alley. All good fun but hard work because I chose to keep the lens wide open and the body on 200 iso (best setting for the E-P's) unless I was in a wide, bright street. When I did stop down I found the lens to be really quite sharp though not quite as sharp as my usual Panasonic 20mm f1.7. But that is a very special little lens too.

One thing I did notice was that the process of working in a different way produced quite different shots to what I usually get. The first gallery is here – https://www.pbase.com/afildes/voigtlander_095

All are tweaked in Lightroom for the net, of course. Partly because even on a day like this I shot slightly under to control highlights. Bright areas will blow out totally at these apertures. I would prefer to convert many of these to black and white. I am delighted with tone and feel of the images at this point. 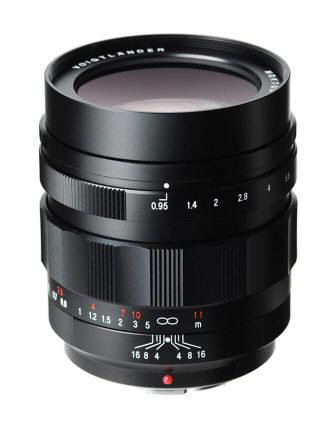 IN STOCK AND SHIPPING 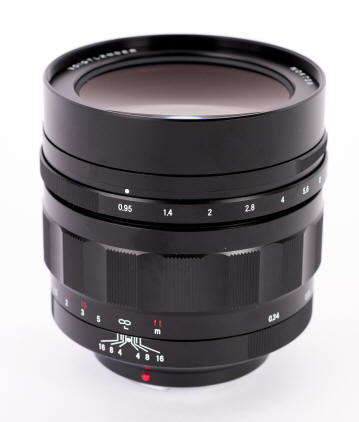 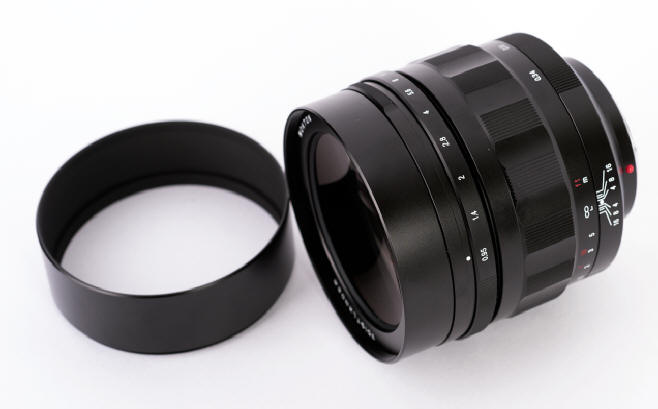 Besides great Bokeh for stills and separation from the background, the  60mm f/0.95 features clickless Selective Aperture operation for videos

If you want a unique M43 portrait lens with a unique look, this is IT !

Almost macro focusing at 1:4 to 34cm that trnslates into 1:2 for full frame equivalent

Revised: November 24, 2021 .  Copyright © 2010-2016  Stephen Gandy. All rights reserved.    This means you may NOT copy and re-use the text or the pictures in ANY other internet or printed publication of ANY kind.  Information in this document is subject to change without notice.  Other products and companies referred to herein are trademarks or registered trademarks of their respective companies or mark holders.