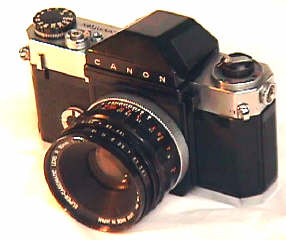 "with Automatic Springback Diaphragm and Mirror" from 1959 Canon Brochure    Springback??

Nice camera, but blown away by the Nikon F

Both introduced in March of 1959, the original Canonflex was discontinued in five months after about 17,000 were made.  The Nikon F continued until 1974 with a production of about 862,000!!

The Canonflex was, and is, a nice camera.  These days more collectors are starting to appreciate this large well made beast.  Yet for its day in June of 1959,  the Canonflex simply could not compete with the soon to be legendary Nikon F in terms of features, system, or sales.  Not to worry though.   Canon eventually got its revenge 30 years later when the EOS Autofocus lineup blew away the best AF Nikon could offer at the time, the Rover 2020, aka the Nikon 2020.

Probably the first impression you will get picking up a  Canonflex is appreciation for its large size and nice finish.  It is a well made camera.  The second thing you will probably notice is its odd bottom lever film advance.  This was a big Canon selling point, claiming that the 130 degree bottom lever advance was faster than the top mounted lever.  Up to 3 frames per second  were claimed possible. 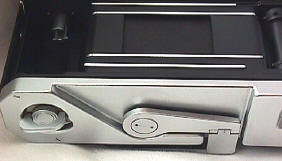 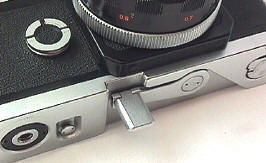 Unfortunately for Canon, most photogs did not find the bottom lever advance convenient on a tripod.  Others like myself merely found it odd.   Though of course, some people loved it.  Rumor is that the Canonflex was very popular with Edsel owners. Rewind button and back opening key are located on the bottom plate.  Double exposures were very easy.  Just take the first shot, push in the rewind button, advance and take the second shot! 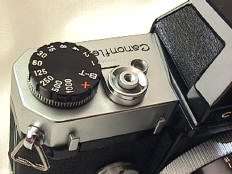 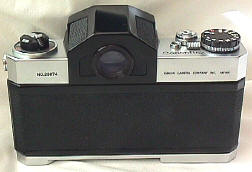 The overall layout of the camera is very clean.   Note the  extremely large,  easy to grasp shutter speed dial.  If there is a larger shutter speed dial on any 35mm camera, I would like to know about it.  Shutter speeds  are a conventional 1 to 1/1000.   A nice touch is the shutter lock located around the shutter release.  Strangely however, the shutter works AFTER the exposure, stopping more shots being taken, rather than BEFORE the exposure.  Try to figure that one out.

That round thing is the self timer.  Look closely at the lens.  Although it had an automatic diaphragm which stopped down and opened up again after the exposure, depth of field was not so easy.  You had to manually stop down the lens with the 2nd f/stop ring, and then manually open it up again.

The Canonflex introduced what was to become the famous Canon breech lock mount.   The selling point is you always have a secure mount,   since any wear is automatically compensated for by tightening the breech.    Real world, this system took noticeably longer to attach or remove lenses.  Worse, the extended pins and levers were unprotected without a rear lens cap.     Despite what eventually was to be almost  30 years of singing its praise,  Canon eventually replaced their breech mount with a conventional bayonet mount on the EOS.

The Canonflex MOUNT is almost the same as the later Canon FL/FD series cameras, but NOT the same.  Lenses have a different set of connections at the back.  In practical terms,  you may damage your camera or lens by interchanging earlier Canonflex bodies and lenses with later FL/FD bodies and lenses.  Some will be OK, some not OK, so be careful.

The removable pentaprism was very nicely done, riding on backward sliding rails like the Miranda Orion.  This mounting system is one of the few areas that Canonflex excelled the Nikon F.   A waist level finder and a 4x magnifier were also available.   Focusing screens were not interchangeable. 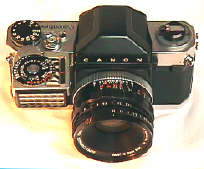 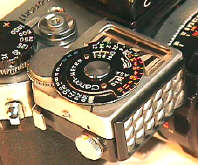 Today the removable exposure meter is rather hard to find.  It clipped on with a spring loaded clip, the button of which is visible near the camera strap lug.    Both high and low ranges were possible, coupling  to the shutter speed dial.    You then read the f/stop reading  and transferred it to the lens. 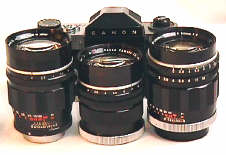 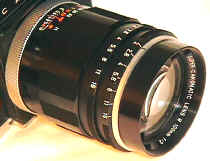 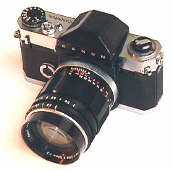 Today most photogs consider the Nikon F a large SLR.  Yet, as you can see, the Canonflex was actually slightly larger.

Paradoxically, the Canonflex was a strange mixture of advanced design and backward design.

Nikon F features the Canonflex did not Equal 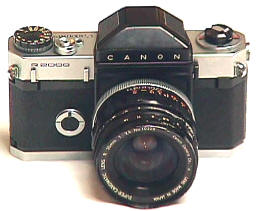 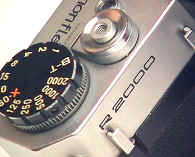 Canonflex RP,  1960, similar to Canonflex but fixed pentaprism, production about 31,000

Canonflex RM, 1962, Similar to RP but built  in selenium meter.  The most common Canonflex with about 72,000 production.

Canonflex lens cases were very well done in brown leather.   They are all prominently embossed on top -- such as "Canon R 35/2.5."   Cases will turn up without  lenses, but you need to know what to look for.

Original Canonflex rear lens caps are black plastic.  The edges are plain.  The back of the cap has a 4mm wide plain lip on it, inside of which is a light textured plastic which reminds me of crinkled paint.  They are labeled "Canon" below the center of the cap, below which is "Japan" in smaller letters.    The capital "C" is rather large, 5mm high.

I my experience at least,  I have found Canonflex bodies to be relatively dependable and sturdy.   I can not say the same of Canonflex lenses, which seem to have more than their share of mechanical problems.   Of course the number one problem (like so many other early SLR's) is a sticking diaphragm.   The other problems are various mechanical problems such as aperture linkage and  bent connecting levers at the back of the lens.    So, when you are buying one, be sure to inspect the lenses carefully.