-- the most advanced  RF of its time 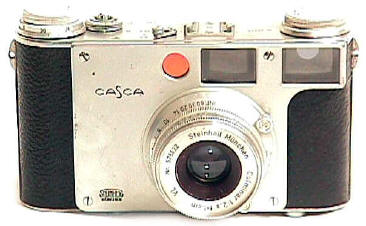 If you are like most photogs, you have probably never even heard of this gem, much less seen it. Yet, the incredible German made Steinheil Casca II of 1948 was easily, far and away, the most advanced rangefinder camera of its time. This means it outshone some tough competition, considering Leica, Nikon, Canon, and Minolta had all started  post war production by that time.

Apparently Leica was impressed and took the Casca  seriously.    Supposedly Leica threatened to sue over claimed patent infringements, successfully stopping Casca II production after only several hundred had been sold.    What was so special about the Casca II?  Almost everything.  A more advanced camera would not see the light of a sales brochure until the Leica M3 of 1954. 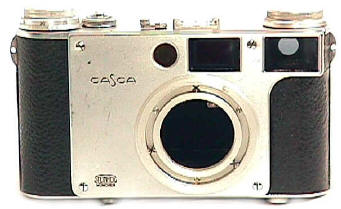 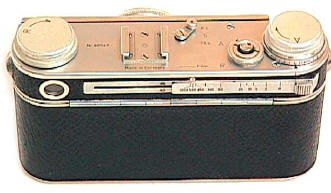 The Casca II's unique design is easy to spot.  I spied this one half way across a large camera show hall. There simply isn't another camera that looks similar, except the rangefinderless Casca I.  The Casca is very well finished, though it does no compare to the Leicas of the same period.  Instead of chrome, the Casca uses mostly aluminum, even on the strap lugs (which are worn through on this camera). 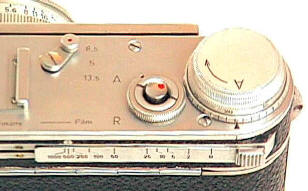 Alas, the Casca was advanced, but not so advanced as to have lever advance and wind.  The film advance is smooth and the shutter quiet, not all that unlike a Leica IIIc.  The body covering is well done, similar to the IIIc's vulcanite.   Film rewinding is accomplished by the rotating collar around the shutter release and the large rewind knob.

The sliding catch from A to Z opened the back.  The flash sync was  manually set, and fully adjustable to most popular bulb choices, including electronic flash.   Some sort of   two prong flash cord connection fitted to the bottom plate was required. 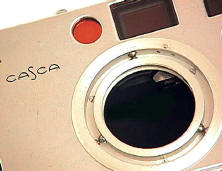 The three opposing sets of ball bearings are spring loaded on each side, so they can spread apart for the lens bayonet.  The middle pic shows both the inner and outer curled "C" springs which hold the ball bearings in place.   The last pic shows the Casca II with the lens mount removed. 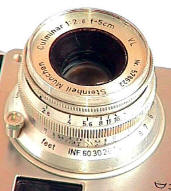 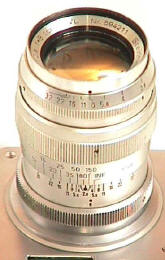 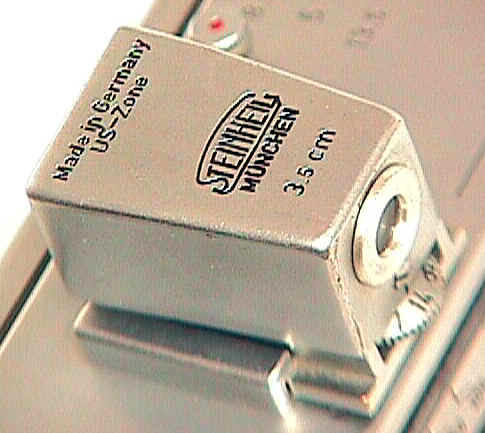 The "Made in Germany US-Zone" 35mm Steinheil finder was apparently marketed separately, since I have seen about six of them without an accompanying Casca. 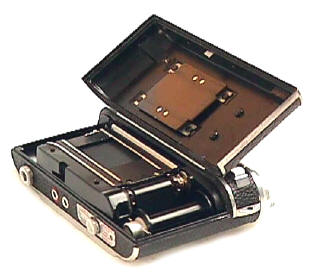 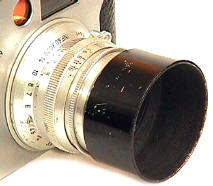 Not content with Leica or Contax style loading, Casca had its own very easy and unusual back flip film loading design.   The film spool is removable.  The film The back flips UP and out of the way to show the Leica like cloth shutter.   The 50mm lens shade also does the job for the 90 and 135.

Only "Casca" filters would be good enough for Steinheil's post war wonder.  All Casca lenses used the same 40.5 mm  filter size.  Included in the Casca kit were Yellow, Orange, Green, and UV filters.    The unmarked Casca rear lens caps are rather strange things.  I wonder how many have been thrown out because they were not recognized. 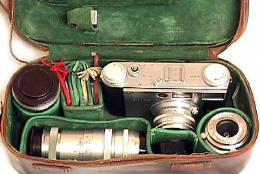 Michael has probably overhauled as many Cascas as any other repairman in the US this year, that is to say, one.  He writes:

" It does need to be recognized that so many things in Europe of 1948 were scarce, rationed, or simply unobtainable.  This may have had a hand in the camera's early demise.     My guess is that this    camera proved to be too expensive to produce, particularly at a time when German industry was just struggling to restart after the war.

The machining is of Leica level and most of the materials are excellent.     The method of lens mounting and interchange is utterly unique in my experience.  Three sets of opposing spring loaded ball bearings part as the lens is inserted,  dropping into detents machined into the lens flange throat -- thereby locking the lens securely.     Lens removal or mounting requires only that the lens barrel be turned about 10 degrees!      Many of the service adjustments are well and uniquely hidden.

One of the few shortcoming to an excellent design are the strap lugs, cast  into the light alloy body.   The lugs are thin and weak to begin with --  they can easily wear through.  No design allowance for wear or repair is provided. " 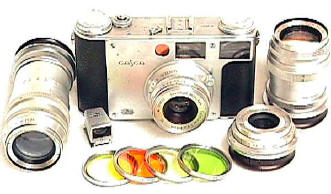 The Steinheil Casca II was far ahead of its time with features that eclipsed the competition, even if its finish did not.   It deserved to be a best seller.    Instead the Casca II sank into oblivion with very limited sales.   Perhaps the rumor that Leica forced Steinheil to stop production due to patent infringement is true.

It would not be until the Leica M3 until we would see a large finder like this one again.

Revised: October 12, 2012 .  Copyright © 1998-2012  Stephen Gandy. All rights reserved.    This means you may NOT copy and re-use the text or the pictures in ANY other internet or printed publication of ANY kind.  Information in this document is subject to change without notice.  Other products and companies referred to herein are trademarks or registered trademarks of their respective companies or mark holders.