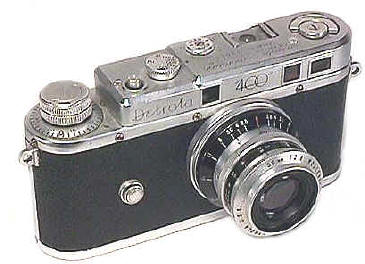 Today this obviously Leica inspired 35 is a very rare camera.   It was made in the good 'ol USA,  1940 Detroit Michigan to be exact.    The manufacturer was the Detrola Corporation, maker of inexpensive 127 cameras and auto accessories.

The Detrola 400 had the looks of a great camera, even if it wasn't.   The Detrola Corporation  didn't seem to understand cameras very well, but the Detrola 400 certainly benefited  from an excellent but anonymous stylist.  Designed to be marketed for $69.50 with the 50/3.5 lens, the 400 was too expensive to battle the Argus A in the marketplace, and far too simple and limited to go against the luxury 35's:    Leica and Zeiss Contax. 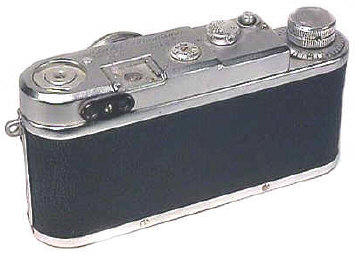 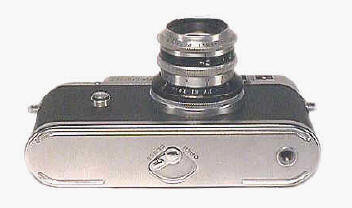 According to Lahue's & Bailey's "The American 35," Detrola 400 chief deficiencies included consistent film frame   spacing and a shutter which gave uneven exposures as it tended to slow towards the end of its travel.   They say the shutter problem was so bad the slow speeds were dispensed with in production cameras.   This camera (serial number 12013)   does have slow speeds, though 400's without slow speeds are reported.  Lahue and Bailey also cite the astounding figure of 250,000 manufactured (more than Leica's best selling  M3), even though the camera is extremely difficult to find even in America.    Personally I find such production figures  impossible to believe, especially since the Detrola 400 died a quick death.   The 400 was announced in 1940 with W.W.II on the not too distant American horizon.  Perhaps not   coincidentally,  Detrola Corporation went into bankruptcy and had its assets   sold off by the summer of 1941.   Photos courtesy and copyright of Roger Reinke.

The Detrola 400 is remembered today as an interesting American   design that even  most experienced American camera collectors have never seen.