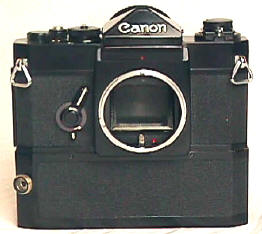 Canon's 1972 High Speed F-1  for the 1972 Olympics was available only by special order to credentialed press photographers.   It was the fastest SLR motor drive made to that time.  Its fixed pellicle mirror  allowed continuous viewing (without the typical SLR blackout when the mirror goes up),   and higher motor speeds  up to 9 frames per second.     The  20/1000mm thick pellicle mirror  directed  part of the light to the finder and the rest to the film.     The High Speed F1 was Canon's answer to the Nikon F High Speed cameras.    This was the first time Canon clearly beat Nikon for bragging rights.   Nikon's F High Speed, also introduced for the 1972 Olympics, was slower at 7 fps but had to have the mirror locked up for top speed -- not the best situation for a SLR.   Nikon remedied the situation with its 9 fps F High Speed for the Montreal Olympics, with pellicle mirror. 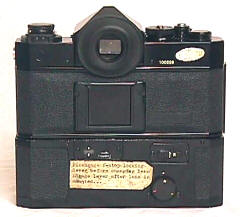 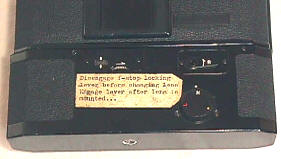 Note the  very deep permanently  attached   motordrive.    Strangely, the motor settings of  9, 7, and 4  were not labeled. 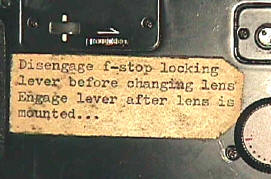 The High Speed's  fast operation requires stop down mode lens operation, i.e. at the lens' shooting aperture.    9 fps was beyond the limits of the FD lens mount's automatic diaphragm operation.

The High Speed  would not operate unless the lens was stopped down using the front mounted stop down lever.   That same  lever had to be disengaged before you could change the lens! 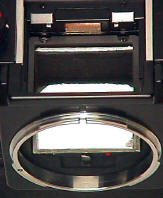 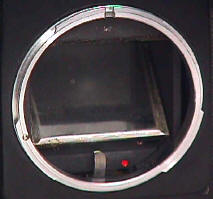 The High Speed's reason for being is its fixed pellicle mirror. The see-through  mirror did NOT go up and down,  allowing for continuous viewing without the traditional SLR blackout and for very high motor speeds.

Pellicle disadvantages are slightly degraded image quality since the pellicle is always in the optical path, loss of about 1/2 f/stop of light to the film since light is directed to the finder, a slightly dimmer finder since all the light is not  directed to the finder for focusing,  and difficulty  keeping the pellicle clean since it attracts dust like a magnet.   Older pellicles, such as those in the Canon Pellix, have shown a tendency to yellow and separate.

With no meter, the High Speed had no meter switch.    Don't lose the special power cable, it won't be easy replacing it

Canon's High Speed affirmed Canon's commitment to the Professional market, proving Nikon was no longer alone.   While the F1 was competitive with Nikon's F2,  the 9 fps High Speed F1 was clearly superior to the Nikon F's slower 7 fps F High Speed that required mirror lock up.   It was the first time Canon clearly beat Nikon  for bragging rights in the great SLR race which continues to this day.

Canon has more experience with pellicle mirror cameras than any other camera manufacturer.  Canon made two standard production pellicle SLRs, the Pellix and the recent EOS RT, besides their special High Speed F1's and EOS 1.  Other than a Canon Hansa,  it's very difficult to find a rarer Canon.