In large format photography, there may be no Large Format lens maker more loved,  or more missed than the German firm of Goerz.  For decades, many photogs considered Goerz extensive lens line Large Format's best.

Goerz pioneered Super Wide Large Format photography with their Hypergon Lenses, very short lenses with phenomenal covering power (even by today's standards) of either 135 or 110 degrees.     I am not sure of the exact years of production, but I think it was roughly from 1910 to the late 1920's.    Yep, that's right.   Hypergons left the factory without lens coating.    Today   Hypergons  are quite rare and sought after, by both collectors and photographers. They were made in a variety of focal lengths.  Contrary to some opinions, they were made  with and without their famous "star" in front of the lens to equalize exposure to the corners.  Also, contrary to some reports, they were not designed for aerial photography.   Actually, the later Metrogon aerial lenses of the 1940's and 50's were copies (or at least close relatives)  of the Hypergon. 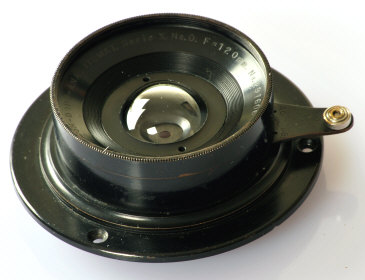 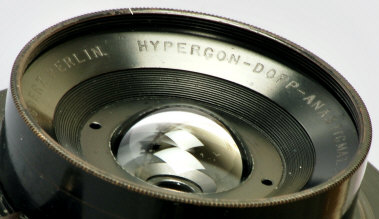 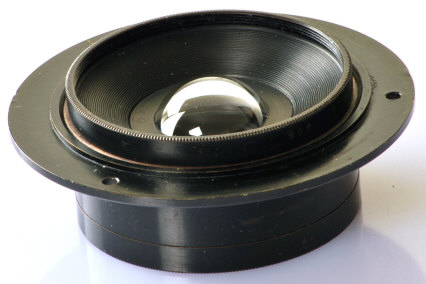 Goerz 000 Hypergon 60mm lens # 550537 with Star fan.   The "Star" could be swung in or out.  The tube on the left of the photo attached to a rubber tube with air bulb attached.  The photog squeezed the air bulb during exposure to spin the star with the whoosh of air, thereby equalizing the exposure to the negative corners.  Typically the exposure was divided between using the star, and swinging it out of the way.   Note Hypergons were not fitted with leaf shutters.   Either you used a focal plane shutter, or the special purpose lens cap removal device on the end of your arm. one potato, two potato etc. 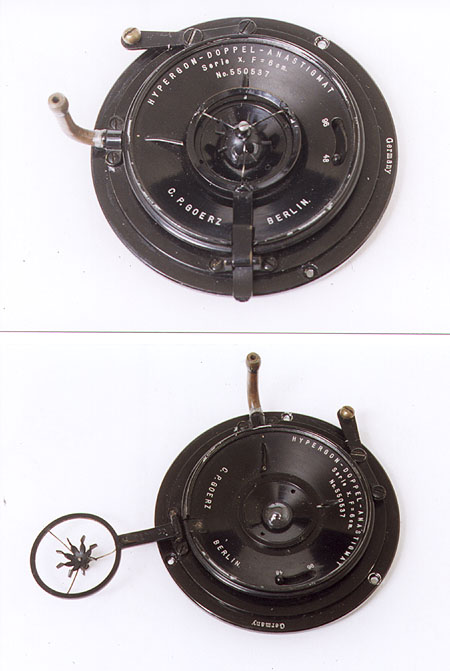 "The Hypergon has for several years held a unique place among wide-angle lenses on account of its incomparable covering power.  It is a symmetrical double anastigmat, consisting of two very thin hemispherical single glasses.  Astigmatism, spherical aberration and curvature of field are completely corrected, and the definition is sharp to the very edges of the plate.  The chromatic aberration is not corrected, but is eliminated after focusing by the use of the smaller diaphragm stop, f/31. The symmetrical design of the Hypergon insures complete freedom for distortion of straight lines.  The diminution of light toward  the margin of the image, unavoidable in a lens cutting such an extraordinary angle, is corrected by an ingenious device in the form a star diaphragm, which is rotated in front of the lens, by means of a bulb and tube attachment, during the exposure. (they are talking about compressing a rubber air bulb and using the air to spin the star)

The Hypergon is a special lens for wide-angle interiors, landscape, architectural and panoramic pictures, and it should not be purchased with the idea that it can be sued as a lens for general photography.  It cannot be fitted to between-the-lens shutters.

Hypergon Without Star Diaphragm -- We have recently introduced a new form of Hypergon without the star diaphragm.  This cuts a maximum angle of 110 degrees and requires no special adjustment to equalize the illumination.  This lens can be attached to most view cameras without special fittings.  It can be used for instantaneous cap exposures and flashlights, as well as time exposures."

Today the Goerz Hypergon is considered in the elite class of all time classic large format lenses.

Revised: January 19, 2011 .  Copyright © 1998-2011 Stephen Gandy. All rights reserved.    This means you may NOT copy and re-use the text or the pictures in ANY other internet or printed publication of ANY kind.  Information in this document is subject to change without notice.  Other products and companies referred to herein are trademarks or registered trademarks of their respective companies or mark holders.