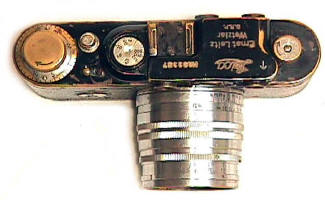 One of the most interesting areas of Leica collecting are Leicas with German military markings. The large majority of these are "Luftwaffen" cameras for the German Air Force.  Very few have been found marked "Heer" for the German army, and even less marked "Kriegsmarine" for the German Navy.

I am trying to identify and document the authenticity of what appears to be an amazing Kriegsmarine Leica II, with a possibly even more amazing story behind it.

It is a black Leica II made in 1932, with a 50/1.5 Xenon made in the first year of production 1936, marked in meters without "Taylor-Hobson Pats." There is also a black/nickel 35-135 finder. I bought it from an American dealer, who bought it after it was sold at auction in Uruguay.    From there, the closer you look at this camera, the more mysterious it becomes.

#1 On the bottom plate is engraved "KRIEGSMARINE" and then immediately below that "MF. 002.017" At first many Leica collectors told me that the camera was a fake since "MF" numbers were not used by the Kriegsmarine. But I continued to do research and found my answer in the October 1974 issue of the American Leica Viewfinder magazine, page 16. It has a picture of a Kriegsmarine camera with the eagle, with "MF 630" below the eagle. It was reported by Jim Lager.

I have been informed by Mr. Harold Zeilinger that MF stands for Marine-Flieger, which roughly translates to Navy-Air Force or Navy Flyer.   He reports that a few Contax II's have also surfaced with the MF engraving.  Many of the larger German warships had float planes, including the Graf Spee.     Other opinions maintain it is NOT Marine-Flieger.

Of all the Germany Military engravings, the MF engraving is among the rarest.  It is so rare, many experienced Leica collectors have never heard of it - - much less seen it.   For this reason I tend to believe the camera is genuine, even though it is so different than other reported Military Leicas.

#2 UNDERNEATH the "KRIEGSMARINE" engraving is "LUTZ FERRANDO BUENOS AIRES" This suggests the camera was originally exported and sold in South America, probably Buenos Aires, sometime after 1932. Many German ships visited South America before the war, Navy and civilian.  Another possibility is that the camera was simply repaired in Argentina, and engraved then.

#3 On the front of the camera, in the typical self timer position, is a black Swastika on a white background, with the Nazi Eagle sitting on top. The top of the eagle to the bottom of the Swastika measures 22 mm. The eagle's wings are 16 mm across. It appears the eagle and Swastika have been on the camera for a long time since they match the rest of the camera's wear perfectly.    The emblem seems to be an original Nazi emblem of some sort, transplanted to the camera.   Perhaps someone knows if it came off a uniform, or medal or ?? 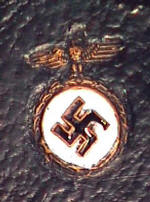 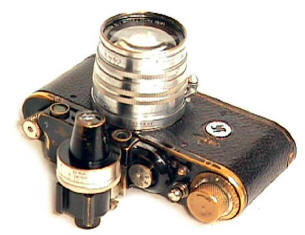 #4 It is very unlikely that these engravings were done by Leica. According to Don Chatterton, military Leicas are known to have been custom engraved to their owner's liking at fine jewelers. It is quite conceivable a Navy officer acquired the camera and installed the engravings with swastika.

#5 It should not be missed that the 50/1.5 Xenon was a very expensive "super" lens at the time.   It was  much sought after and difficult to obtain, especially in wartime. It would seem the original camera owner had some money and some influence.

#6 ALL three items, the camera body, the lens and the finder, are marked with "Arrows" which point outward towards whatever the camera is focused on.  While I thought these might indicate British Military Property, it turns out they are not the right sort of arrows for that.   It seems more likely they are "runes" which were popular with various Nazi organizations, including the Hitler Youth. 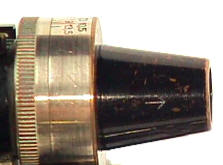 So, we have a Leica sold in South America, with an expensive fast lens, presumably decorated by a Naval officer, engraved "Kriegsmarine"

What could all this add up to?

The key probably lies with the meaning of the "MF" # and tying it to a particular inventory.

Can you help with any part of this mystery? Issues include:

1) What is the full meaning of the full MF number? The Nazi's kept incredibly detailed records. I can not help but think that someone out there knows what the MF is, and can link it to a particular unit, ship, or even officer!

MF markings have shown up on other Kriegsmarine Contax and Exakta 6x6 cameras.   There is no doubt they were used by the W.W.II German Navy,  but the exact means remains a mystery.

I've asked dozens of "experts" what the MF stands for.  None so far have a definitive answer which can be authenticated, nor do they have a clue as to the meaning of the numbers following MF.  With so many military collectors, it is strange to me this information has been so difficult to obtain.

2) The MF number and rune arrows are both EXTREMELY rare Nazi military markings.   The eagle and swastika have not shown up on any other period Leica that I have been able to document, though they are used on many fake Russian military "Leicas."    Personally it seems very unlikely anyone would have faked this camera -- the markings are so rare that the authenticity question immediately comes up, making the camera difficult to sell.   Forgers wants quick easy money,  something which can be sold easily.

3) I am of the opinion this is an authentic Kriegsmarine camera, with seemingly a very interesting history.   Due to the high speed 50/1.5 lens, it was VERY expensive and difficult to obtain  when new.  It was apparently sold in Argentina, and then taken over in the Kriegsmarine.  Due to the high value of the then super speed 50/1.5 lens,  and the Nazi eagle and swastika,  I'm guessing this was the personal camera of a Kriegsmarine officer who was also a Nazi Party member.     I expect the MF code to go a long way to solving this mystery, if it can ever be deciphered.

4) Is there anyone in Uruguay who already knows this camera and the story behind it?

"Keep in mind that the "arrow" was also the runic "T", just as the "lightning
bolt" was the runic "S," (as in SS). It represented the powerful Norse god
Tyr.   The Germans were fond of their presumed connections with the Nordic gods  and used runes in many of their unit insignias. The "arrow" (runic T) was one of their favorites."

"I'm no Leica expert (although I wish I could afford to be), but I do know
that the British War Ordinance markings are quite different from the arrows
shown on the Kriegsmarine Leica. The mark adopted by the War Ordinance is of  three equal-length arms, and not as seen on the Leica. The marking actually
is an abstraction of three muskets forming a tripod on the ground, resting on
their stocks and with their bayonets crossing; they were a stable way to be
left ready at night on the battlefield. This symbol was used as the logo
for, among other companies, BSA motorcycles and automobiles. Of course, BSA  stood for Birmingham Small Arms, and had been making military firearms since  the mid-19th century."