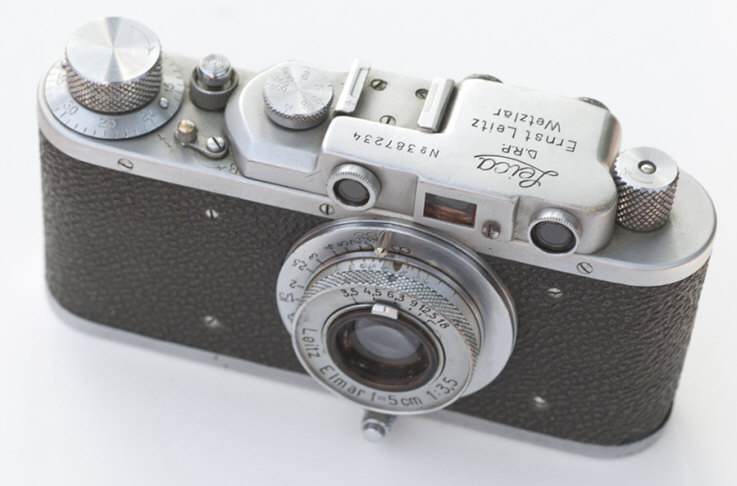 Pictured here is a nicely done fake Barnack "Leica II" # 387234 with fake Leitz 50/3.5 Elmar lens.  Once upon a time before the internet was popular (mid 1990's)  entrepreneurs could turn a quick dollar by remanufacturing an official Russian Zorki or Fed into a reasonably believable "Leica."  It worked too, because the info on how to spot Leica II fakes quickly was not all that well known or easily shared before the internet.   I like this particular fake because its rather well done and an interesting part of pre-internet Leica collecting lore.    # 387234 has just had a CLA and is for sale at $400 with fake Elmar lens. 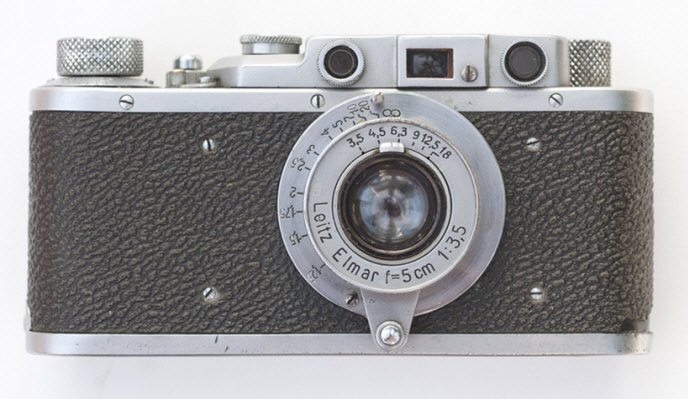 The first tip off of its Russian heritage is the raised frame around the viewfinder window.  On Russian Feds and Zorkies that viewfinder frame extends ALL the way to the top of the top plate (like this one).  On real Wetzlar made Leica screw mounts aka "Barnacks," that frame does NOT extend to the top of the plate.  The nice thing about this viewfinder ID giveaway is that its easy and quick to spot, even if you are at a camera show viewing a group of cameras on the dealer's table.  That alone confirms the fake's Russian heritage.

Notice there are no strap lugs or slow speeds. IF this particular camera were a real Leica, it could only be a Leica II -- CLICK FOR INFO. The later Leica III had both slow speeds and strap lugs.

Perhaps the nicest part of this fake attempt are the top plate engravings.  "Leica" looks rather convincing, though the oddly shaped D in DRP is not so real looking.  Notice the concentric circles on the shutter release like the Feds and Zorki. Real Leicas had solid release buttons - no rings. 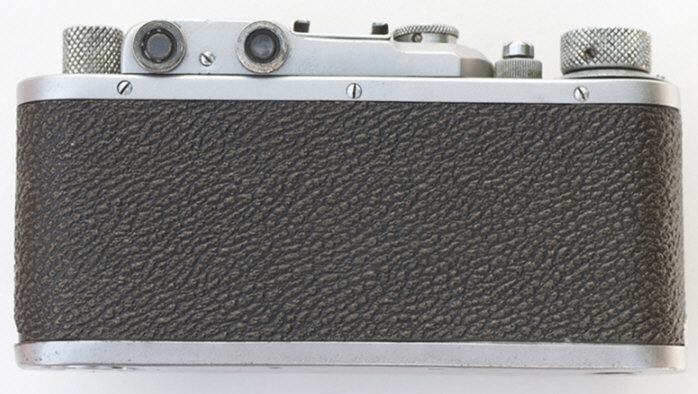 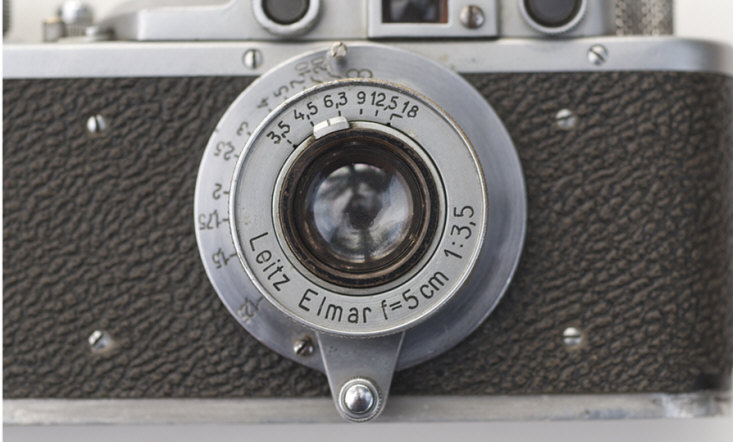 The lens has a slight scratch on the front element - not that it will effect pics much LOL.

The next big ID point is the rangefinder cam - that's the connection between the focusing cam on the lens and the actual rangefinder mechanism built into the camera's body.  Real Leica Barnacks ALWAYS had round roller cams, Feds and Zorkies had lever activated rangefinder cams, like the one pictured here.

Wetzlar Leicas had film loading diagrams, Feds and Zorkies not so much - though of course they could be added. 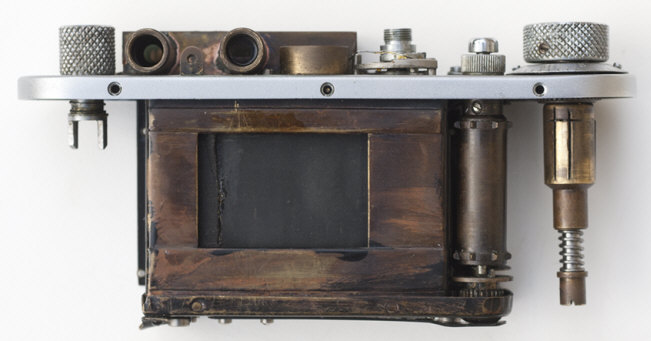 You guessed it, Leitz Leicas did not look like this inside! 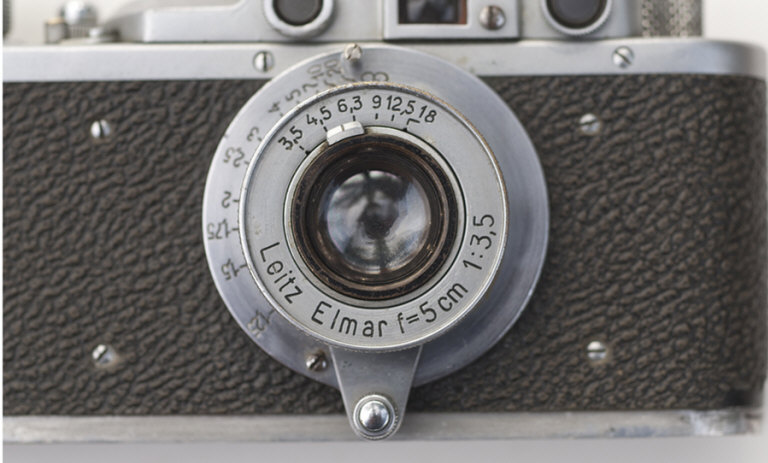 Not when its a converted Russian Industar which was a copy of the original Leitz Elmar! 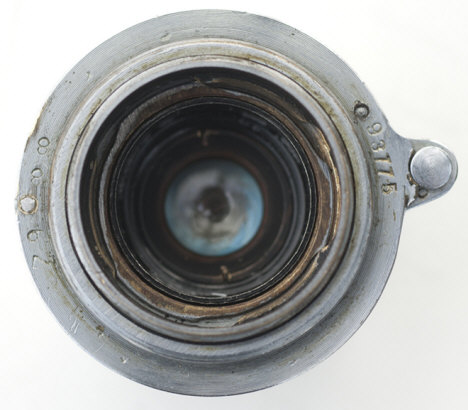 I receive more emails than you might expect about identifying "fake" Leicas.  Most of the them concern ridiculous obvious fake military "Leicas" - the likes of which never even remotely saw the light of day at the Leitz Wetzlar factory, cameras mostly like THESE.

Some emails  concern possible fake Leica M2's & M3's.  Well, truth is, if you EVER see a fake Leica M2 or M3, its so well done that it will fool virtually anyone - including the "experts."   Fake Leica M2 and M3's are only expensive collectibles, usually worth $10,000 or more.  I was told by one Leica insider that the only way to recognize the superb Polish Leica M fakes was to carefully disassemble them, comparing them to known less expensive Leicas.   The difference?  The fake Polish Leica M were better made than the Leitz originals!  Once upon a time, an internationally famous special one off presentation Leica M was sold by a famous British auction house.  Unfortunately the completely documented original resided in an American collection.  The real owner contacted Scotland Yard, who was ready to pursue the matter.  The dealer who bought the fake let the matter drop  - the camera was most likely already SOLD!   Understand I am not talking about repainted black M's  that used to be chrome, or real M cameras converted to rarer more valuable models.  I am talking about high end replicas that were made from scratch to be better than the best Wetzlar Leicas.  Lots of luck on recognizing the true lineage of such a beast! LOL.

Revised: February 16, 2012 .  Copyright © 2012 Stephen Gandy. All rights reserved.    This means you may NOT copy and re-use the text or the pictures in ANY other internet or printed publication of ANY kind.  Information in this document is subject to change without notice.  Other products and companies referred to herein are trademarks or registered trademarks of their respective companies or mark holders.