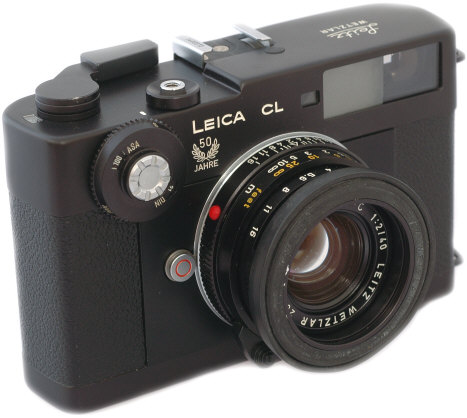 If you want a lightweight carry-all-day sophisticated camera with great lenses, it's difficult to make a better choice than the CL.

Sometimes disparaged because of its made in Japan heritage, the CL occupies a unique and important spot in the Leica M world.      Introduced in 1973 and discontinued only three years later, the Leica CL is the smallest and lightest interchangeable M mount rangefinder.

Leica CL mounting 40/2 Summicron with collapsible rubber shade.    Note the very conveniently placed shutter dial which can be used without removing your eye from the viewfinder.  This camera is the Leica 50th Anniversary version CL (1925-1975).   A brand new Minolta CL was my own first M mount camera, bought within the shadow of the Hermosa Beach pier at Newman's Photo. 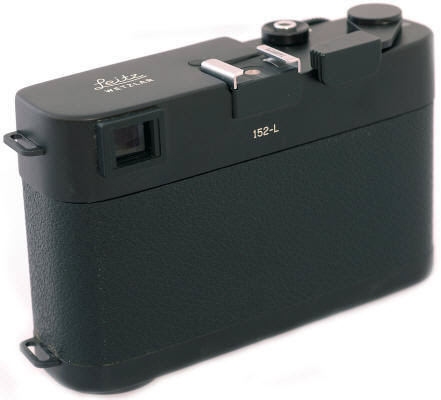 The CL is a terrific camera, yet the CL's biggest problem is comparison to big brother, the legendary Leica M. But the comparison really isn't fair since both cameras were designed to do VERY different things. The CL successfully met its design criteria by providing a small low cost M shooting platform. Ironically the CL failed in many eyes because it wasn't a M camera. It seems what we have here is a failure to communicate.

The CL is the smallest Leica shooting platform for either M or screw mount lenses. This is really a big deal since Leica photogs are legendary for preferring small cameras. On top of that, it even has a built in meter! As far as I am concerned, every Leica photog should have a CL in their bag for just these reasons.

Designed by both Leitz and Minolta,  CL bodies were made by Minolta. Three different versions proclaim "Leica CL" or "Leitz-Minolta CL" or "Minolta CL." The Leitz-Minolta version was sold in Japan while the Leica CL version was still being produced.   After Leica CL production stopped, Minolta continued the Minolta CL, even exporting it to the US.  The rarest CL is the 50th Leitz Anniversary model, of which 3500 were made.  The back of the anniversary CL have a special xxx-X code which corresponds to the numbers 1  to 500 and the letters L-E-I-C-A.   That means the 152-L camera above is the 152th of the 3500 50th Anniversary CL cameras.  Note the very convenient vertical hanging camera straps.

The CL's CDS cell is on a "flag" which meters directly in front of the film plane, rising just before the first shutter curtain opens.  The front mounted shutter dial is compact, but all VERY convenient in operation. 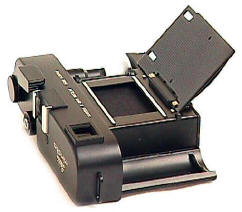 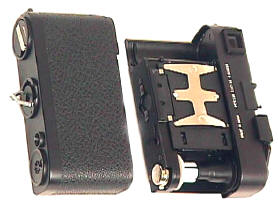 The CL's removable back affords easy film loading.  Notice the pressure plate that folds over the film.

A single Mercury 625 battery. New  US non Mercury replacements have slightly different voltages. Your camera repairman can adjust the meter for accuracy.   Of course the easiest thing is to buy them out of the US, where they are still widely available.   The battery slides into the end of the film advance mechanism.

Frameline NOTES: While the CL has automatic built in framelines for the  40, 50 and 90  there is not complete frameline compatibility with the other M cameras.

The CL's 40mm frameline is always visible.   The 50 OR 90 frameline  additionally shows up when you use a 50 or 90 lens.   With the 40 frameline always visible, it isn't too difficult to imagine a 35 frame on its outside edges.

Slow speed shutter reliability and Meter reliability are problems which I have seen in print, but never personally encountered in owning about a dozen CL's. I know from a former Leica technician that the CL went through SIX internal design changes in its short life. The various editions may well account for the different reliability reports.

Incompatible CL Lenses??? When the CL was new, Leica made it clear the CL's 40/2 Summicron and 90/4 Elmar (or the 40/2 and 90/4 Rokkors for the Japanese market) may not focus correctly on M cameras. The reason given was the different shape of the CL lenses' focusing cam. As time went on, users became more and more suspicious that this incompatibility claim may have been marketing hype so the inexpensive CL lenses would not decrease sales of the more expensive M lenses. Perhaps some CL lenses really don't focus accurately with some M bodies, but I have yet to see it. This issue is a matter of hot dispute, depending a lot upon how much you trust father Leitz.  The Voigtlander 50/2 Heliar is the only collapsible 50 I know of that can be safely collapsed into the CL.

Focusing Accuracy Surprise! To make a smaller camera, the CL uses a smaller Rangefinder. It will do the job fine within the limits it was designed for. But go beyond those limits and you might not like the results.   Note this has no real world disadvantages with super wide angle lenses!

In practical terms, the CL's Rangefinder is accurate enough for 50 mm or shorter F/2 lenses or 90/4 lenses wide open and close up. You can use faster lenses accurately if you just stop them down to the CL's practical limits.

Sometimes you will hear it said that the CL can't use lenses longer than 90mm. Not exactly true. By focusing on infinity, or by stopping down, you can overcome the decreased focusing accuracy of the CL's small rangefinder.

The CL can use fast telephoto lenses or 135 lenses WIDE OPEN if your subject is focused at infinity. At infinity it makes no difference if your 90/2 is wide open or not--it's still in focus. The CL has no trouble taking an accurately focused infinity shot with ANY rangefinder coupled lens you can mount on it. The superlative 135/4 Tele-Elmar is the best lens for this trick. It's only at closer distances when the CL's smaller rangefinder may not be accurate. Of course, you could also bypass the rangefinder and scale focus. I would also suggest an auxiliary viewfinder, see profile. You can use the 135's at closer distances too, if you just stop the lens down to it smaller F/stops. F/8 or below should do it.

M Lens Incompatibility Some M lenses will not fit on the CL due to the different finder setup. Forget the all M3 wide-angle lenses with eyes, the 135/2.8 Elmarit with eyes, the 50/2 Duel Range Summicron with eyes. You should not collapse the normals or the collapsible 90/4 Elmar into the CL's body as it may damage the meter. Wide angles which protrude too far into the body are also problems. These include the 21/4 Super Angulon and the earlier 28/2.8 Elmarits before # 2314921 and the very rare 15mm Hologon.

Rokkors Vs Leitz Lenses I believe the same focal length CL lenses will give you the same results, whether it's a Leitz or Minolta 40/2 or 90/4. Strangely enough, the 90/4 Rokkor is actually a German produced 90/4 Elmar with the Rokkor name on it. The Leica mystique being what it is, you can save a few bucks if you choose the Minolta CL and Minolta lenses. The German lenses use Series 5.5 aka 40.5mm. The Rokkors use the Japanese JIS standard thread, and so will not accept the German filters.

The CL as a Super Wide Angle Lens Platform

The CL's limitations are not limitations at all with super wides.    Wide angles are easy to focus so a long rangefinder is not required.  In fact, it's so easy NO rangefinder is required and scale focusing becomes perfectly practical.  The lack of wider than 40 framelines becomes a non-issue since 25 and wider lenses need accessory viewfinders on virtually all M mount cameras.  The CL's short effective rangefinder base length and limited framelines are no limitation at all for wide than 28mm lenses, since only the Voigtlander R4M/R4A bodies have wider than 28 framelines built in for 35mm film photography. 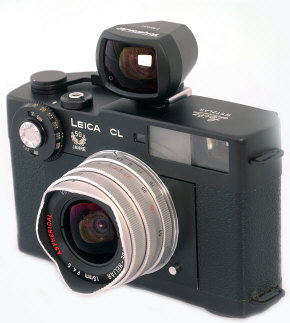 Above are the super wide Voigtlander 12/5.6 and 15/4.6 lenses mounted on the CL via a screw mount to Leica M mount adapter.   These particular lenses are scale focusing.  Focus with the distance scale on the lens, compose with the viewfinder in the hot shoe.  ALL of the Cosina Voigtlander Leica mount lenses are compatible with the CL so far as the CL's metering cell is concerned. See Voigtlander Price List 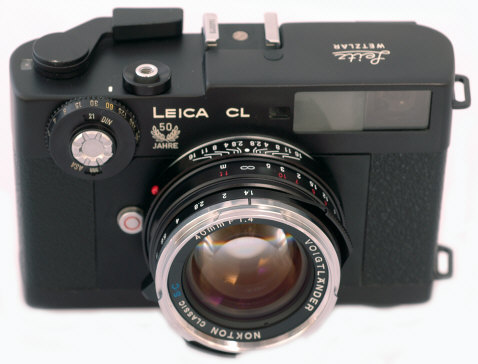 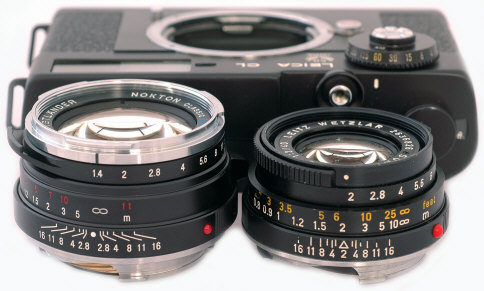 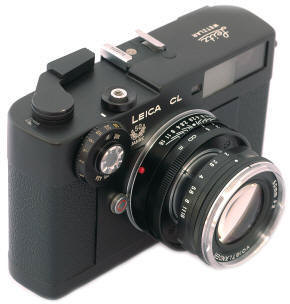 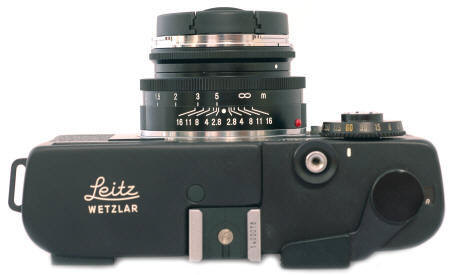 Contrary to all the warnings Leitz issued about not collapsing their 50mm lenses into the Leica CL's body, the Voigtlander 50/2 Heliar lens CAN be safely collapsed into the CL with fear of hitting the meter cell! See Voigtlander Price List

Leica CL Production Mystery Solved - - or at least part of it

Many Leica reference books state something to the effect that 65,000 numbers were allotted, but less may have been produced.  The same words, or variations of it, are repeated in Leica book  after Leica book.    What could that mean?   that  65,000 were allotted but only 64,000 made, or only 5,000 made?

The importance of the figures, and the problem of not having an exact figure, is  Leica's official story for the CL's demise is the claim the CL  was not a commercial success.   Yet,  65,000 production CL's would  FAR FAR FAR eclipse M production during those years.

In other words, why discontinue your best seller???????

Mr. Horst Braun, head of the Leica Repair Department in Solms,  was kind enough to provide me with CL production figures. He states "The CL was manufactured in batches. The ser.nr. batches are as follows:

A small amount of cameras, estimated at 100, did not pass quality control. This accounts for the much quoted "less may have been produced."

According to Dennis Delaney in Leica Collector's Guide,   Leica actually intended to STOP  M production in 1976 due to rising costs at Wetzlar and lack of capital.       Things must have been looking pretty grim sales wise.   It would seem that the sale of something like 85,000 small compact CL bodies over about a 5 year period might have had something to do with the M sales slump....make that the M sales disaster.

During its life, CL's outsold the M's more than 2 to 1.   Yet the official reason for the CL's demise that it was not a commercial success.    Could it be that slumping M sales and the realization it was a small market had something to do with the CL's exit?   Did the CL die so the M could live in a smaller marketplace?

Of course, "commercial success" can mean different things.  Though the sales were high, if the profit was low after paying Minolta's production costs, perhaps that is part of the answer too.

If you want a lightweight carry-all-day sophisticated camera with great lenses, the CL is a nice choice BUT getting parts to repair them is a REAL problem.

The CL makes an ideal 2nd body to your M for those lightweight situations where you don't want to carry a heavier camera.

The CL also makes an excellent first choice if you want to get into the M system inexpensively--so long as low light photography and fast lenses are not your plan. 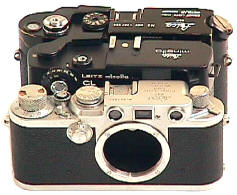 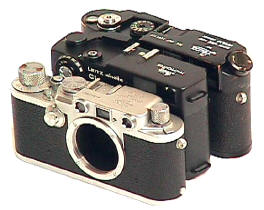 Side by side: the Leica IIIf, CL and M4.

Revised: August 13, 2011 .  Copyright © 1998-2011  Stephen Gandy. All rights reserved.    This means you may NOT copy and re-use the text or the pictures in ANY other internet or printed publication of ANY kind.  Information in this document is subject to change without notice.  Other products and companies referred to herein are trademarks or registered trademarks of their respective companies or mark holders.