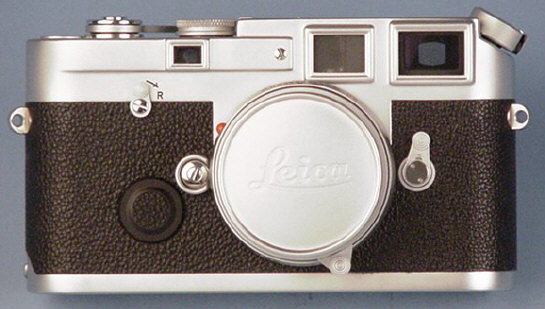 Imagine a "classic" M6 made with the traditional craftsmanship of the classic M3. That was Leica's aim in  producing   the special 40th Anniversary M6J  1994.  Many consider it the ultimate M6, a view I happen to agree with. The craftsmanship and finish is, quite simply remarkable in this age of plastic.  Predictably, its  high price keeps it out of the hands of most shooters, most likely safely locked away in its presentation case.    Look closely at the top plate shape,  ridges around the top plate windows,  advance lever, the non plastic frameline preview and rewind levers, the chromed lens release -- like the M3.  Production was only 1640 cameras, 40 cameras for each year of the 40 years of M production. 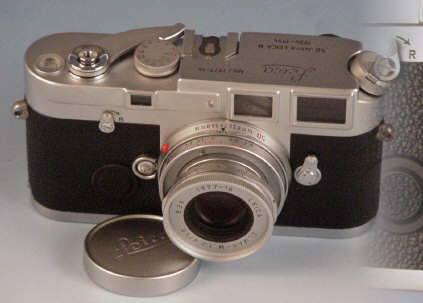 Unlike the M3, the M6J has TTL metering, hot shoe, motor drive connection, and an M4 style rewind crank, and a M6 style battery chamber.     Using a .85 magnification finder rather than the M3's .91,  the M6J provides almost the same focusing accuracy while also adding a 35mm frameline -- something the M3 never had.  Unfortunately for 75/1.4 Summilux fans, a 75 frameline was not added as well.  Notice the classic style chrome  lens cap. 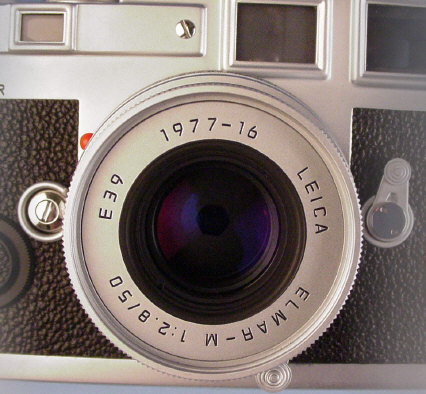 The M6J was sold only with its own special 50/2.8 collapsible Elmar, which shares the same serial number as the camera. While the exterior barrel and finish live up to the classic 50/2.8, and the optical formula is a modern improvement over the original, the filter ring engraving looks rather cheap in my opinion compared to its classic ancestors.  This shot shows the details of the M3 like lens release, preview lever, and ridged top plate.

The M6J was something of celebrity just for its finder when introduced in 1994 -- forget the rest of the camera.  Not only was the M6J's finder the first higher than .72 magnification Leica M finder since the long discontinued M3, the M6J  finder had the 35 frameline and TTL metering that the no M3 ever had.    You guessed it, a few people were willing to pay the not inexpensive price of having their .72  M6's converted to the .85 M6J finder.    Perhaps surprisingly,  the Leica parts department was willing to sell the M6J finder separately -- as a replacement for the M3 finder which they had run out of .    The conversion worked fine,  but if you wear glasses, the 35 frameline in the M6J finder is very difficult to see.   With the M6J soon sold out, Leica received many requests  for a regular production M6 with the higher magnification finder.    The .85 finder M6 finder was introduced in the Leica M lineup four years later in 1998.   Though similar, I'm told the M6J finder and the M6 .85 finder have internal differences besides the addition of the 75 frameline in the .85 finder. 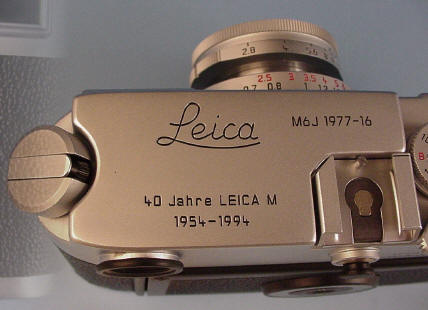 The top plate is engraved with the beautiful classic Leica script.   I think this was the first time the Leica script engraving was used   after the M5 was discontinued.   Besides the "40 Jahre LEICA M   1954-1994" engraving, the special serial number indicates a year of M production (a range from 1954 to 1994),  and a number range of 1 to 40 for that year.    The special 50/2.8 Collapsible Elmar has the same serial number as the camera body.  If matched lenses and bodies are separated,  pity the collector trying to re-unite the matched pair. 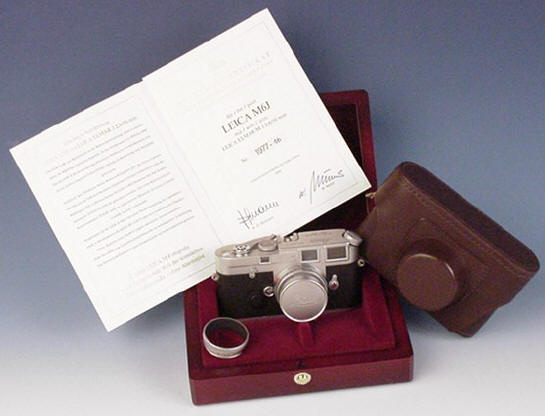 The full M6J outfit includes the M6J with special matching 50/2.8 collapsible Elmar,  wooden presentation case, classic style lens cap and shade, specially made vintage case, and certificate of authenticity.   M6J prices started out high, and have stayed high.  Personally I consider it one of the best and most desirable M6 special editions.