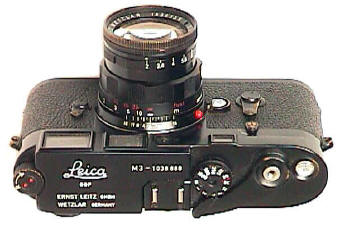 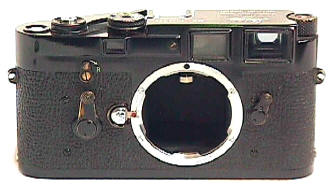 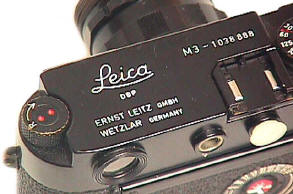 The black M3 is one of rarest and most sought after Leica collectibles.  I admit I love them too, but when you look a bit further, it's yet another tale from the Wacky World of Leica Collectors.   Official Leica lists only 1,320 made out of over 225,000 M3's.

Yet,  black was a standard  option available for only a few dollars more. The funny thing is black M3's were not too popular while the factory was making them. Only after the black paint bodies were discontinued and recognized as rare did collectors want them.   The same thing happened with the Leica 72, which was a commercial failure but a huge collector success.   Note the engraved Leica script nameplate which disappeared as standard after the M5.

Another strange thing is "the list."   When an experienced collector first sees a black M3 (or M2 or M4), their first question is usually  "Is it on the list?,"   referring to the official Leica list of production black M3's numbers.  A camera "on the list" is worth at least 3-4 times more than one "not on the list."   The problem here is avoidance of fakes and economic realities.   Leica did indeed make black cameras which were not "on the list," either by special order or by refinishing a chrome camera.  Even if genuine, such a Leitz made black camera is worth much less than one "on the list," since there is no way of being sure  it  came from the Leica factory or a talented refinisher.   Of course experienced Leica people can be relatively sure such a camera is genuine, the economic reality is that even if they are sure, without Leitz documentation, it is still worth a lot less money.   How can an inexperienced person know if its a genuine black finish?   Take it to an expert.

To top off the black M3's climb to fame and serious fortune,   the original black M3's and M2's did not have that great a finish. The paint was not too durable and was easily scratched.  Over a period of years the acid in the photog's sweat would eat the paint off in a kind of blistering effect.  Strange but true.  The majority of black paint M3/M2/M4's are in rather poor condition, as they were often used by pro photogs who -- for whatever misguided reason -- actually used these precious collector's items to take pictures.    No accounting for taste, I suppose. 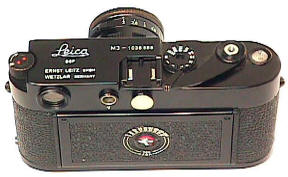 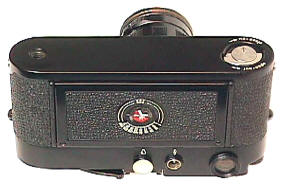 Remember that black paint was the original finish for Leicas, starting in 1925. Originally chrome was seen as a deluxe, more expensive finish starting with the Leica II.  All black M3's and M2's are paint, at least if they left the factory black.   Occasionally you will find a black chrome M3 or M2 customized by some intrepid restorer.  There is some discussion if the black paint and black lacquer listed in factory records are really one and the same finish, or not.   Anyway, black paint continued until about half way through M4 production.  The later black M4's are black chrome, like the then current production M5 which introduced the "new improved" black chrome finish.  Initially the black chrome finish was generally thought to be an improved, tougher finish.

Remember the song that says "You don't know what you have till it's gone?"    That pretty much describes many Leica lovers view of the black paint M.  A funny thing happens to black chrome bodies as they age, they become downright UGLY and DIRTY looking---at least in many eyes, including my own.  In contrast, many see an aged and brassy black paint M as having a certain beauty and dignity about it.  True, this depends up on the eye of the beholder.   Anyway, enough people have been complaining about the disappearance of the black paint M that Leica is finally going to reintroduce it with a special edition M6 in the year 2000.  I predict a quick sell out, with Leica returning to black paint as an optional finish.  Anyway, the scarcity of black paint M's and the demand for them have sent prices well beyond the roof. 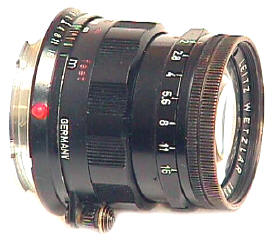 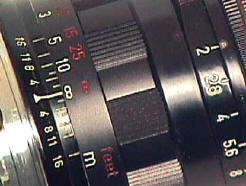 The black paint lenses were not the only accessories for the black M3, M2, and M4.  Also made were black enamel MC & MR meters, front lens caps, and body caps.

You don't have thousands to spend on a black paint M camera that is too expensive to take pictures with?  Not a problem.   Yes, you can have your old chrome M3/M2/M4 repainted black.  Modern paints will even make it much more durable than the original black paint M's.