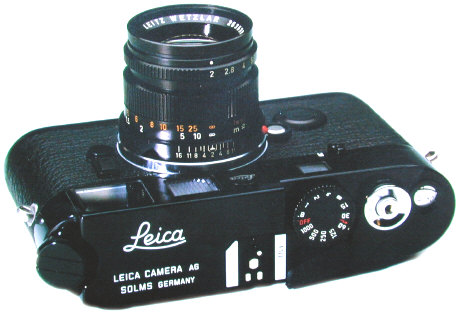 The last regular production Black Paint Leica Rangefinder was the M4 in the early 1970's.  Since then, though the later production M4, the M4-2, the M4-P, the M6, the M6 .85, and early production M6 TTL, Leicanuts have always lamented the passing of the beautiful Black Paint M, and its beautiful Leica script on the top plate.     Earlier this year Leica issued the Black Paint Millenium M6.   It is a retro style M6,  with a M3 type film rewind.   The Millennium's quick sell out and great popularity is said to have come as quite a surprise to Leica.   Only a few months after their introduction, some have sold for almost twice their original list price due to high demand.

About three years ago, before the Millenium M6 project was started, the Leica Historical Society of America (LHSA) approached Leica about making a Black Paint M6.  The object was to make a camera which cosmetically looked as close to the Black Paint M4's as possible.  Originally these were to be based on the non-TTL or "Classic" M6 body,  but the introduction of the TTL body and the lack of the old style bodies changed that.    It was not as easy as I would have guessed.   Getting a high quality black paint finish was not easy, when Leica no longer had painting facilities.      Surprisingly, the "Leica" script on the top plate was not an easy task.   The rumor is that the Leica Camera company no longer owns it !!  Though the various corporate transformations over the last few decades, the Microscope side of the company owns rights to the trademarked "Leica" script.   The Leica Camera company had to pay a license fee for its use !     Neither were the new top plates and bottom plates easy.  Instead of standard magnesium M6TTL parts, these had to be machined from brass in order to take the paint properly.   Please note that although the camera is illustrated with a 50/2 Summicron,  no lens is supplied with the camera. 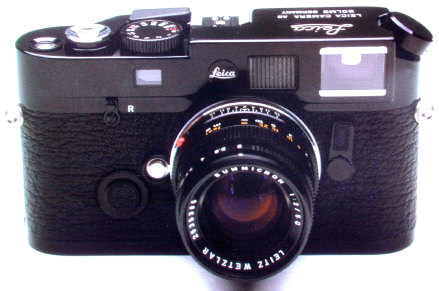 Leica's Red Dot is Black on the LHSA M6

All  hurdles overcome, LHSA   succeeded in offering LHSA members one of the most handsome of all M6 cameras.

This page has been approved by LHSA President Bill Rosauer for accuracy concerning the LHSA M6.   Any opinions expressed here are my own, without LHSA endorsement.     All photographs on this page are courtesy and copyright of LHSA, all rights reserved.

October 26, 2000.   Per Leica USA President Roger Horn to Bill Rosauer, 650  .72 and 500 .85 LHSA M6's were ordered.    As this is written, all have not been delivered, but are expected to be by the end of this year.  Contrary to some rumors, orders were not extended beyond the June 30th deadline.  Originally orders were only to be taken through LHSA, but orders were being made much more slowly than had been anticipated.  As a result, orders were opened up through Leica dealers, which greatly expanded sales.

So far the LHSA M6 seems to be generating a LOT of collector interest.   The first delivered batch of .72 LHSA have sold a big premiums when offered for sale.   Many people have wanted to order them after the June 30th cutoff, driving up prices.

Sixty of the 500 .85 cameras were factory converted to .58 LHSA, producing one of the rarest Leicas ever.

It's interesting that this LHSA special edition Leica has been so successful.  Bill Rosauer hit it on the head as far as   what Leica buyers wanted, and Leica thankfully listened under the new management of Mr. Cohn.   Rumors have it that black paint finish will become a standard option for the M6 in year 2001.

There were three previous LHSA cameras, all notably less successful in terms of sales:

October 4, 2003.   A new LHSA MP  made in grey hammertone, with matching Leicavit MP and 35/2 is confirmed.   Production 1000, commemorating the 35th anniversary of  LHSA 1968-2003.  Available January 2004.  The grey  hammertone is a particularly handsome finish and should be very popular with collectors and shooters alike.  The set consists of a grey hammertone MP, grey hammertone Leicavit M, retro styled chrome 35/2 ASPH, and even a grey hammertone vented shade.  The body is covered with the same vulcanite like material used on the Leica O.  Another added benefit is that the grey hammertone finish is predicted to be very durable.  The back of the camera and Leicavit are engraved with the LHSA logo, followed by "SPECIAL EDITION 1968-2003".    It is pictured on the cover of the LHSA Viewfinder magazine, Third Quarter 2003 edition.    To my eyes, this is one of the best looking M's ever.

Revised: April 23, 2005 .  Copyright © 2000-2005 Stephen Gandy. All rights reserved.    This means you may NOT copy and re-use the text or the pictures in ANY other internet or printed publication of ANY kind.  Information in this document is subject to change without notice.  Other products and companies referred to herein are trademarks or registered trademarks of their respective companies or mark holders.