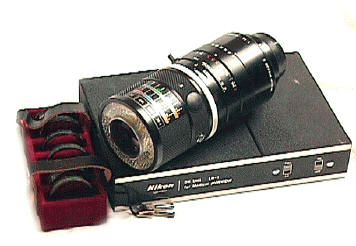 200/5.6 with built in Ring light flash and modeling lights  -- Great for close-ups of small objects

This is one of the best close-up systems ever devised.  If you photograph small objects, whether medical pics or stamps or coins or whatever, this is one of your best choices, giving classic shadowless ringlight lighting with its built-in electronic flash.

In 1962, well before the advent of automatic flash exposure or TTL flash metering, Nikon introduced a new breakthrough design for close-up photos in the 1/15x to 3x Macro range with automatic flash exposure -- the 200/5.6 Medical Nikkor.     Nikon did it by ingeniously combining a ringlight strobe with a specially corrected system of close up lenses in a non-focusing lens.    The lens is fixed focus, but that  focus varies with the close-up lens combinations.      To focus, the photog moves the subject or camera until correct focus is achieved in the viewfinder.  It is actually a lot faster and easier to use it in practice, than to describe  in writing.      As if all of this were not enough,  the Medical Nikkor also has four built in 4.5v modeling lights and allows data imprinting on the film!

The ringlight flash output is adjusted by setting the ASA range from 10 to 800.   The five close-up lenses and master lens combine in various combinations for 11 close-up ranges from 1/15x to 3x magnification size.  The close-up lenses have the advantage of keeping the f/stop the same throughout the magnification range -- thereby avoiding the exposure calculations normally encountered as a lens is focused in these close-up ranges.    Since the lens is designed to use the ring light's illumination, no built in lens to body meter coupling is needed -- or provided.   It's worth mentioning that these were expensive units new, and they are not common items today. Two different models  of the 200 Medical Nikkor were produced. 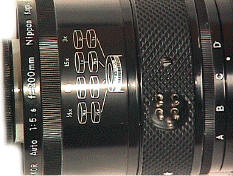 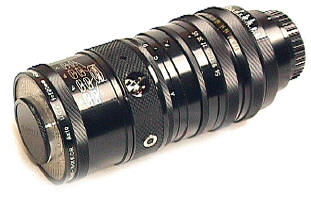 Note the "A, B, C, D" ring. This sets the exposure for the data imprinting on the right hand corner of the film for reproduction ratios or consecutive frame numbers from 1 to 38.      The lens is shown with front lens cap in place.  A   four prong power cord connects the ringlight to the power source.   The four pronged power cord of the 1st version is not the same as the power cord of the later unit.   A sync cord connects the lens to the camera. .  The flash output is 60w, with a flash duration of 1/500th second at 6000 degrees Kelvin.  Close-up lenses are stored beneath the lens.   The power cord and sync cords are stored in case lid.  Both AC and DC power units were available,  shown is the AC unit.    The DC unit was powered by either four D 1.5 cells or a 240V high voltage dry cell. 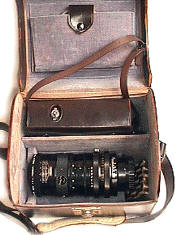 In use, the photog first sets the ASA setting, and then the chosen reproduction setting.  Each of these have lock screws.  The reproduction setting also automatically sets the f/stop.    Make sure the correct combination of close-up lenses is used for the chosen reproduction ratio.  Connect the power and sync cords, turn the power unit on.     The white button on the lens barrel turns on the built in modeling lamps.  Adjust subject to camera distance so the image is focused, and shoot.   Remember this is NOT TTL flash metering, but rather a variation of the guide number exposure.  Some subjects may require exposure compensation, so try a test roll before shooting a big job. 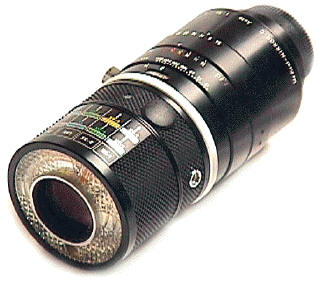 This version worked pretty much the same way as the earlier version.   Modifications included a three prong power cord instead of the earlier four prong cord, a new color coded combination chart of close-up lens combinations, and power sources which allowed a choice of 1/4 or full power.    Shown is the DC power source, LD-1.   The data imprinting capability was continued, but the power setting for the imprinting was dispensed with.

The 200/5.6 Medical Nikkor was discontinued in 1984, replaced in the Nikon lineup by the 120/4 Medical Nikkor of 1981 that replaced the 200's close-up lenses  with internal focusing.  No other camera manufacturer has introduced similar medical lenses with built in ringlight and modeling lights.  With their unique capabilities, many Medical Nikkors are still in use by hospitals  today.    It's unfortunate that hobbyist such as coin collectors, stamp collectors, jewelers, and miniature model makers have generally not recognized the Medical Nikkor's usefulness for their fields.