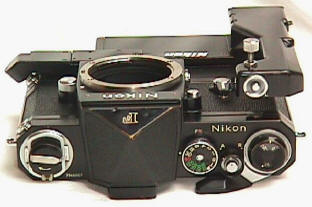 F cosmetics changed late in production  to match the then currently produced and just introduced F2.    The F was updated with a plastic tipped  F2 type advance lever and self timer,  and stronger camera strap eyelets.      The only Apollo variation that I know of is the PC connection.   The earlier Apollos had the standard F flash connection.  The later ones had the F2 type threaded PC connection.  Shown is a black Apollo with the standard prism, F36 motor and cordless battery pack.

Though popularly called the "Apollo" due to the USA Apollo space program of the early 1970's, I have never seen any evidence to link this variation with the space program.

The earliest "Apollo" might be  # 7256811 pictured in a Nikon instruction book.    Nikon usually brought out a new instruction book with new changes.    For some reason the change was actually made much later, probably about 7335000.  That would make approximate "Apollo" production about 116,000 cameras--or at least that is my current best guess. 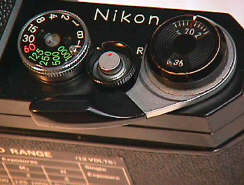 The plastic tipped advance lever and self timer identify the F "Apollo."  This early "Apollo"  has the standard unthreaded  PC connection.  Note that if you had the parts, earlier cameras could be updated to the "Apollo."

Some collectors pay big premiums for the "Apollo," usually out of proportion to their abundance. The only ones worth  premiums are the last five thousand or so, because they were the last F's.  Officially the last F was number 7451052, but later cameras which appear to be original have been found.