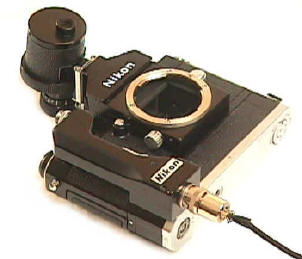 To my mind anyway, this is Nikon's strangest camera. Made for the 1972 Olympics, Nikon achieved  7 frames per second motor speed (compared with the standard F's 4 fps with the mirror locked up) in this, their first High Speed SLR.   Unfortunately to do it,  the photog locked up the High Speed's mirror and proceeded to shoot through a 135 to 300 zoom finder.  That's right Sherlock, the 7 fps F High Speed gave up SLR viewing at its highest speed --   turning the High Speed  into a glorified motorized viewfinder camera.

Exact Nikon F High Speed production is unknown, but very limited.  According to a friend of mine who got his information from an insider at Nikon, only about 30 of the 7 fps were made.  In 1976 seven of the 7 fps were converted to the 9 fps model for the Montreal Olympics.    According to his source,  four of the 7 fps were sent to the Olympics with Canon Pellix pellicle mirrors!!   Frankly I have no way to verify this information.     Robert Rotoloni estimates 7 fps production at 54 cameras in his March 1997 article published in the Nikon Historical Newsletter.    He further recounts rumors of 20  9 fps cameras being supplied as loaners at the Montreal Olympics.   My Links sections has the Nikon Historical Society where you can join, and get back issues. 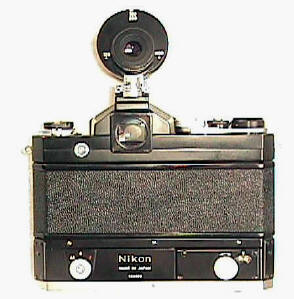 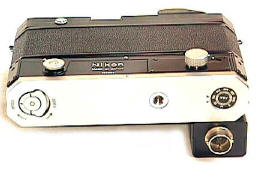 Discounting the front handle grip, the 7 fps motor itself is strangely the same size as the standard F36 drive.    It makes me wonder how fast a standard F36 motor will go with 16 AA's and a pellicle mirror. OK, so you would burn out a few motors, so what?  Replacing them is a LOT cheaper than  a High Speed. 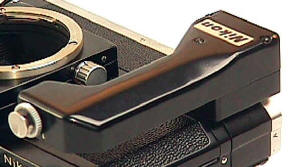 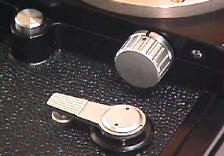 The extra large mirror lock up knob was an improvement on the small mirror lockup button of the standard F.    Unfortunately, the mirror lock up procedure was not as simple to operate as you might think.    The instructions state:

"Locking up the Mirror

The mirror must be locked up before using the motor drive at 7 frames per second.   Otherwise the film will not be correctly exposed.  After the film has been advanced, lock up the mirror by turning the mirror lock-up knob counterclockwise so that the black dot on the knob lines up with the red mark on the camera body.  Be sure to advance the film first or the mirror will be positioned incorrectly and may not lock in place, resulting in ruined pictures for the first two or three frames (the reset of the pictures will be normal.)  If you fail to lock up the mirror correctly, release the shutter once and turn the mirror lock-up knob clockwise to return the mirror to its normal position.  Then cock the shutter and turn the knob counterclockwise again to lock the mirror.

The speed selector switch is marked 3.5, Single, and 7 fps.     7 fps is only possible with a shutter speed of 1/250th and higher, 3.5 fps only possible with 1/125th and faster.    The frame resetting dial is much larger and easier to grasp than the standard F36 drive. .  The edges of the motor are reinforced with braces on each end of the motor, as are the later F36 drives. 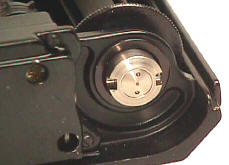 The motor connection was the same as the standard F/36 pack.   This meant a standard F36 pack or standard camera back could be fitted to the F High Speed.   Nikon film cartridges were recommended over standard film cartridges, since the friction of the felt trap on standard cartridges could leave static electricity marks on the film looking much like blurred dots or lighting patterns. 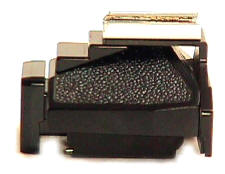 The accessory shoe (not a hot shoe) was mounted to the prism by folding a metal lip over from the front an on top of the prism.   This front plate with the Nikon name was similar to the F2, unlike standard F practice to mount the nameplate on the body itself. 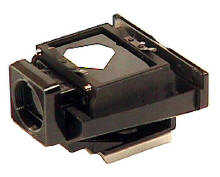 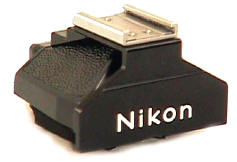 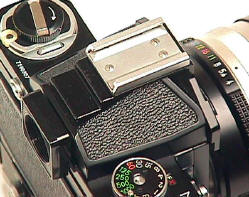 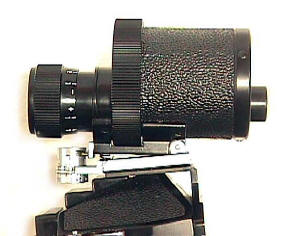 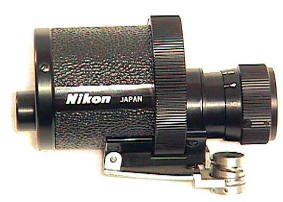 The zoom 135-300 viewfinder was the only one  built for a Nikon SLR.   The  zoom finder is quite well done, with a clear large image.  It shows about 80% of the film image, to allow for parallax mistakes.  Its 135-300 range is the longest range of any Nikon zoom finder.   Rotating the rear dial selected the zoom range.  Rotating the eyepiece   could adjust the built in diopters.  Parallax was adjusted just below the eyepiece by moving a lever to the focused distance -- hardly a convenient or accurate procedure for an SLR!! 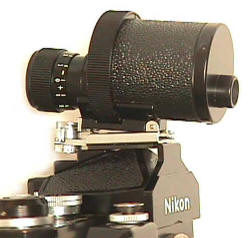 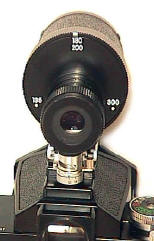 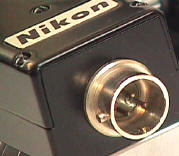 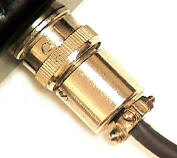 Designed for a separate belt or shoulder mounted battery pack, the connections were quite large and strong.  Woe to the photog who lost the special connecting cord! 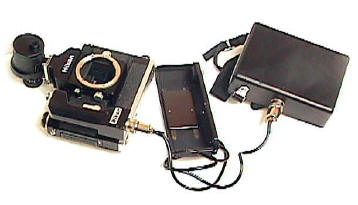 With the benefit of 20/20 hindsight, it becomes obvious that Canon's faster 9 fps F1 High Speed for the 1972 Olympic smoked Nikon's non-SLR mirror lock up 7 fps F High Speed.    Nikon corrected the problem for the 1976 Olympics, using a pellicle mirror in their  9 fps Nikon F High Speed.

Even so,  Nikon's pellicle mirror experience remains far less than Canon's.  As this is written in 1999, Canon still offers a standard production EOS 1n RS High Speed camera with pellicle mirror at 10 fps.

Nikon does not match the 10 fps with the F5, instead surpassing Canon with the limited production 1996 13.5 fps F3 High Speed.   For most shooting situations the standard F5  beats the EOS High Speed because the F5 has AF tracking at 8 fps while the EOS 1n RS AF tracking limit is only 5 fps.