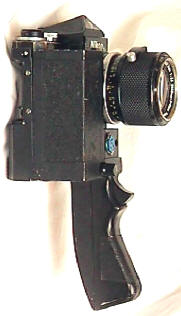 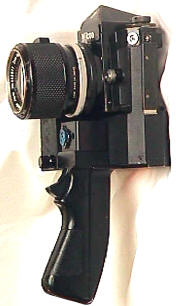 These are strange, unique cameras, unlike anything else that Nikon made. But then, Nikon didn't really make them...at least not completely!

While not well known, the KS-80A Navy F is mentioned in the Nikon Manuals by Cooper & Abbot, as well as the German Braczko Nikon books. What is not well documented is the many variations. 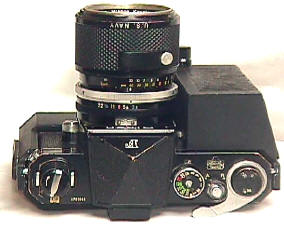 In 1964, after a presentation to several hundred assembled US Navy bigwigs at Coronado, California (near San Diego), the US Navy awarded EPOI (Ehrenreich Photo-Optical Industries) of California a contract to manufacture specially modified Nikon F cameras for Navy carrier pilots. While originally designed for "scramble" pilots intercepting unknown "bogies," the Navy used these for anything that seemed to fit the bill. Unfortunately for EPOI, they seriously underbid the contract and lost money on every KS-80A or 81A sold!

The goal was to produce a motorized Nikon F capable of easy one handed operation. Today, such a demand would be very simple. But in the middle 60's, it was not an easy chore. Nikon's standard motordrive battery pack at the time was designed to be worn on the belt with a two foot connecting cord in between! The later "cordless" battery packs had not yet been invented. Remember that automatic exposure, much less auto focus, were not yet invented!!

Starting with a standard black Nikon F, a standard F motor, and a standard 43-86 zoom lens, EPOI made major modifications to create their Navy Nikons. The standard focusing screen was the cross hatched type "E." The standard finder was the non-metered prism. In service, the prism were sometimes substituted for the metered Photomic TN or later FTN finders.

EPOI created a steel casing to encase the Nikon F body and motor drive. The F body sat down inside a steel cradle and was held in place by set screws. This allowed the body to be removed for repairs. The motor sat directly beneath the body, encased by steel on three sides. Only the back of the motor remained exposed for access to the controls.

The traditional removable Nikon F back/baseplate assembly was not deemed suitable for an aircraft cockpit. Instead, these US Navy F's had the ONLY hinged back loading ever made for the F. Opening on the left side, the back pivoted on a heavy metal lip and was also easily removable while still keeping the motor and the camera body inside the KS-80A steel frame.

The motor sat down into a steel enclosure, beneath which was the permanently attached pistol grip and with trigger 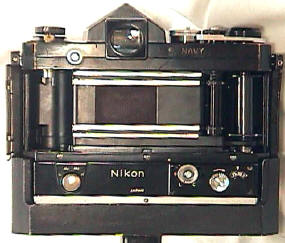 release for combat operations. The trigger allowed single shots, or continuous shooting at 4 fps. The 8 sub AA welded battery Nicad batteries sat in a square battery compartment in front of the self timer. If you look at page 4-10 of the excellent Peter Braczko Nikon Pocket Book, you will notice that the KS-80A pictured does not have its battery pack, or its charging block, for that matter. Both the battery box and charging block are so rare that even an expert like Braczko was unable to provide a picture!

I talked to a former employee of EPOI, who told me that EPOI originally underbid the contract, and lost money on every KS-80A delivered. Estimated production by a retired Nikon sales representative is 300-400 units. My original estimate of 2,000 units, which was plagiarized and somehow got published in McKeown's Price Guide without my permission, is not accurate.

To fulfill the contract, EPOI modified OFF THE SHELF cameras, lenses, and motors to produce the KS-80A and 81A. A single subcontractor assembled these cameras in northern California. This accounts for the non-consecutive serial numbers and many minor variations of these cameras.

I talked with a Vietnam War Navy camera repairman who served on a Navy carrier. He said the cameras were used for Russian Sub reconnaissance, oncoming MIGS, and whatever else the pilots thought interesting. They were used aboard the A3D bomber (nicknamed the All Three Dead Bomber), the A4 and A7 Intruder interceptors, and the FH1 Sea King helicopter, among others.

The most interesting thing about his wartime experience is how they dealt with serious camera repairs. Minor problems with the cameras or motors were fixed on board the carrier. Major repair problem had to be shipped back to the States, resulting in a wait of several months to get them back. To avoid the long repair time, it was common practice for repairmen to throw cameras/motors in need of major repair OVER THE SIDE into the ocean! The new replacements for the "lost" camera would be on board the carrier the next week. Who knows how many KS-80A's are on the bottom of the Sea of Japan!!

B/W Tri-X was the usual film of choice. I have some camera backs with the Tri-X markings and the daylight exposure of 1/500 at f/16! After all, the pilots were not Eugene Cook. 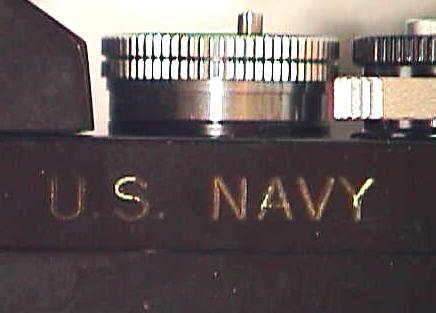 There are two types of rewinds found on the black Navy F's. Some cameras have a large rewind knob 14 mm in diameter and 18 mm high, designed for gloved pilots. Interestingly, the knob will RAISE vertically about 6 mm for easier access. Too bad Nikon did not do this for the standard F rewind lever. Other cameras have the standard F rewind lever. In my experience, lever rewind Navy F's outnumber the knob rewind Navy F's about 4-1.

Both versions have the same engravings, which is "U.S. NAVY" in block style letters, 4 mm high letters in an inscription 26 mm long. ALL Navy KS-80A and 81A F's are black motorized bodies.

Keep in mind that the motordrive units were HAND MADE by a single individual. There are three major variations, with many minor variations. This leads me to believe they were probably ordered in three lots, at separate times.

1) KS-80A Smooth Black Paint Finish with Contract ID Tag on Camera back AND motor drive (With & Without US Navy in Pistol Grip casting above Trigger).

These early KS-80A motors also have a smaller ID tag showing the same information as the camera backs, measuring 20 mm by 47mm.

I believe Type 1 was made initially, then Type 2 with cost savings by deleting the ID tags, and then Type 3 with a more rugged black crinkled paint and no ID tags.

PLEASE NOTE: It is not unusual to find mixtures of these three versions, i.e. a Type 1 with a plain back, or even a Type 3 with a ID tag back. The Navy did not view these as collectibles, and all parts were mixed and matched as needed to get the job done.

Unfortunately the Navy missed the big picture. They failed to keep their cameras well documented and in mint condition for their most important job: gladdening the hearts of camera collectors.

The KS-81A is easily identified because it is so labeled on the ID tag at the rear of the motor. Note that you will not find this information in any standard Nikon reference book. So far as I know, this is information is published here for the first time. I have been told that this was designed for submarine periscopes. While mated with any of the US Navy F's, this motor makes it a KS-81A.

The KS-81A is very similar to the KS-80A, except that it has a different power connection. The 81A has a sort of twin sliding rail arrangement on the left side of the camera, 38 mm wide by 69 mm long, which provides the connection for charging. Apparently this was developed with some sort of charging station which has not yet surfaced. .

In my experience, the KS-80A outnumbers the KS-81A about 20-1. Occasionally I have encountered 250 exposure backs hand engraved "US SUB PAC" for submarine use. I've seen reports that only 10 such outfits were made, but I have not seen any documentation to support that claim.

Originally the KS-80A/81A was powered by eight "sub AA" Nicads, welded together and sealed inside of a plastic case to provide 12 volts. Because these batteries are almost always missing, the motors are virtually never in operating condition. I have only seen one such original battery pack, and it was long past its original life. Note that the KS-80A and 81A motors have special electronics within their pistol grips. I suppose an electronic wizard could repair them, but the average camera repairman probably can't. 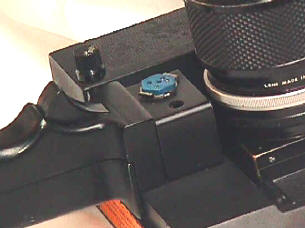 ALL of these six variations originally came with a Charging Block for charging the nicads. This was a one piece folded black metal box which was open on the top and bottom, size 31mm by 41mm. On its front is a five contact post to an electrical charger of some type. I have never seen the charger apparatus for this unit, even though I have seen a lot of KS-80A motors. The charging block, for some unknown reason, is almost ALWAYS  removed from the motor. Strangely enough, it is extremely rare, rarer than any other component of the KS-80A camera.   Almost as hard to find is the plastic fuse cover for the battery chamber, which is usually broken off and lost. 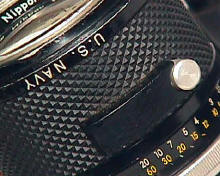 The standard lens was a 43-86 zoom with a US Navy engraving and an infinity lock. Since the aircraft or ships encountered would be some distance away, the infinity lock made perfect sense--kind of an Auto-Focus system of its time! I have seen four such lenses. I have had one case reported of the 28/3.5, 50/1.4, and 105/2.5 so modified and engraved.

All of these components are rare, but complete units with the proper lens, body, motor drive, charging unit and battery pack, are verrrrry verrrrrrrry hard to find. In 1995, a complete KS-80A camera with motor and 43-86 zoom was advertised and sold by Brooklyn Camera Exchange in Shutterbug for $6,000 US.

Strangely enough, KS-80A and 81A's rarely show up COMPLETE.  Their components were scattered far and wide by the Navy's disposal methods. Trying to assemble all the necessary parts for a complete unit is a challenging quest.