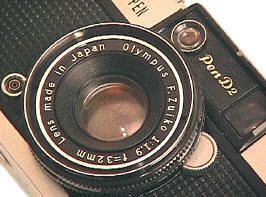 Half Frame 35's are often pretty much forgotten today, but they sold in the millions during 60's to mid 70's.   Half frames use regular 35mm film, but get twice as many pictures per roll because the film format is 1/2 the standard size. For all practical purposes half frame cameras were re-invented by Olympus  with the 1959 Olympus Pen.  Many more models followed over the course of over 2,000,000 Olympus Pen cameras -- and this not counting the Olympus Pen F/FT SLRs.    Most Pens were rather simple cameras.  My favorite Pens are the black wide angle Pen W with a 25/2.8 and the fast lensed  D series.  The Pen D with selenium meter and 32/1.9 lens debuted in 1962.   The D2 with CDS meter arrived in 1964, with the same 32/1.9 lens.   The D series closed out with the D3 in 1965, with a 32/1.7 lens.     All four  are hard to find today, and excellent shooters.   Some prefer the simpler Pens, because they will easily fit into a shirt pocket. 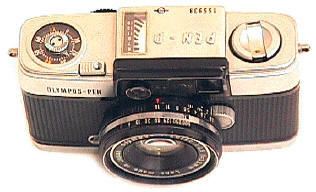 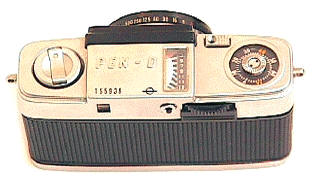 The D2  has an elegant simple layout with easy to use larger than average controls.   Hmm --  seems the designer wanted to escape the small camera with small controls concept.  Film advance is by the wheel on the back of the top plate.  .  Shutter speed range 1/8 to 1/500th plus B.  F/stops 1.9 to 16.   The rewind lever and rewind button are both large and easy to use.  The scale focusing lever is also large and easy to use.  While some may wish for rangefinder focusing, it is not really needed with a 32mm lens.     Close focus distance is .8 meter.   The PC connection is on the right front of the camera, offering electronic flash sync at all shutter speeds with the D2's Copal leaf shutter.   Weight of the D2 is just over 15 oz, thanks to its all metal construction.  It measures 2 5/8" tall, 4 1/4' long, 1 5/16" wide for the body, and 2" wide including the lens.  The sharp 6 element lens has a 43mm filter size. 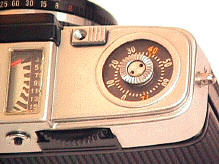 The very large and easy to see film counter  counts backwards, showing how many shots left.   Push the button on the back of the top plate, read the LVS scale, and transfer the reading to the lens in the little moving window between the aperture ring and the shutter speed ring.   The D series are manual cameras, no AE here.  Meter ASA range 10 to 400.   The shutter release is threaded for cable release.   The back removes with a 180 turn of the bottom latch.  The tripod socket is centered in the baseplate.  A nice feature are four small little pegs on the baseplate, to help protect it from scrapes. 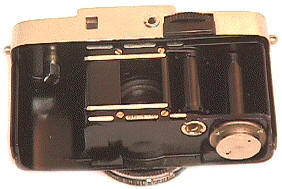 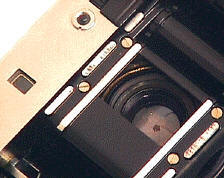 Notice the vertical film gate.  Hold most half frame cameras   horizontally, and you will get a vertical shot on the film.  Want a horizontal?  Hold the camera vertically!    The clear bright finder is edged with a brightline and parallax correction  marks.   The 625 Mercury battery is designed to fit in the compartment below the film advance spindle. 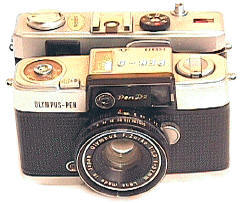 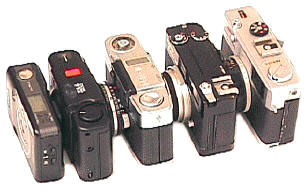 Olympus Pens are durable dependable cameras, capable of very nice results.  If you need more shots per roll and not too big enlargements, they deserve serious consideration.

What kind of quality can you expect?   In 5x7 and smaller prints, the difference between full and half frame 35 is often hard to see.    8x10's and larger will show a definite difference.   Using a half frame camera is that much easier if you are processing your own film.  Though the half frame made a bit of a comeback in the 1990s with the Yashica Samurai, most 1 hr processors are not set up for half frame processing. Olympus Pens have proved very popular at large amusement parks.   The "pro" photographer will ask to take your family's picture for free, but of course they hope you will come back later and buy,   buy,  buy.   Ironically the 18x24 we call half frame started out as a full frame 35mm movie camera format.