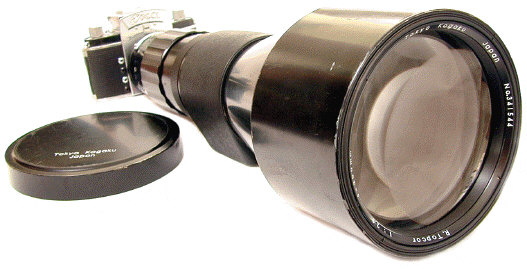 The huge 300/2.8 Topcor is an almost mythical lens, 35's FIRST 300/2.8.    "Topcon Story" by Marco Antonetto and Claudio Russo points out the 300/2.8 Topcor   was amazingly introduced in the dark ages of 35 SLR development, as one of the original Topcon R lenses in 1958.  It  was a truly  amazing optical achievement for the time, and still is.    Offhand I can't think of ANY OTHER early 35 SLR LENS from a camera manufacturer  which remained the best of its type for almost 20 years, without any contemporary competitors.   When introduced, the 300/2.8 Topcor was not only the fastest 300 at the time, it was also faster than ANY contemporary Nikon or Canon SLR lens!   OK, so I cheated just a little bit.   Nikon and Canon would  not introduce their 1st 35 SLRs until the following year.  Like all Topcon Topcor lenses for the Topcon Super Series, it was very sharp as well.  The huge lens cap could also double as a salad bowl, dog feeding dish, or flying saucer in home movies.

Marco Antonetto reports a known serial number range between 341001 to 341682, which I interpret as a probable production of  700-800 lenses. This lens is number 341544. When you consider this averages out to less than 50 per year for over 18 years,  you begin to appreciate this was a very rare lens even when new.    Apparently the 300/2.8 Topcor  was not exported to the US market until  1969.    Nikon and Canon finally made production 300/2.8's by the 1976 Olympics,  ironically about the same time Topcon ceased SLR production.    Topcon's 17 years of bragging rights for the fastest lens of its type is probably the only time any Japanese SLR maker bested the likes of Nikon and Canon for  so long.     Ironically many 300/2.8 Topcors found themselves converted to other mounts, especially Nikon  and 35mm movie mounts,  making it more difficult for the Topcon collector.

The mighty 300/2.8 Topcor measures almost 16" long and weighs in at a diminutive 7 1/2 pounds.    Fully extended, the built in double collapsible hood extends the already substantial length another 4 1/4"!     Close focus is just under 15 feet, which makes for tight head shots.    The f/stop range is 2.8 to 22.   The aperture  is   pre-set,  which means you pre-set the shooting aperture you want,  and then open and close the aperture with another ring.  In other words, the camera body is not opening and closing  the aperture for you.   In true Zen tradition, you become one with your camera, opening the aperture up to focus on  a bright screen,  and then stopping the lens down to shooting aperture.   The bottom of the lens has a strong non-rotating tripod mount. 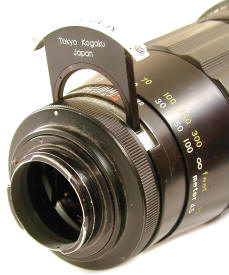 The rear mount rotates, allowing easy verticals or horizontals. Thankfully this behemoth does not take filters over its 124mm front element, but instead has a 39mm filter drawer.     If the mount looks familiar to Exakta fans, that's because Topcon adapted the Exakta mount to the first Topcon SLR, the Topcon R.  At the time it looked like smart marketing, since Exakta was then the most popular 35 SLR with the largest user base.   Exaktas passed out of favor however, and Exakta compatibility didn't help Topcon in the long run. While the mounts themselves are essentially the same,  Exakta and Topcon have different auto diaphragm mechanisms.   The pics above show the 300/2.8 mounted on an early black ring Exa and that   overwhelming pro favorite, the redoubtable Exakta RTL 1000.   Yeah, I know about the vignetting on the Exa, I just liked the look. 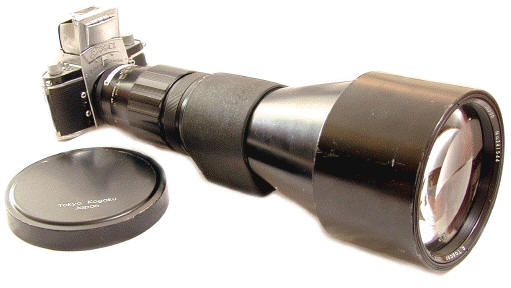