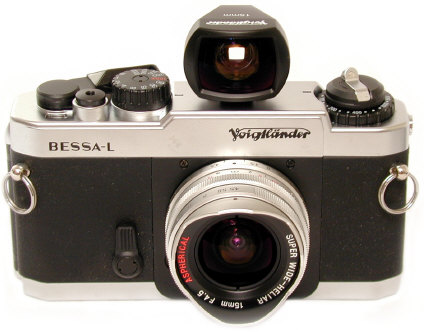 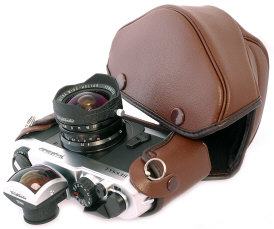 The L has a simple, easy and convenient classic control layout. 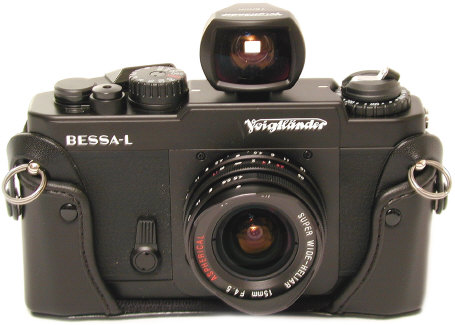 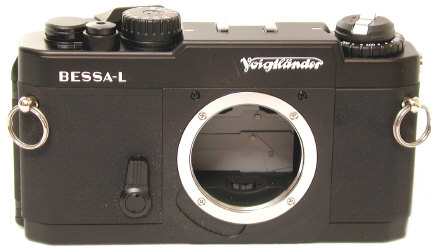 the top half of the case is removable, allowing for easy carrying while still protecting your camera, the case straps snap OVER the camera lugs

The Bessa L is a scale focus Leica Screw mount camera with TTL metering,  best suited for 35mm and wider lenses.  It is ideal for the Voigtlander 12/5.6, 15/4.5, 21/4, 25/4, 28/3.5, and 35/2.5 lenses.  Scale focusing means you turn the distance scale on the lens barrel to match the distance of your subject.    IF scale focusing is a new idea for you, it's actually fast and easy to get excellent results when shooting wides.  Rollei sold over a million Rollei 35 cameras with scale focus 40/2.8 lenses.  A viewfinder is not included with the camera.   Cosina includes a viewfinder with the Voigtlander 12, 15, 21, and 25 lenses.  For 28 and longer lenses, the viewfinder must be purchased separately. 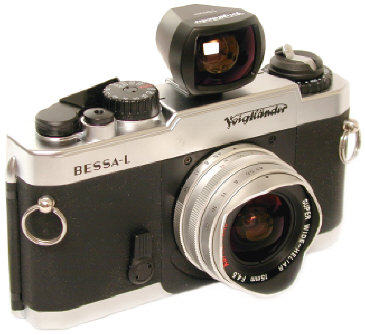 The Bessa L was also initially produced for some markets as the "Cosina SW-107."   The 107 was made in fewer numbers and discontinued as the Voigtlander version gained popularity world wide.  By December 1999,   the 35/1.7, 50/1.5 and 75/2.5 were added    Voigtlander introduced the Bessa R, a Bessa L with built in Rangefinder / Viewfinder in January 2000.  March 2001 saw the introduction of the Bessa T, Cosina's first Leica M mount camera.   The Bessa R2, an updated Bessa R with metal body and Leica M mount,  followed in February 2002.   Outdone by its progeny, the Bessa L was officially discontinued 5/31/2003. 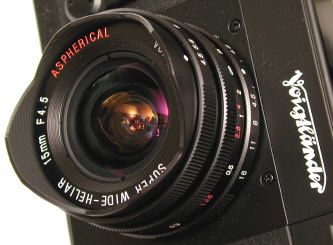 The Bessa L is a SCALE FOCUS CAMERA (not a rangefinder camera) -- it has NO built in viewfinder or rangefinder.  The L is reminiscent of the classic finderless 1950's Screw mount Leicas,  like the Ig.   Super wides really don't need rangefinder focusing since their ample depth of field works great with old fashioned guestimate scale focusing.   More importantly, it offers TTL metering.  Bodies and lenses are available in black or chrome.    With its small size, clean lines, and lack of a rangefinder, a fairly good argument can be made that the Bessa L amounts to an  updated 1925 Leica A, or a modern TTL version of the Leica C, the camera which introduced the famous Leica Screw Mount. 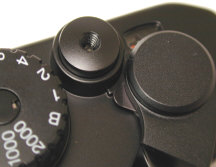 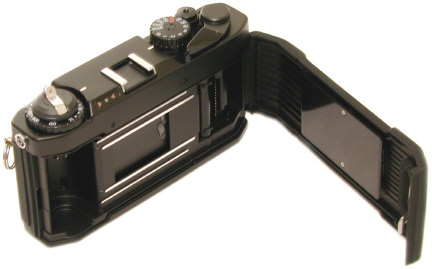 While some love this feature, others did not.   The shutter lock was not continued in later Bessas.

The Bessa L has very easy film loading, with unfortunately no provision for databack or motordrive or multiple exposures.  The back door film window is a first on a production LTM camera. 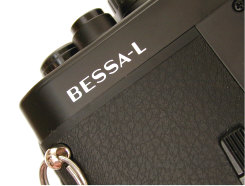 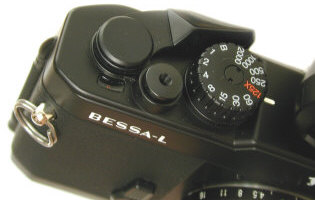 The front body covering has  an exceptionally well done vulcanite like appearance which looks much more expensive than it is.  The back door also has a rubberized surface for easy gripping.  Shutter release is large and smooth. The case goes around the strap lugs to prevent scarring of the camera body.  A pin from the advance lever locks the shutter release when the advance lever is pressed in neutral position -- a very nice and simple solution to inadvertently releasing the shutter accidentally.  Pushing down the shutter release half way activates the metering display. 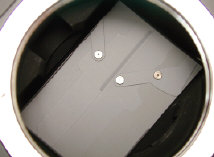 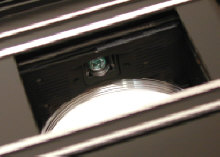 The gray finish on the outer Copal shutter blades  provide the reflectance for the centerweighted silicon metering cell, facing backwards from the bottom of the camera.

While this graph was calculated for the Bessa R, the Bessa L apparently has the same meter.  The only info I have seen from Cosina on the Bessa L's metering pattern describes it as "centerweighted."  Dutch fiber optic engineer Frans de Gruijter decided to test out his Bessa R metering pattern.  The result is the pattern shown to the left, copyright Frans de Gruijter 2003, all rights reserved.    I find it interesting the meter weights the entire center of the picture from top to bottom, with emphasis on the lower portion (since statistically most pics are horizontal and too much sky will throw off your meter reading).    This info can be important in some metering situations.  Many Thanks Frans! 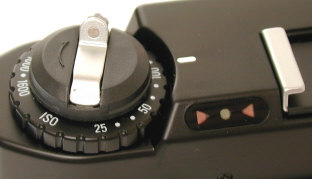 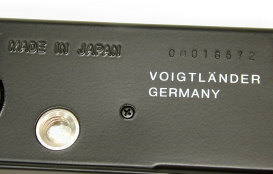 With no built in finder, the LED readout is on the back edge of the camera.   This makes it VERY easy to set your exposure while holding your camera at waist level, and then quickly raise it  to eye level to shoot.    With the 15's  immense coverage and depth of field,   you can easily shoot it grab style from the waist or even held over your head without using the finder.   Note the engraving "Voigtlander GERMANY  -- MADE IN JAPAN."  The story I have is that the "Voigtlander Germany" marking was a requirement of the present German Voigtlander trademark owner.

Which Lenses? The L was designed to be used with 35 and wider lenses.  Nevertheless,  the L can be used with virtually any Leica screw mount lens, you just have to be very careful  the distance on the lens focus scale matches the distance of your subject.

FLASH:  The Voigtlander Bessa L (and Bessa T) are a bit of a problem with flash, since the finder occupies the same accessory shoe that would normally hold the flash.  I think the best flash solution are professional "potato masher" handle flash units with a built in flash sensor.   For the Bessa L or Bessa T, most photogs mount their flash on a side flash bracket.  Unfortunately, the bulk of the small flash with a flash bracket is about the same as the larger, more powerful potato masher flashes.   To me, it just makes more sense to use the larger flashes with the Bessa L and Bessa T, since you are going to be stuck with the extra weight and bulk of a flash bracket anyway, and get the extra power of the larger flash.  My personal favorite "potato masher" flashes with self contained battery packs and a built in sensor include the Ascor 1600, Rollei 36RE, the various Metz 45 series, and the Sunpak 522 or 544. 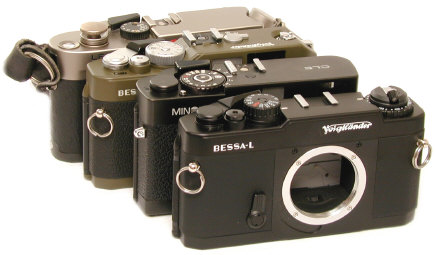 For all practical purposes the Bessa L is the about the same length and thickness as the Leica M6, except 4mm lower measured at the top plate.  Amazingly, the L body only weighs a little under 12 oz!  Back to front: Leica M6, Bessa R2, Minolta CLE, Bessa L.

How does it all work? Very well indeed   I am very happy with the overall design, construction,  and convenient handling.   The camera and lenses look like a real winner to me -- a bargain offering a lot for the money.   Not only that, it's fun to shoot the Bessa L as a point and shoot.  In use the 12, 15, 21. and 25's immense depth of field is kind of a liberating experience.  After being programmed to constantly focus with all the other cameras I have shot with,  the scale focus system vies with AF for ease of use.   Over time the biggest problem has proven to be shutter jams.  However they are usually caused by the photogs themselves, by getting in a hurry and trying to advance the film before the shutter has closed from the previous exposure.

The Who Would Have Believed It?   Department

Strangely enough, the Bessa L cases will just barely accommodate the Leica M6, at a fraction of the cost of a new M6 case !!!   It is a tight fit, and the slightly larger M6 buckles the case a bit, but some shooters may find that easy to tolerate considering  the ample difference in case prices.

The seminal Voigtlander Bessa L aka Cosina 107 was officially discontinued 5/30/2003 and has long been sold out at the factory.   This was a very popular camera due to its low close out prices.   Real world however, the Bessa T is still available and far more camera for the money, with the same shutter but with a long base rangefinder AND the more versatile Leica M mount.  INFO & PICS

The initial US demand in early 1999 for the new Voigtlander line sold Bessa L bodies for $350 soon after introduction.   After a few months $250 became the regular retail price.   But that was nothing compared to the pent up demand for an affordable Leica mount 15mm lens.  The 15/4.5 was initially selling for $750 in the US before THK became the 1st official importer   At the March 1999 San Jose camera show I was astonished to see a new 15/4.5 sell for $750 to one dealer, who then resold it for $1500 less than a half an hour later! 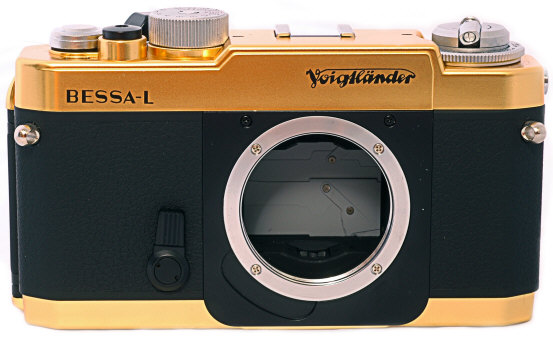 Three Gold Voigtlander Bessa L's were produced for Cosina trade show displays. Cosina's CEO Mr. Kobayashi was kind enough to give me this one when I visited the Cosina factory in 2004.

I am a great fan of the Bessa L and SW 107. I got my first one within a month of it being introduced and I am still using it (I also have complemented the package with a chrome and a black SW 107). It is a "snap-shooters" dream camera. Stick a 12,15 or 25 on it and shoot away. It is light and with a superb meter built in. It's value is low enough that you are not going to be worried about taking it into "hazardous" situations and it does not look intimidating to the subjects. When I travel, one of the L's is my back-up body (with the 25/4 on it) and it will slip into a pocket of a camera-vest without having you list heavily to that side. I have used it frequently with an old Leica Summaron 35/3,5 as a "guesstifocus" camera and even with a 50 Summar for a combination of "slightly out of focus" and softly rendered shots. It is also noticeably easier to load than a screw mount Leica!

Only thing to watch out for while using Bessa L's and 107's is that if you are shooting at a very slow shutter speed and you depress the shutter while still advancing, you can jam the shutter. Usually some fiddling with the advance lever or turning the shutter speed dial to B and advancing clears it up. Worst comes to worst, you rewind the film and take it out and then wiggle the sprocket drive in the camera. It does not happen often, but it is good to remember.

Well, it might have had a short production run in time, but not in volume. There are thousands of Bessa L's and 107's out there doing what it was designed for, taking pictures and that it is what a camera should be used for. Now, the other question is, how come my Bessa L from early 1999 has gone through only 1 set of batteries in 4 years while some of my M's are enhancing the stock values of battery manufacturers?

If you haven't got yourself a Bessa L or SW 107 yet, get one. There is still stock out there and stick a wide angle lens on it and shoot, guess focus, frame sloppily and have fun. It only proves that photography is not that damned serious and this camera put the "shooting for the hell of it" back into the picture taking business.

The Bessa L is gone, long live the Bessa T.

Tom is a long time Leica shooter and professional photojournalist. He is the inventor and manufacturer of various Leica accessories, including the Rapidwinder, SoftRelease, and MiniSoftRelease.   You can find his products at www.Rapidwinder.com .

Revised: September 11, 2017 .  Copyright © 1998-2014  Stephen Gandy. All rights reserved.    This means you may NOT copy and re-use the text or the pictures in ANY other internet or printed publication of ANY kind.  Information in this document is subject to change without notice.  Other products and companies referred to herein are trademarks or registered trademarks of their respective companies or mark holders.