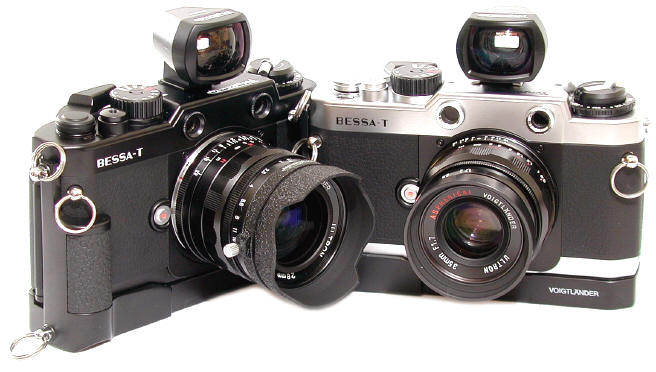 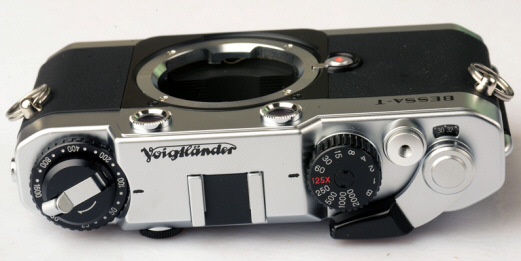 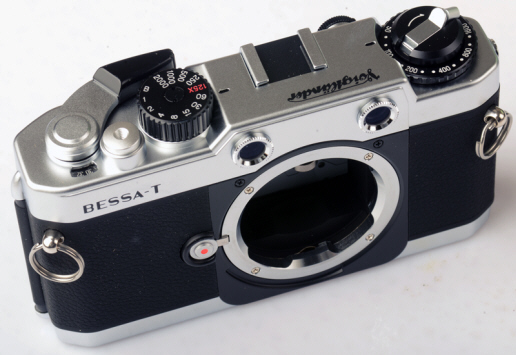 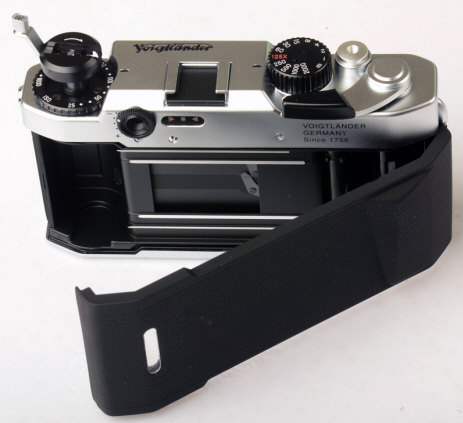 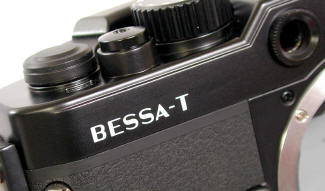 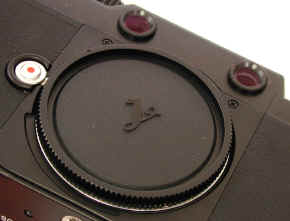 In March 2001 Cosina Voigtlander upset the rangefinder apple cart by introducing a VERY different sort of Leica M mount rangefinder.    The T is so different many photogs take a look at the specs and are sure they won't like it ... until they see it for themselves.    The Bessa T is Voigtlander's 1st M bayonet camera.   Yes, the T mounts Leica  M lenses, joining an elite group of Leica M's and the Konica Hexar RF with this legendary mount.    The Bessa T is the least expensive M mount camera ever made, as well as one the most unusual M mount cameras.     The Bessa T makes for an ideal low cost 2nd M body,  or a  low cost entry into the not so inexpensive Leica M system.  See that thing mounted to the bottom of the camera ?   That's a trigger winder --  a bottom mounted trigger wind advance for quick shooting.   With practice, a trigger winder is faster than the regular lever advance at about 2-3 fps(frames per second).    The Bessa T was discontinued 5/1/2004.

If you are new to rangefinders, don't be confused with the T mounting screw mount Voigtlander lenses.   A standard adapter allows screw mount lenses to be used on the M bayonet mount --- easily and perfectly with full rangefinder coupling.  If you are used to the venerable Leica M body cap, seeing a M cap with a "V" on it takes a bit of getting used to. 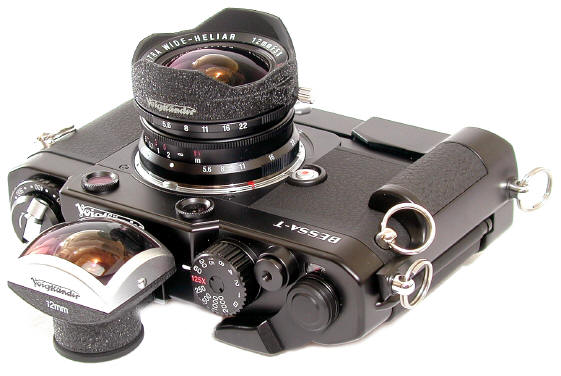 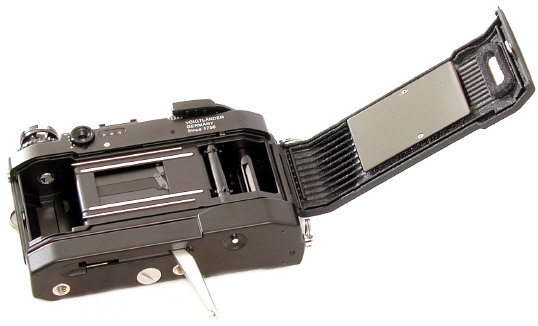 The T mounting the world's widest production rectilinear   lens,  the Voigtlander 12/5.6, and a trigger winder.

The Voigtlander Bessa T's design  is unique amongst today's rangefinder cameras.  The 1.5x rangefinder is built into the body while all view finders are interchanged separately.    In other words,  the body has no built in view finder.    Strange huh ?   Well, only until you get used to it.   This system does offer some advantages.    Separate viewfinders usually offer a better view of a particular frameline than combination frames built into camera bodies.

Notice the extra strap lugs on the trigger winder which allow   the camera to be hung vertically -- like the old Leica M5 or CL.    Personally, vertical carrying of the cameras was always a favorite of mine, but you will find more people who prefer horizontal.   No right answer here, just choose the method you prefer. 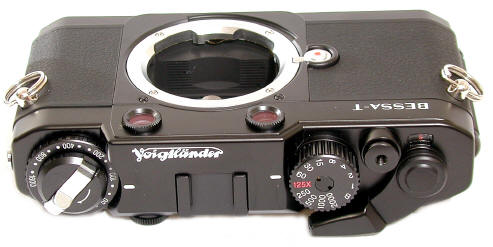 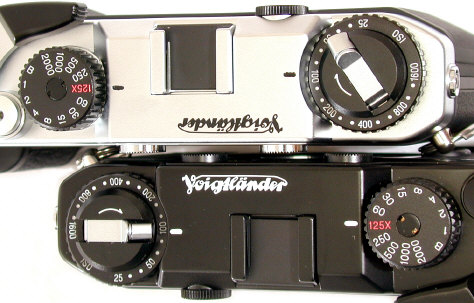 The top plate layout is simple and effective.   The silver Bessa T's are all of the handsome "Panda" variety   with a mixture of silver and black fittings.  Panda you ask ?  When Leica ran out of chrome M6 fittings for the chrome M6 a few years back, they started shipping them with black dials and advances.  These became known as the "Panda" M6 in the US, in part due to much real Panda press coverage at the time.     Some  Leica collectors are foolish enough to pay extra for them, to the amusement and delight of saner Leica shooters.  While I sell silver Bessa T's at the normal rate, I will bow to market demand and sell "Panda" Bessa T's at only a 50% premium with a special Arizona Desert ocean front real estate package.   Did you notice there are NO flash contacts in the T's accessory shoe?  That's because the only flash connection is via the side mounted PC connection. 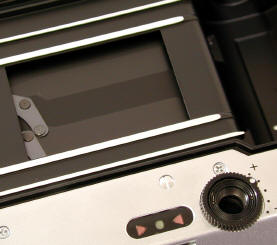 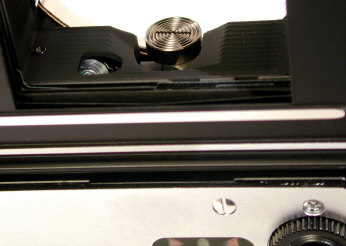 The Bessa T's meter readout is on the back edge of the top plate, near the adjustable diopter rangefinder eyepiece.  This is a better location than in the rangefinder, where a LED readout would be very distracting.  The silicon metering cell is in the top of the film chamber, angled downward towards the gray outer shutter.

FLASH:  The Voigtlander Bessa T (and Bessa L) are a bit of a problem with flash, since the finder occupies the same accessory shoe that would normally hold the flash.  I think the best flash solution are professional "potato masher" handle flash units with a built in flash sensor.   For the Bessa T or Bessa L, most photogs mount their flash on a side flash bracket.  Unfortunately, the bulk of the small flash with a flash bracket is about the same as the larger, more powerful potato masher flashes.   To me, it just makes more sense to use the larger flashes with the Bessa T and Bessa L, since you are going to be stuck with the extra weight and bulk of a flash bracket anyway, and get the extra power of the larger flash.  My personal favorite "potato masher" flashes with self contained battery packs and a built in sensor include the Ascor 1600, Rollei 36RE, the various Metz 45 series, and the Sunpak 522 or 544. 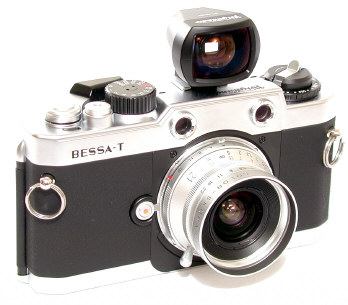 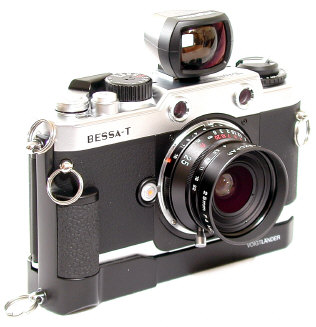 Improvements over the Bessa R:

Differences between the Bessa T and Bessa R 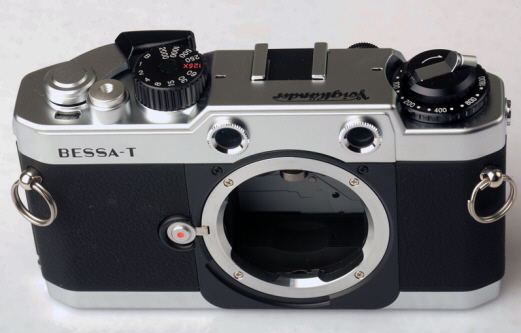 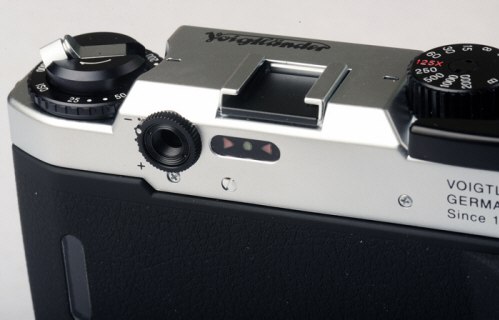 The trigger winder thankfully attaches WITHOUT having to remove any bottom plate covers, which almost always get lost.  Yes, the Rapidwinder body is metal.

So what do we have here? 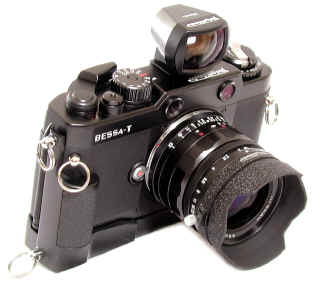 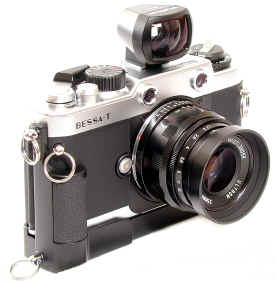 What does it mean ?

Voigtlander is alone in the entry level M camera market, with the lowest  cost M camera and lowest cost quality Leica compatible lens lineup -- a market Leica has ignored since it discontinued the Leica CL a quarter of a century ago.    With incredible creativity and an amazing ability to turn out new lenses and cameras quickly, a new star is rising in the rangefinder world.

What the Bessa T isn't

If you were hoping for a new advanced M camera to go head to head with the M6, this isn't it,  nor was it designed to be.   Instead the Bessa T aims to open up an entire new territory to the M photographer, the LOW COST ENTRY M MARKET, succeeding admirably. 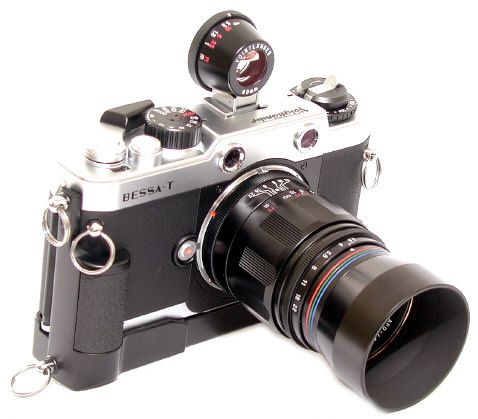 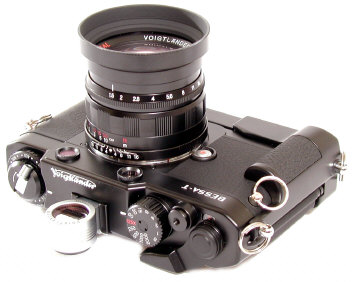 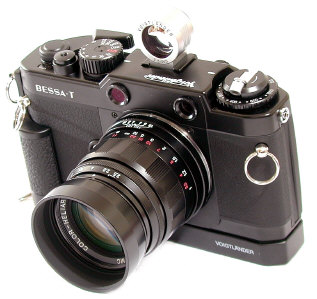 The Bessa T with trigger winder and mounting the Voigtlander 75/2.5 and 50/1.5 screw mount lenses via M adapters.

What Lenses DON'T fit to a T

Due primarily to the possibility of hitting the Bessa T's outer shutter, these lenses are NOT recommended:

The collapsible 50/2 Summicron fits fine on the T, and is able to collapse fully.   The collapsible 50/2.8 Elmar will collapse, but not fully --  so don't push it that extra 3/32" or so.  There are many collapsible lenses, and I have not tried all of them on the T,  so be careful when collapsing a lens least you  damage the shutter or meter.

The collapsible Voigtlander  50/2 Heliar, introduced at Photokina 2004, CAN be safely collapsed into ALL Cosina Voigtlander Bessas.

I would also be very careful mounting any wide angle with deeply set rear elements, such as the 20, 28, or 35mm Russian lenses in Leica screw mount. 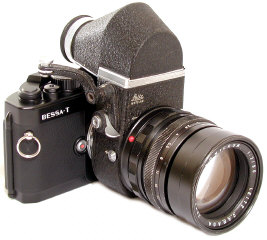 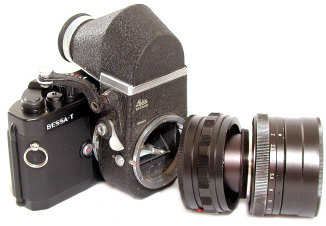 Surprisingly, the T will mount either the Visoflex II, IIa or III WITHOUT any modification of the release arm. All you have to do is use the Abrahamsson Soft Release to take up the difference in clearance between the arm and the Bessa T's shutter release.  What's a Visoflex ?  It's a Leica made reflex housing   that was designed to turn Leica M rangefinders into an SLR.  While extending the M's versatility, it is not as convenient as a regular SLR.  Viso 3's were only made in M mount.  If you have a Viso II or IIa in screw mount, just add the screw mount to bayonet mount adapter to mount it on the Bessa T. 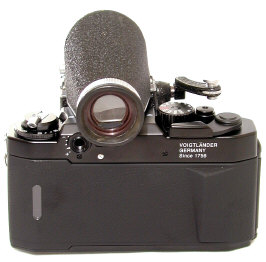 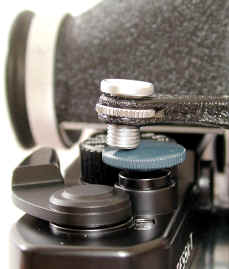 Hmm.  So who would buy a such a very different kind of retro rangefinder like the Bessa T? 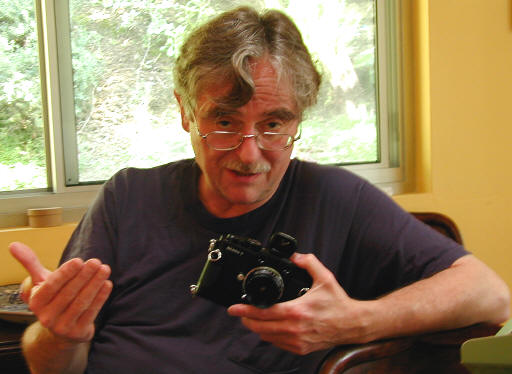 Revised: September 11, 2017 .  Copyright © 2001--2014  Stephen Gandy. All rights reserved.    This means you may NOT copy and re-use the text or the pictures in ANY other internet or printed publication of ANY kind.  Information in this document is subject to change without notice.  Other products and companies referred to herein are trademarks or registered trademarks of their respective companies or mark holders.