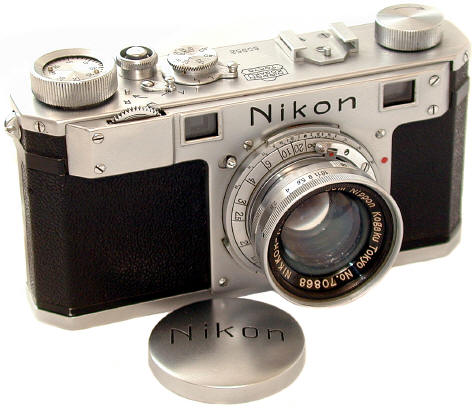 It was a beautiful California weekend day,  a nice day for a garage sale in a small California town.   Garage sales are an American tradition of having a local weekend sale from a garage, driveway, or lawn to get rid of unwanted items at low prices.   Some are advertised in local papers, many  just have a few hand made signs at local corners to advertise their existence.   Local camera bugs checked out the garage sale early , hoping to find something bargain priced, only to leave quickly when they saw nothing of interest.

Towards the end of the afternoon as the garage sale was ending, two retired ladies visited, asking if any watches were for sale.   They got excited when offered a Rolex watch for $100.   The "Rolex" turned out to be a Seiko.  Just about to leave, one of the ladies opened up an old beaten up wooden wine case which had been sitting underneath the tree on the front lawn all day, only  to  find inside five old cameras.  The owner wanted $100 for the lot because "one of the cameras is valuable."  The  ladies knew nothing about cameras, but they took the chance and bargained down to $75.   They left wondering if they had made a costly $75 mistake.

The next morning the ladies called a friend, their own camera expert.   They went thru the box, describing each camera as best they could over the phone.   Disappointedly, the first four cameras turned out to be junk.    They described the last camera's make and serial number, hoping they could get back at least part of their $75 investment.

He fell off his chair while having his morning coffee.  The ladies had bought a Nikon One for $15 ($75 for five cameras)!   It is one of the most sought after of all collectible cameras.     Number 60952, it is the 32nd production Nikon.     Click Here for More Pictures of this Camera

Nikon One stories end happily or sadly, depending upon which end of the Nikon One you end up on.  Not all Nikon One's are found at garage sales.    In 1974 I was just getting interested in collecting Nikons, and Bob Rotoloni's book had not yet been published.  Nikon rangefinder information at that time was hard to find, and often conflicting.    I visited a pawn shop in the old downtown section of Torrance California, a suburb of Los Angeles.   There was a strange looking old Nikon there that I did not recognize, other than knowing it was a rangefinder.  What grabbed my attention was that it looked NEW.   It absolutely sparkled.   The man behind the counter wanted  $100 for it.  I offered him $75, planning to put it on my recently acquired VISA card with a zero balance.  He held out for $100.   I decided to be cheap, and passed.  A few days later I changed my mind and went back,  but it had been sold.    I did not remember much about the camera, other than the knob film advance, a funny looking 50mm lens, and the letters MADE IN OCCUPIED JAPAN in very large letters on the baseplate.  Imagine my feelings a few years later, when I learned ONLY very early Nikon One's had MIOJ in large letters !!!    On the other hand, somewhere out there is a guy who likes to tell of the time he bought a like new Nikon One in a pawn shop for $100.......argh.......

Revised: September 12, 2017 .  Copyright © 2002  Stephen Gandy. All rights reserved.    This means you may NOT copy and re-use the text or the pictures in ANY other internet or printed publication of ANY kind.  Information in this document is subject to change without notice.  Other products and companies referred to herein are trademarks or registered trademarks of their respective companies or mark holders.