The 2nd Most Important 35 of All Time:  The Made in the USA Argus A

In MY always not so objective mind at least, the Argus A is undoubtedly the 2nd most important 35mm camera of all time-- second only to the Leica A.     If you think about  it,  that's a pretty   amazing legacy for a simple little Bakelite camera from a Michigan USA radio factory.  It really is.

How does Argus deserve this impressive ranking?   Easy,  they bribed me.   Unfortunately, not with money.  Argus paid me off in Photographic Heritage.    Building on the astounding sellout success of the Argus A,  Argus sold MILLIONS of Argi,  thereby establishing 35mm as the serious Amateur's film format of choice in the largest photography market in the world, America.  To put it another way, it's a safe bet that Argus sold more cameras in their first twenty years than Leica has sold in their first 70 years!!      Secured by the funny little plastic Argus A, 35's predominance lasts to this day.   As important as the first Leica was, the first Argus actually got more first time owners into 35mm photography! 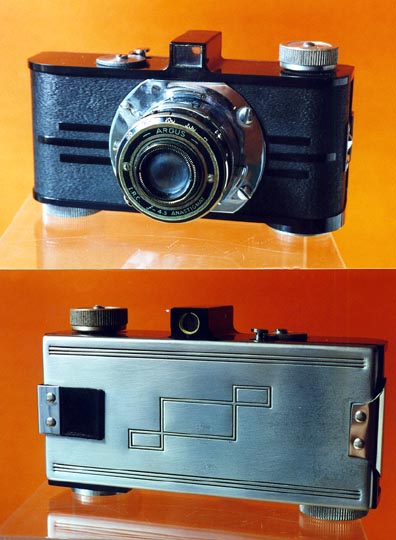 The great majority of Argus A's are black and chrome like this one.   Other colors were white, gold, olive, and gray.   Photo courtesy of Richard Seek / AR Photo

To put it another way, if you are a serious collector of 35mm cameras, your collection is seriously Historically amiss, if it's amissing Argus.   Arguses, eh Argi, eh Argus, found a market and made the most of it: the inexpensive relatively dependable relatively OK performing mass produced 35.   Translation: cheap yet good enough to get the job done.  These weren't throw away cameras, but the underlying concept lives on today,  in the ever popular   disposable wonder cameras.

There is some truth in the notion that the real secret of  Argus cameras was Argus radios, or to be more exact, what Argus management knew about mass merchandising from selling radios.    Often forgotten today, Argus radios were actually very successful because Argus owned THE patents for AC / DC radio  until they sold the rights to RCA --- because they were so sure of their future in cameras.   IRC (International Radio Corporation) knew the inexpensive end of  the American mass market like no other radio, eh camera manufacturer to that point in time --with the possible exception of Kodak which wasn't smart enough to get to the Argus market first.   The  IRC President returned from Europe in 1934 with the idea of to keeping his plastic mold department busy during off season by making an inexpensive 35mm camera .  Things were set in motion, and the Argus A was the result.

The first Argus camera was the rather plain and simple Argus A, a best seller which proved  far more successful than ever anticipated.   The most important selling point was the milestone introduction price of $12.50!!     The inexpensive 35 did NOT exist until the phenomenally successful Argus A invented it!!.    By modern standards it's a strange little camera,  but from 1936 eyes it was just the thing to get started in 35mm photography.    Early A's have no tripod socket, fixed pressure plate, and a single sprocket for frame counting.  Later A's have a tripod socket, dual film sprockets, and a spring pressure film plate.       The A's just right for its time features included: 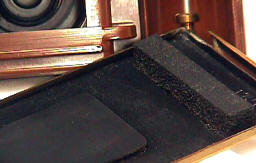 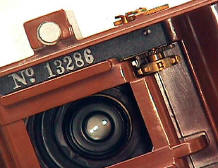 Probably to get around Leica patents, film traveled from right to left.   The rewind knob is on the top left, the advance knob on the bottom right.  Note the foam rubber block used to keep the film cartridge in place.  This early A has only one film frame sprocket for frame counting.

The Argus A "seemed like a good camera" in the eyes of the non-too-sophisticated American consumer, most of whom had never seen a 35mm camera before.   IF Argus didn't  invent and trademark the term "perceived value," they should have.   Argus certainly used perceived value to the max.  Better yet, the thing even took passably good pictures, dependably!

Hmm.  Who would have thought a very inexpensive plastic camera that actually took pictures would ever sell?  Maybe the Argus A was way ahead of its time.

Although the Argus A is usually not considered a Leica Copy, put the Leica A and the Argus A side by side and their similarities outweigh their differences.

While these similarities might be considered superficial, they weren't in the late 1930's when 35's were a new invention.      From a 1939 viewpoint, it was very obvious what camera the Argus A was modeled after.

That is all well and nice, but where   would the Argus A  be today without great timing?

Well, we will never know, since the Argus A is without doubt  THE   pinnacle  of great  camera introduction timing in the entire glorious history of 35mm Photography.  Seriously, I kid you not.  Really.   No, I didn't make it up.

You see, someone in Argus  heard about this new kind of magazine for 1936, a magazine that would make pictures come alive.  Of course it was new and no one had ever heard of it, but some genius in Argus decided to take a chance on the newbie magazine with a funny name, and take out  a full page ad  in the very first issue.    Not to worry, if it didn't work, Argus could always sell radios.    Of course it did work, and Argus cameras became a household word just like the magazine that carried the first Argus camera ads,  LIFE magazine.

The original A was made from 1936 to 1941.  It lived on in six  derivative models until 1951.  If you take the time to add up the production figures at the Argus Company site, you will learn that over 210,000 Argus A's were produced and that the A family numbered over HALF A MILLION.

Without the Argus A's success, there is no telling what 35 would be like today, or even if  we would still have 35!!

Strangely enough,  Argus is mostly overlooked by today's collectors.   They fail to  realize and appreciate the Argus A's overwhelming influence on 35's success.   The little Bakelite Argus A deserves better,  its rightful place in the Camera Collector's Hall of Fame.

For all practical purposes, the Argus A can easily be interpreted as a low cost mass produced Leica A.     However, I draw the line at those rumors about Oskar Barnack faking his death so he could move to the US and work for Argus.

What can kind of results can you expect from the A?? Click here.

Revised: January 31, 2016 .  Copyright © 1998-2002  Stephen Gandy. All rights reserved.    This means you may NOT copy and re-use the text or the pictures in ANY other internet or printed publication of ANY kind.  Information in this document is subject to change without notice.  Other products and companies referred to herein are trademarks or registered trademarks of their respective companies or mark holders.