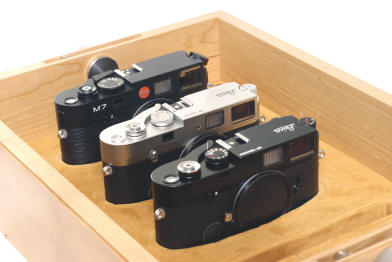 Why make this guide? Because the last thing you want from your new specially made Leica M is low resale value because you botched the design.  The a la carte option marks an important turning point for the rich masses, the ability to fine tune your own custom M without having pull at the factory.  It's a neat idea introduced at Photokina 2004.   Alas, not that many Leica owners stepped up to the plate to place a la carte orders due to the substantial a la carte pricing.   The M a la carte program was discontinued in 2018, though from time to time there are rumors of its renewal in one form or another.   The sad thing to me is so comparatively few a la carte cameras were produced with both M4 style film rewinds and black paint finish.   Without a doubt far and away the absolute ULTIMATE a la carte M camera is John Botte's engraved Leica MP shown HERE.

Both are great cameras.  Surprisingly the more  traditional MP is outselling the more modern and more feature laden M7 about 60/40.  Buy one or the other, but think twice before you buy both.  Why? because their shutter speed dials rotate in opposite directions from high to slow speeds.  This translates to an easier chance of lost shots -- IF you take the M7 off auto and turn the shutter speed dial the wrong way with a quickly changing subject.   The logical shutter speed improvements of the M6 TTL and M7 did not live on in the later MP due to a crusty lemming like love of inconvenient traditions push back heard by the Leica sales department. 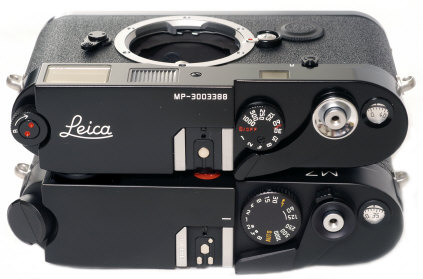 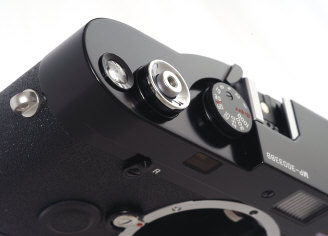 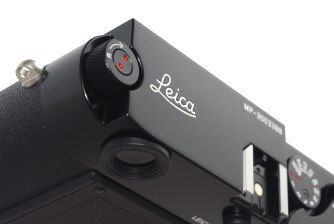 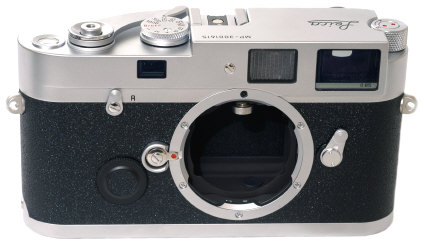 Historically over the entire history of M cameras since their introduction in 1953,  Black Paint M cameras have proven themselves to be worth more.  The beautiful silver chrome is also a fine choice.   However, I urge you to avoid the black chrome finish.  Take a look at a worn M5, M4-2 or M4-P and you will see why.   Black chrome cameras wear downright ugly.   Why was black chrome ever introduced in the first place?   Because it was and is cheaper than a black paint finish.  The first camera ever to have a black chrome finish?  I am fairly sure that was Kodak's top of the 110 line Kodak 60 rangefinder. 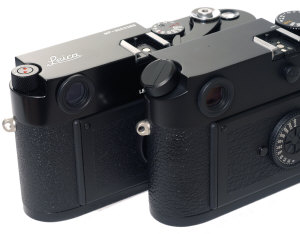 If you are ordering the MP, do yourself a big favor and choose the M4 / M7 style film rewind crank.   Your camera will be easier to use and worth more in the long run due to the rarity.   The rewind lever is such a huge shooting convenience that its difficult for me to imagine any knowledgeable Leica M shooter actually preferring knob film rewind.  It makes a much sense as having a welded film bottom plate which much be removed by the Leica factory every time you want to shoot a new roll of film.   Watch out for the shooter that claims they prefer the M rewind knob to the M rewind lever.  It's pretty much a sure sign they are just another clueless hyped empty headed fan following the official MP MECHANICAL PERFECTION words espoused in Leica advertising.

From a long term value standpoint there is only one choice -- the Classic Leica Script engraving.  This choice will likely make it easier for you to eventually sell the camera.  Truth be told, paying extra for an a la carte M camera and then NOT having the top engraved with Leica script is like wearing a sign on your forehead saying

I DON'T KNOW LEICAS BUT THEY ARE A GREAT FASHION ACCESSORY

AND NOW LEICA WILL NOT GIVE ME MY MONEY BACK!

(OK, so that sign does have small lettering unless the proud Leica owner has one hell of a big forehead.)

IF you are choosing silver chrome, choose the no extra cost silver trim.  Why?  Because the plastic tipped advance lever is more comfortable to use.  The black paint trim will also look good on a chrome camera, if you prefer the all metal film advance.    If you are choosing black paint, choose the black paint MP trim.  Silver trim on a black camera looks odd and will not help the resale value.  Of course repair techs can change M advance levers any way you like at any time.

The simple fact is that despite all of Leica's tinkering with body covering choices, the traditional vulcanite is far and away the most popular -- and will stay that way.    Vulcanite  will likely make it easier for you to eventually sell the camera.  Vulcanite was replaced over time with a new body covering that is well, cheaper.

Choose whatever suits your needs best.    The .58 has a better finder for the 28 and 35 framelines.   The .72 is the best choice for all focal lengths.  The .85 has a better finder for 50 and longer framelines.   Be aware the .58 and .85 finders are now offered only in the a la carte program -- or special edition cameras which may come out from time to time.  Translations: the .58 and .85 finder cameras are rarer  and worth more, everything else being equal.

Your camera will have higher resale value if you choose the complete frameline set of whatever finder magnification you prefer.  Still you can have your repair tech remove or add pretty much any combination of 28, 35, 50, 75, 90, 135 framelines you like.

Unless you are a world famous person or a world famous photographer, having yourself committed until  the urge to have your name engraved on the camera passes may not be a bad idea.  A camera engraved with the name of an average Joe or Jane will translate to reduced resale value by 30%.  Why?  The next owner will not likely want your name on their camera.

10) New improved rangefinder condenser lens or no?  Gotcha.  Introduced with the MP, all MP's and later M cameras including ALL a la carte M7's have the M4's missing rangefinder condenser lens removed for cheapness in the M5, M4-2, M-P, M6, M6TTL and earlier M7 cameras.   It is an improvement, but not a huge improvement.    It only became huge once Leica finally realized the MP would sell better if Leica made a big deal of the condenser being included again.  That same missing condenser lens can be added to cameras which left the factory without it - for a price.

IF you ordered the above combinations for US delivery on 11/18/2004, the MP configuration  suggested above would set you back $4070,  the M7 configuration $3930.   In November 2004 the dollar is falling and the Euro rising, so I would expect Leica prices to go up further if this trend continues.   Sure enough, as time went on, a la carte prices much less M7 and MP prices went sky high.

In the US, there will be only 40 a la carte Leica dealers.  You have to configure your camera on line at the Leica site, and then pay for it at an la carte dealer.  Or you can visit your dealer first and see samples of same.  It is an interesting experience, complete with a special 3 camera a la carte camera case.  The bottom line is that you can have your very own flavor of Leica M, not a bad option when you think about it.

Revised: December 06, 2020 .  Copyright © 2004-2020  Stephen Gandy. All rights reserved.    This means you may NOT copy and re-use the text or the pictures in ANY other internet or printed publication of ANY kind.  Information in this document is subject to change without notice.  Other products and companies referred to herein are trademarks or registered trademarks of their respective companies or mark holders.