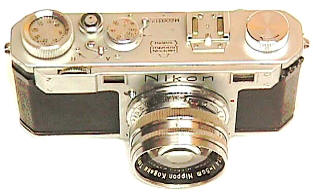 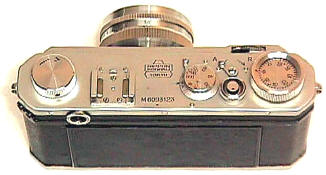 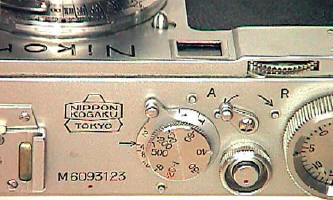 There are two main types of M's, the earlier ones without flash sync, and the later ones with flash sync.    Please read  profiles on the Nikon One and Unsynced M for more details.

No, the back does not have a hinged door, in fact it removes altogether.  The faux back door is just decorative.

This pic shows most of the controls of the first three Nikons.    On the right you see the focusing wheel, designed for the right index finger to focus the 50mm lenses and the smaller lighter wide angles.  Next to the focusing wheel is a smaller infinity lock release.   The first three Nikons automatically lock at infinity focus.  To release the lock, depress the infinity lock release.  The little chrome knob protruding from the front plate, next to the lens mount, is a 2nd infinity lock release.   The film counter on the advance knob is manually set.    The lever with the A-R setting is for advancing or rewinding the film.    The shutter speed dial has two ranges.  The top one runs from 1/500th to 1/30th.  To change speeds, lift and rotate it AFTER the film is advanced.    To use the lower speeds, set the top dial at 20-1 and then rotate the lower dial between the 1/20th to 1 second selections.   Note the prominent M preceding the serial number.   These early Nikons use the Leica type cable release which threads over the shutter release and inside the shutter guard.

Note the dual awkward baseplate locking lugs, copied from the Contax,  common to the Nikon One, M, and S.

The Nikon One, M and S's  all had second serial number on the inside of the camera back.  If the backs are switched and you have the  wrong back on the camera,  collectible value is considerably decreased. 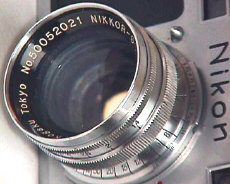 While the 50's were never marked Made in Occupied Japan, all of the other original lenses were -- but in different ways.   As time went on, the MIOJ generally became smaller and less conspicuous.   Only the earliest 35's have white on black lettering at the back of the lens, later lenses are a black on black engraving.  MIOJ on lens barrels were replaced with a difficult to see MIOJ on the inside of the lens rangefinder cam.  The 5005 series 50/1.4 shown above was the first of a long line of Nikon 50/1.4's.

The early accessory lenses available for Nikon were the 35/3.5, the 85/2, and the 135/4.   That's right folks, Nikon started out with just four focal lengths covering the 35 to 135 range.  All are apparently derivatives of the pre-war Zeiss Contax designs.    The early lenses, like the early cameras, quickly saw many variations.   All 135/4's are rare lenses, soon replaced by the 135/3.5. 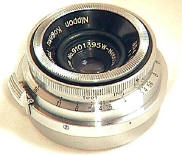 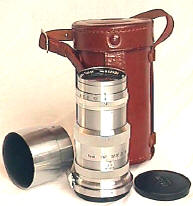 Today it's difficult to find any Nikon M or its proper lenses.  Assembling a complete M outfit with the proper four lenses and M Variframe finder  is very difficult. 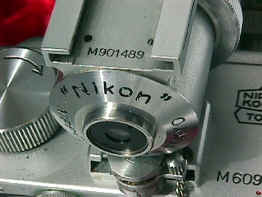 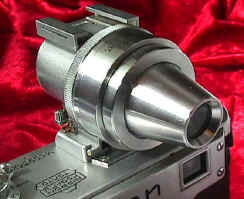 Since the finder built into the camera was only for the 50,   the Vari-Frame 35-135 finder was VERY important to use the other lenses.

The finder has a M preceding the serial number, and is marked Made in Occupied Japan on the bottom of the accessory shoe.   Rather than zooming its image size, it simply cut down the field of view as you change from the 35 to the 135 frame. 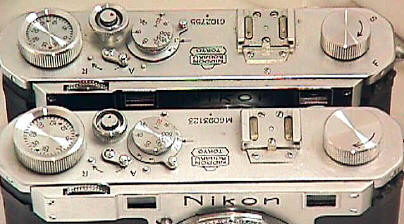 While essentially the same camera, the M has larger wind and rewind knobs than the S, as well as a smaller shutter guard.

It's very easy to confuse a M or even a One with the Nikon S.  A few years ago I watched in disbelief as a dealer mistook a unsynced M with a bad shutter for an S -- and sold it for $100!!

The funny thing was that that $100 camera was sold by one of the largest and highest priced camera stores in Los Angeles.