Inspired by DDD for Photojournalists?

The Nikon S4 has always been somewhat of a mystery.  Why would Nikon bother to introduce a camera that was so close to being the same as the S3?   The S4 amounts to an stripped down S3 minus the self timer, 35mm frameline, automatic film counter and motor drive connection.    Was the S4 simply a lower cost camera, or was there something more?

According to Michael Beaucage who toured the Nikon factory in 1960 as a young US serviceman in Japan,

the S4 was inspired by David Douglas Duncan as a no frills camera for photojournalists! 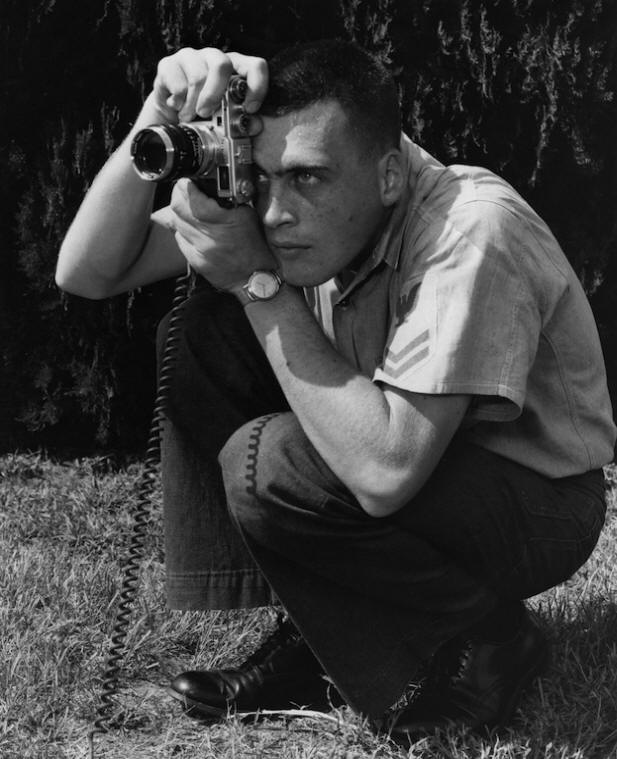 In 1960 I had graduated from the U.S. Navy Photographic School in Pensacola Florida. My first duty for two years was at the Fleet Air Photo Lab, Utility Squadron Five, Naval Air Station, Atsugi, Japan.  I was 19, away from the states for the first time, there for the next two years. Wide eyed and young.   Thirty-five or so photographers and a wide variety of photographic opportunities. Black and white, no color.

I had an older Leica and wanted to upgrade: big decision, Canon or Nikon? At the Atsugi post exchange, I chose a Nikon SP, and really enjoyed the 1:1 view finder (bye, bye Leica), loved all the frame lines, disliked the Nikon camera back but got used to it. I really adapted to the Nikon RF and started looking for a second body once I had a complement of lenses. I considered the S3, but the S4 got my attention because it was inexpensive and I could use it when there was a lot of bad weather, dust, risk of damage or loss. A burner camera.

I thought it would be a good idea to visit Nippon Kogaku KK, the factory where the cameras were made. Scored an appointment, got a hotel room and the morning of the tour I strapped the S4 around my neck and put the SP in a case. Hailed a cab and was met at an industrial complex, single story, nothing fancy, this was 1960 so reconstruction was still happening.   I was way outside my head as a Nikon “fan boy”. No problem with having been in the military. Never had any issues being a “gaijin.” We wore civvies off base. With the hair cut and black shoes, people knew who was in military. The appointment response was quick, I sent a short letter, they replied, and I answered.
Special treatment? Always, the Japanese are courteous to a fault. My tour of the factory was less than three hours. No food or drink! :-)  No photos of the factory, I would have felt funny snapping, and they might have talked to me.

The tour was just me and an English-speaking guide. I remember the assembly area, women working the line, the cameras were moved from person to person manually across a shelf with access on both sides. Interesting that the optical lab where lenses were being cast had dirt floors. I missed the polishing area, likely they moved me along.

The guide asked about my S4 and took me to an office where I was introduced to a man who interviewed David Douglass Duncan sometime between 1953 and 1955.  I don't remember his name, but he was 20-30 years older than myself.  Duncan was a hero of mine when I first got interested in photography—1954. For Life magazine he was a Korean photojournalist, did the photo doc of Pablo Picasso among many other assignments.

Duncan used Leica mount Nikkors on his Leica.   DDD discussed with a design engineer what he considered to be an ideal photojournalist tool. He wanted a 1:1 view finder—both eyes open when shooting. The simplest of viewfinder frame lines, 35mm, 50mm and a short telephoto lens, he was used to a 90mm, 105 is close enough. No self timer, it just gets in the way. Functional simplicity was the idea. When the S4 was being planned, the interview with DDD was part of the S4 design consideration which was to have a specialty camera for photojournalists.  Nikon did not market the S4 to photojournalists as a specialty camera because the Nikon F was introduced and took all the marketing attention.

I kept the S4 when I sold the SP and purchased my first Nikon F in 1962. After eight years service I became a science photographer specializing in publishing in Berkeley California. Sold the S4 during the mad rush (early to mid ‘80s) by Japanese collectors looking mostly for anything Leica. I made a nice living with the Nikons, Kodachrome, and Norman strobe lights.

The photo was taken when I went to advanced Photo School in Pensacola, Florida. The assignment was to photograph someone working with a tool. I set up a 4x5 Speed Graphic with a shutter solenoid, sync cord which was connected to the PC plug of the S4. A selfie circa 1962, likely the only selfie ever shot with an S4. I don’t think “selfie” was a word in 1962!

Revised: September 12, 2017 .  Copyright © 2016  Stephen Gandy. All rights reserved.    This means you may NOT copy and re-use the text or the pictures in ANY other internet or printed publication of ANY kind.  Information in this document is subject to change without notice.  Other products and companies referred to herein are trademarks or registered trademarks of their respective companies or mark holders.