The Miranda Orion is one of the rarest of 35mm SLRs, and one of the most historically significant.  This 1956 camera was the first Japanese SLR to use a pentaprism.  The Orion was the product of the Orion Seiki Company, founded by the brilliant and innovative Mr. Akira Ogihara.  His genius   brought forth three notable products which cast a long shadow of influence over the Japanese camera  industry. 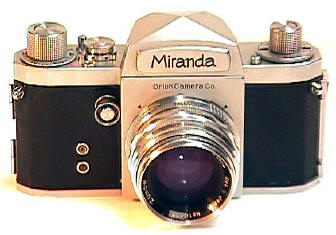 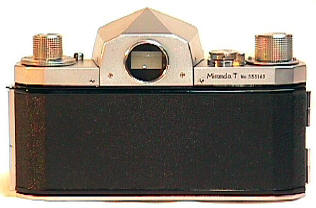 The famous superbly made Orion adapter, available for either Contax Rangefinder lenses  or Nikon Rangefinder lenses,   allowed  their use WITH  rangefinder coupling on Leica screw mount cameras.  See Separate Profile.   Once word got out, demand exceeded production.  That is still true today, with collectors avidly seeking them.   I was lucky enough to get one literally for free--it was at the bottom of a camera bag and was not even figured into the value of an outfit I bought.

Orion's Mirax Reflex housing,  converted Leica, Contax and Nikon rangefinder cameras to single lens reflexes for longer than 135 lenses (similar to the Leica Visoflex).   It foreshadowed the later Miranda's great versatility by using interchangeable adapters for different cameras.     Perhaps most importantly, it had an optional pentaprism.

Orion's entry into the SLR market was ready by the end of 1956, the famous Miranda Orion.   The first few hand made prototypes were called the Phoenix.   Due to trade mark restrictions with a German camera, the Phoenix was renamed Miranda.    The first model was the Miranda T, but the first T's also had the "Orion Camera Company" on the   front nameplate, below the  Miranda name.   Thus the "Miranda Orion."  Hand made at the blistering rate of about 50 per month,  the first Miranda sallied forth to change the photographic world.

Miranda Orion Firsts and Influence, the Orion exerted quite an influence: 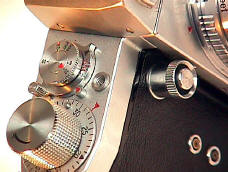 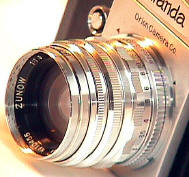 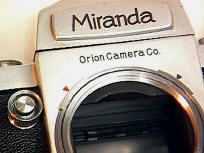 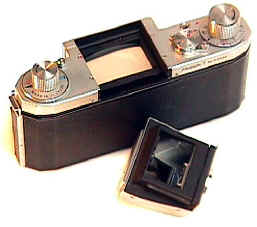 The Orion's features might seem outdated today, but for 1956, it was on the cutting edge. Just consider what today's Nikon F5 and EOS 1V will look like in 2040--now that's a depressing thought.