hmm.  where do I start.  once upon a time a long time ago in a place far far away there was a limited production Leica M3 made just for Professionals.    Brilliantly, it was called the Leica MP.    The year was 1956.  Only about 450 were made.   Today one in nice shape is likely to cost more than most recent used cars.    It had a M2 style advance counter and M2 style take up spool, and came complete with a Leicavit bottom mounted trigger advance.       The Leicavit attached to the bottom of the MP and allowed fast left handed lever film advance, with practice up to about 2 1/2 fps.  Part of the special MP appeal is that Leicavits would not fit standard M3's, only the MP, M2, M1, and MD. 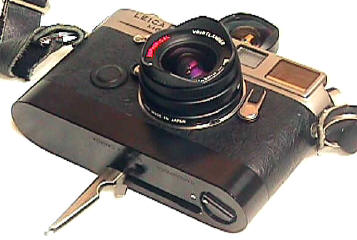 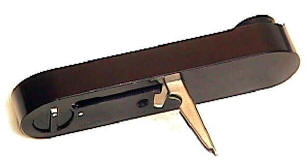 Today  M Leicavits are very rare and  far between, much rarer than the earlier screw mount Leicavits.   Even if you can find one,  many are worn out and broken.      And so, brave Leica M photogs waited roughly forty years for an easily obtainable M Leicavit.    Alas, father Leica discontinued the Leicavit MP in 1966.   A new generation Leicavit MP was introduced at the 2003 PMA show in Las Vegas, complete with its minimum advertised price of $995.

In fact, I had never seen one in the flesh, or in the lever, until I found a used Rapidwinder.  Once I got it home and attached it to my trusty M6, I was surprised how rough it was and how loud its return spring was.  A few emails later, Tom confirmed that indeed, there was a problem, and to ship it off for exploratory surgery.  I did, and about two weeks later it arrived back home, all fixed and upgraded to a chrome lever wind.  I was astonished that Tom did the repairs for free, even though I was not the original buyer.    He explained this as his standard policy on ailing Rapidwinders.   Too bad camera manufacturer's don't share his viewpoint.

From 1960 to 1966 Leica produced an estimated 2-3,000 bottom trigger wind Leicavit MP's for the Leica M1 and M2.  Today they are sought after collectibles often bringing upwards of $3,000 in nice shape.  Unfortunately many no longer work due to a lack of repair parts.   There are over 80,000 M2's, yet there may be less than 1000 working Leicavit MP's and M2 Rapidwinders.  Note that the neither the M6 Rapidwinder, nor the new 2003 issue Leicavit MP will fit the M2.

Tom  produced a limited edition of 300 M2 Rapidwinders.   Only 40 of the 300 sold were Black Paint, the rest silver.    They are now discontinued and sold out. 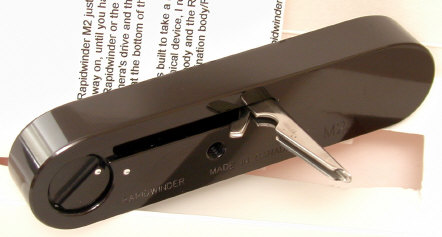 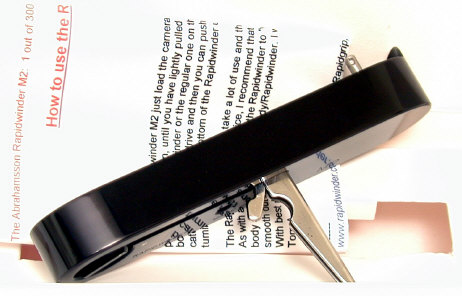 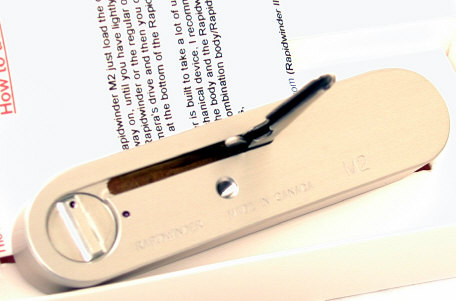 IF you look closely at the instruction heading in red, you will see "1 out of 300."

In early 2003 Tom started production of his Barnack Rapidwinders for the Leica IIIc/IIIf/IIIg.

Tom Abrahamsson's Rapidwinder has a unique place in the Leica M world.   It is the only major non Leica manufactured Leica M accessory in current production, thereby filling an important void in the M lineup. 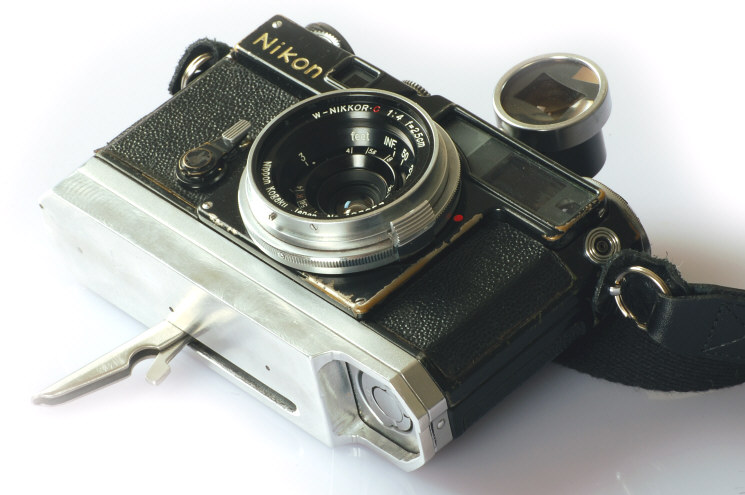 Revised: January 10, 2017.  Copyright ©  2002-9  Stephen Gandy. All rights reserved.    This means you may NOT copy and re-use the text or the pictures in ANY other internet or printed publication of ANY kind.  Information in this document is subject to change without notice.  Other products and companies referred to herein are trademarks or registered trademarks of their respective companies or mark holders.