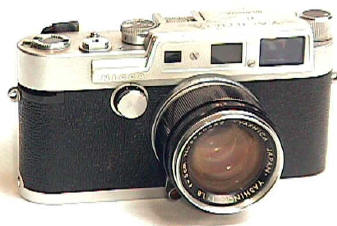 Introduced in 1959 just when rangefinders were losing the marketplace to SLRs, the Yashica YF lasted only about a year.  Ominously, it was introduced in the US concurrently with the Nikon F, which would tilt 35 design forever to the side 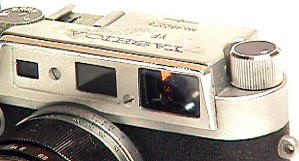 of the SLR.   The YF  was the first marketplace result of Yashica's  newly acquired Nicca company.  Long the manufacturer of leaf shutter 2 1/4 twin lens reflexes, Yashica apparently bought out the Nicca factory to expand to focal plane shutter cameras for the first time.  With an excellent finder with parallax corrected 50 and 100 projected brightline framelines, very comfortable shutter release and film advance, and Leica M3 like back door film loading, personally I rate the Nicca Yashica YF as a better shooter than any of the knob wind Leicas, or any of the Canon rangefinders before the Canon 7. 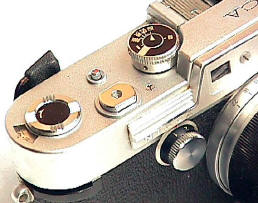 I've always liked Nicca because it was a little company not afraid to go head to head with the "big guys"  with design innovations that even Leica could have learned from.   No, Nicca didn't equal Leica's famous 1950's fit and finish, but they did come surprisingly close at only 1/4 the price.  Ironically,  today Nicca's 2nd class "cheaper" finish starts looking pretty darn good when you place it besides the modern black Leica M6--itself a victim of modern cost cutting.

Nicca  was a prominent innovative Japanese maker of quality Leica screw mount cameras.   Nicca's first efforts were pretty much knockoffs of the unsynced Leica III.     As time went on Nicca added more and more features until at the last they were quite innovative.    Most of Sears Tower Leica screw mount RF cameras were actually Niccas with a Tower nameplate.

While the YF was sold with the black / chrome 50/1.8 Yashinon,  Nicca's earlier Leica mount cameras had  Nikkor screw mount lenses made by Nikon as original equipment.     Before Nikon achieved super success with the Nikon F, they supplemented their sales by making most of their lens lineup available  in Leica screw mount.   Nikon offered Leica rangefinder coupled lenses  from 25 to 135 mm, and even  had Visoflex versions from 180 to 500 mm.      Standard lenses found on earlier Niccas include the collapsible 50/2 Nikkor, the rigid 50/2 Nikkor, and the 50/1.4 Nikkor.  Many people regard these early Nikkors as sharper than their contemporaries from Leica.  In fact, it was the screw mount Leica lenses that actually started Nikon on their way to greatness.      The photography column of the NY Times in  December 1950 mentioned amazing new Japanese lenses in Leica screw mount called "Nikkors."     American Photojournalists covering the Korean war had tested the new Nikkors to be better than their own  German lenses.    That story and the sensation it caused was the start of  not only Nikon's incredible success, but also the success of the entire Japanese photo industry. 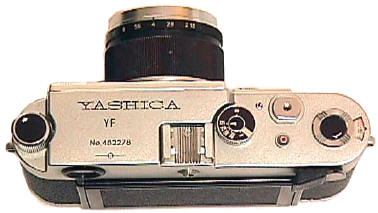 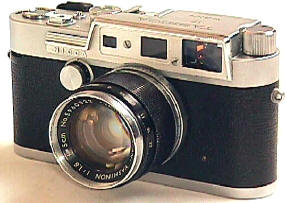 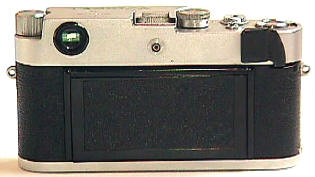 Having "Yashica" on the top plate and "Nicca" on the front, the YF was Yashica/Nicca's last and best production Leica mount camera--an innovative mixture of old and new features: 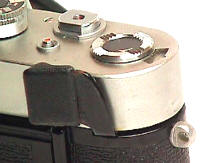 The Lever Advance is VERY large and easy to grasp.   It's an unusual design which has a fulcrum point inside the body rather than on top of the body.  It's different from a Leica M, but just as comfortable as far as I am concerned---which is saying a lot.  In fact, I am not sure I don't like the feel of the YF's film advance better.

The Shutter Release is VERY large, and more importantly, VERY comfortable, roughly 1/4" square, with a very smooth release and threaded cable release.  In fact, it is the largest shutter release I can remember on a mechanical 35mm camera.   Push down the button rewind to rewind the film.    It's that chrome button on the top deck near the top shutter release and the manually set film counter.

Although  sold as a budget camera for only $99 with 50/1.8 lens, the YF was indeed a quality camera and deserved a longer life.   Unfortunately it was  introduced too late.    Like many other early 60's Rangefinders,  it succumbed to the great 35 mm SLR onslaught of the early 60's.     HPR in his book Leica Copies,  estimates production between 7,000-10,000 -- making this a relatively hard to find camera.

IF you can find a YF,  it's a very satisfying shooter or collectible.    The YF also  shares  the honor of being one of the Contax G2's ancestors along with the also profiled Nicca 5L.     More info can be found at your local library in the November 1959 Modern Photography test on page 110, or in the June 1959 issue of Popular Photography on page 34.

Another, esoteric reason I like the Yashica YF, is because it's a neat looking camera which does NOT look like other cameras.  Call it a style thing.  If most other people use the XYZ camera, given a choice, I want something else.  Another reason I like it is the "NICCA" front plate -- it is SO obscure.