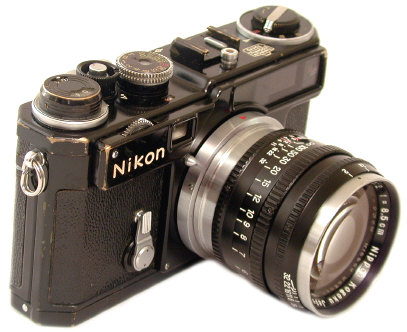 While the Nikkor 85mm f/2 chrome is relatively common, the same lens in black is very hard to find. The earlier chrome 85mm f/2 was a sales leader until the 105f/2.5 was introduced and sent 85mm f/2 sales into a tail spin. Towards the end of rangefinder production, the heavier chrome lens was replaced by the much lighter black 85mm f/2.  This later lens is a real pleasure to shoot.  It's a favorite of mine. The 85mm f/2 was one of the five original Nikon lenses, starting in 1948 with the Nikon One.  For years, until the introduction of the 105f/2.5 in late 1953, it was the ONLY Nikon portrait lens.

The 85mm f/2   was made in three mounts: Nikon, the very similar but different Contax mount, and Leica screw mount. The Contax mount lenses  look just like the Nikon mount,  but have a large engraved "C" on the lens barrel. The chrome version is very well made, but very heavy.   The earliest lenses are "MIOJ" or Made in Occupied Japan.  They are so marked on the side of the lens barrel, or on the rear of the focusing cam.   These markings, along with the earlier "Nippon Kogaku Tokyo" was later replaced with "Nippon Kogaku Japan" on the lens filter ring.   The large majority of 85mm f/2 rangefinder Nikkors were  made in a heavy, well finished chrome mount.

Two different black 85mm f/2's were produced towards the end of Nikon Rangefinder production.     I've encountered only about one black lens out of 25 to 30 chrome ones.   Of the black lenses,  about 95% of them seem to be the later version.  The first black version is VERY rare in any mount.    Remember you can use even the earliest 1948 Leica mount 85mm f/2 lens on your new M6 just by adding a standard Leitz screw to bayonet adapter.

The optical formula of the 85mm f/2 apparently remained the same throughout its life, a modified 85mm f/2 Zeiss Sonnar design.  However, the later lenses do have a different and presumably improved coating.    The 85mm f/2  enjoyed an excellent  reputation as an outstanding lens.   For years until the introduction of the 105f/2.5, it was THE portrait lens of the Nikon system.    All 85mm f/2's rangefinder Nikkors have the same 48mm  filter size and close focus distance,  3.5 feet.  Like most Nikon rangefinder lenses, turn the lens and the body helical to infinity before mounting or dismounting lenses. 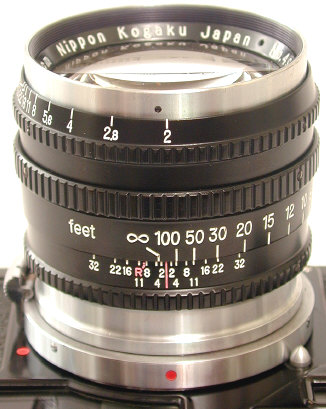 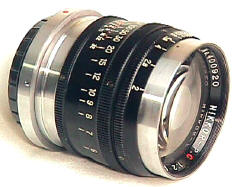 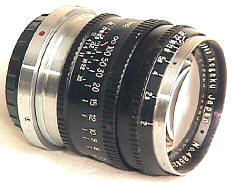 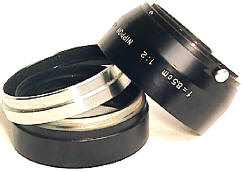 About the time the SP was introduced in 1957,  the  85mm f/2 was changed  to a more "modern" black and chrome finish.  There are  two versions of the black  85mm f/2 Nikkor.    They can be recognized by different barrel knurling designs.  The  first version is harder to find than the second.    Shown above is the first version 85mm f/2 black on the left, the 2nd version on the right.   The first version has noticeably finer barrel knurling.

There are three basic 85mm f/2 shades in a number of  variations.  Shown are the chrome/black shade, split in two for filter placement, and the late snap on shade.  Not shown is the all chrome shade for the earlier chrome 85mm f/2's.  All 85mm f/2 shades, whether early or late, fit all 85mm f/2 RF Nikkors, regardless of version or mount.