There is very little information published on US Military 35mm cameras. Most of this information has never been published in English in guide form before.  The US military was very hard on its photographic equipment. Be wary of US Military marked cameras that seem too clean and near new -- not that genuine cameras do not exist.  I've been told about some KS-80a sales in Europe whose serial #'s leave me with little doubt they were not genuine.

While I have been successful in finding four different US Military Nikons, there must be other versions out there. Generally US military Nikons share three characteristics: 1) used very hard in service 2) made in limited numbers, probably in the 300-400 range for each model 3) scarce information

From the early 50's to the early 80's, EPOI(Ehrenreich Photo-Optical Industries) was the sole importer of Nikon into the United States. EPOI played an instrumental role in Nikon's design, development, and success. They produced most of the military Nikons. The information here has been assembled from various sources, including the former National Sales Manager of EPOI, retired EPOI military sales people, and a former US Navy carrier camera repairman.

This variation was unknown to the Nikon Historical Society until I submitted pictures. This is a standard black motorized Nikon F, with a large military ID tag attached to the back, similar to the tag on the back of KS-80A Type 1 motors. Recently, another has turned up and was published in the Nikon Historical Society. These were apparently used by the US Air Force, since I found one with the "USAF" initial hand engraved on a K-48C PICS

Nikon made a very limited number of specially modified F and F3 for the Apollo program. The story I have been told is that they are still in use by NASA.  Approximate production, about two dozen each. They are pictured in some Nikon ads of the late 60's and early 70's.  PICS

Nikon F5 US Navy is current issue in some outfits.

Digital Kodak DCS420, which is based on the Nikon N90s, in use now  by the U.S. Marines

Topcon's Super D was very popular with the US Navy. Different versions were ordered 1) without the mirror lock up 2) with the mirror lock up 3) the Super DM. The first two versions were ordered primarily in chrome, but some black bodies have show up. All variations have "US NAVY" engrave on the baseplate. While the Navy ordered standard Topcon lenses, a few special US Navy lenses were ordered with infinity lock and a red "N" preceding the serial number to indicate "Navy." One such lens is the 135/2.8 Black.

A number of Navy Topcons were assembled in a "Submarine Periscope 35mm Camera Set KS-93A"  set which included a  Topcon Super D body (non mirror lock version), motor drive, and 100/2.8 Topcor, supplied in an aluminum case.  The Super D was marked US Navy on the bottom plate.  The 100/2.8 had the red "N" engraving on the filter ring indicating Navy.

Production is unknown, but the Topcon US Navy Super D's are much more plentiful than the Nikon Navy F's. I believe a reasonable guess would be 2,000-5000 cameras, produced through the three major Super D variations.

In one of its 1968 ads, Topcon proudly proclaimed its choice by the US Navy and the FBI. What markings, if any, were used on the FBI cameras is unknown. At the time, Topcon was distributed in the US by Beseler, and the camera was called the Beseler Topcon.    A popular story at the time was  Topcon got the Navy contract because a Navy purchasing agent thought Beseler was an American made camera!   I'm not sure, but I would not be surprised if it were true.

A few Topcon Uni's have show up with US Navy property tags.

I have seen one olive green Topcon Super D. I was told by the Topcon rep it was made on spec for a US Government contract bid, but was not ordered.

Canon F1's and AE-1's with US Navy engravings have shown up. Navy lenses usually have hand engraved markings, if any. Like the Nikons and Topcons, they are were usually used very hard.

In 1975, Canon made a special order of 2500 original F-1's sets in olive green for the US Army. Very very few have turned up for sale, presumably most are still being used.  Photo courtesy Doug Napier 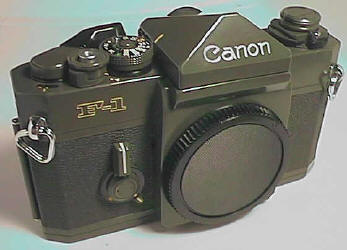 CC made in black, without meter with a front focusing 4.5 lens for the Army.   very rare, said to have  been made.

C4 black, said to be made for the Army, 1951-57, black anodized finished.   Photo courtesy Phllip Sterritt. 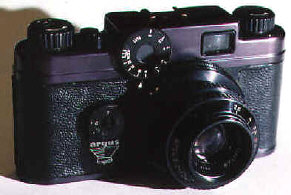 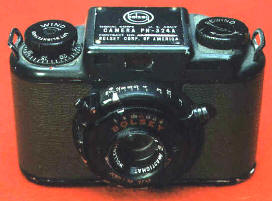 Air Force version of the B Special (in 'regular' colors) with an extension tube capability for closeups.  Designated "CAMERA, GROUND, 35MM    PROPERTY USAF." 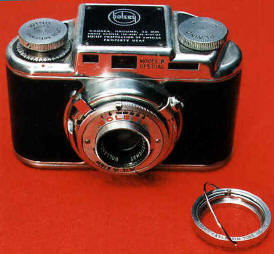 One of the most interesting US Military Cameras is the Kodak 35 made for submarine service during W.W.II. Olive green, it was supplied in a special wooden case with instructions for attaching to the periscope. Also made was a portable Kodak enlarger for same, complete with its wooden case.

The olive green Kodak 35 is much better known and documented. 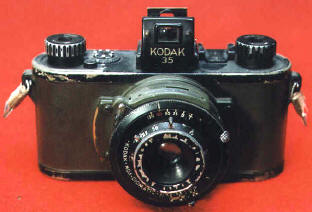 USAF KE-7(1) Camera.  This camera is a Black Anodized version of the Kodak Signet 35,
it has no serial number, there is a military contract plate on the  bottom of the camera.

Strangely enough, a few Kodak 126 reflexes with military id tags and contract numbers have shown up. No idea why they would purchase something like that.

Illoca IIa stamped "Made for Navy Service" on the bottom plate.

About half of the M4M's I've seen were former US Navy cameras.  Markings varied from crude hand engravings to a special US Navy property tag.

US Navy Leicaflex SL's and SL-2's with bottom plate US Navy engravings are also known.

The Navy also used M2 Viso outfits.   They were supplied as complete outfits  in special cases.  The cameras  were  not given   military markings--only the haliburtan cases!

The US Military seems to have had a very non-standard way to deal with photographic equipment.

Many items were bought directly from manufacturers  in Pentagon military contracts, complete with military engravings that are so popular with  today's   camera collectors.    Many cameras were simply bought by their local supply officers, without special engravings or markings, sometimes with just  hand engraved markings!  This email illustrates the variety:

During 1969 - 1971, I was in a US Army counterintelligence unit. At one   time or another I had my hands on the following cameras:

As time goes by, no doubt many more US military cameras will come to the light of today's camera collector.

Revised: May 31, 2013 .  Copyright © 1998-2013  Stephen Gandy. All rights reserved.    This means you may NOT copy and re-use the text or the pictures in ANY other internet or printed publication of ANY kind.  Information in this document is subject to change without notice.  Other products and companies referred to herein are trademarks or registered trademarks of their respective companies or mark holders.