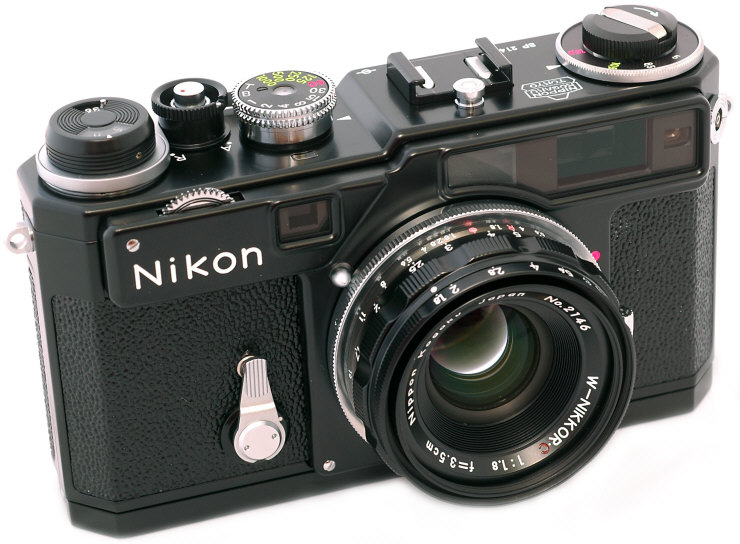 The limited edition black Nikon SP 2005 is a reproduction of the original 1957 Nikon SP except for minor details. 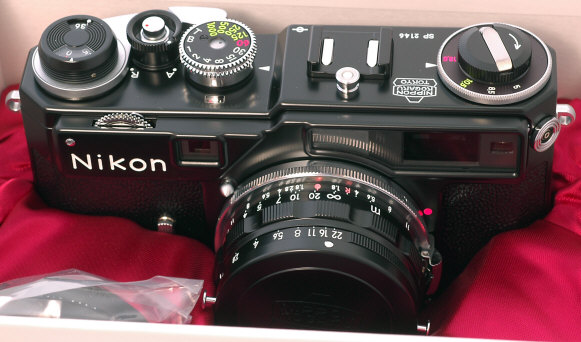 I join many other Nikon collectors in viewing the black paint SP as the ultimate Nikon ever, due to its many innovative features for its time.  For more info:  SP History and the black original Nikon SP with motor 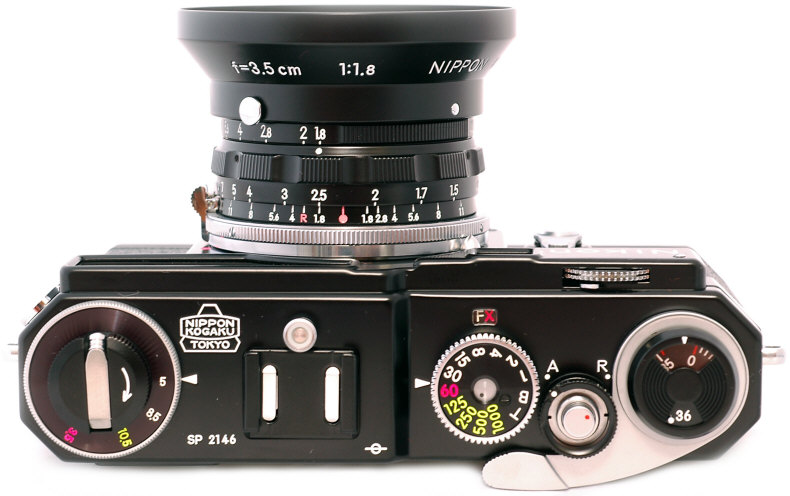 Nikon  rocked the Nikon collector's world January 14th  2005 by announcing a new 2005 production of the fabled and Nikon's collector favorite BLACK SP with 35/1.8 !!    I am told the factory sold out by May.  To serious Nikon collectors, this is like winning the lottery!  The factory sold out in May 2005. This probably means future appreciation and forlorn Nikon collector stories of the whopper that got away:  "I can't believe I had a chance to buy a new Black Nikon SP, and didn't do it!"   Nikon originally discontinued rangefinders in 1964.  In 2000 Nikon stunned the rangefinder world with a reproduction of the 1957 Nikon S3.   Five years later Nikon amazed collectors more as the ultimate film Nikon was once more introduced just as most other camera manufacturers were cutting back film cameras to concentrate on digital. 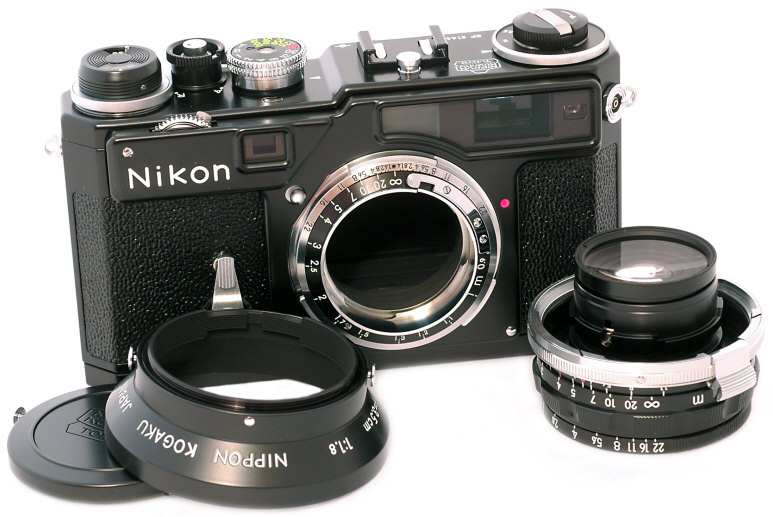 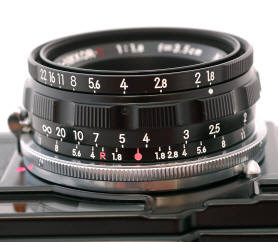 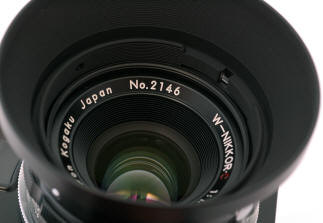 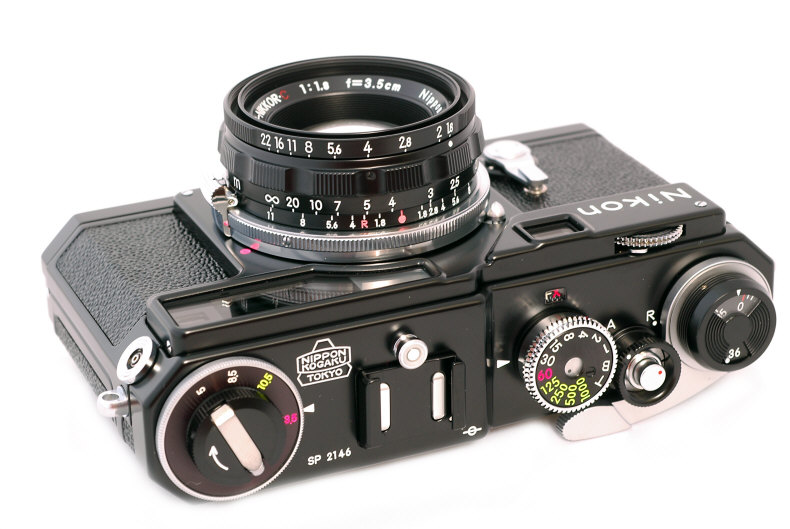 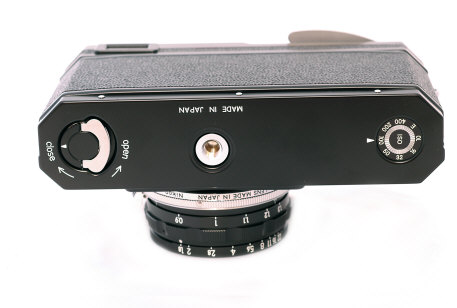 Just like the original Nikon rangefinders, the back of the SP 2005 removes for film loading.  The film advance spindle also has the motor lug for the extremely hard to find Nikon SP motordrive, the first professional quality motor drive for 35mm photography.   To mount the motor, you need the motor and the motor plate which replaces the inside bottom plate of the SP, and you have to have a repairman adjust the motor to that body. 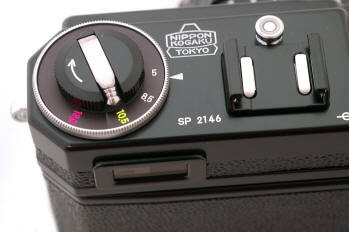 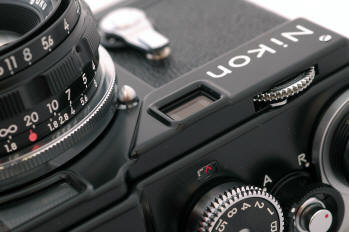 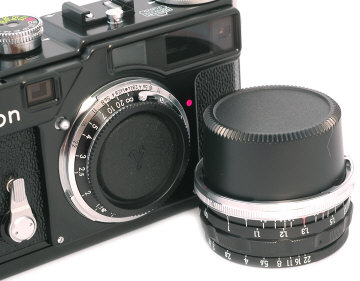 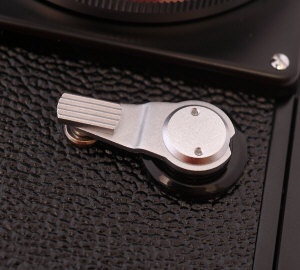 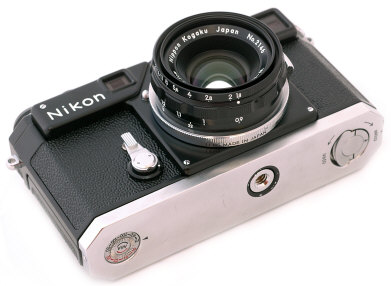 As many owners of near mint vintage SP's have discovered, new backs are virtually unobtainable.  This is also true for the S3 2000 and SP 2005 because Nikon does NOT sell parts for these cameras easily.   If you plan to shoot your SP 2005, do yourself a HUGE favor and either always leave the bottom of the case on, or shoot with a substitute camera back so not as to mar the practically impossible to obtain original back.  Luckily the back from the relatively inexpensive Nikon S2 will fit your SP, though the reverse is not true.  Take note that although vintage S3's and SP's backs are completely interchangeable with the newer S3 2000 and the SP 2005 backs, the vintage and later edition backs are not identical. 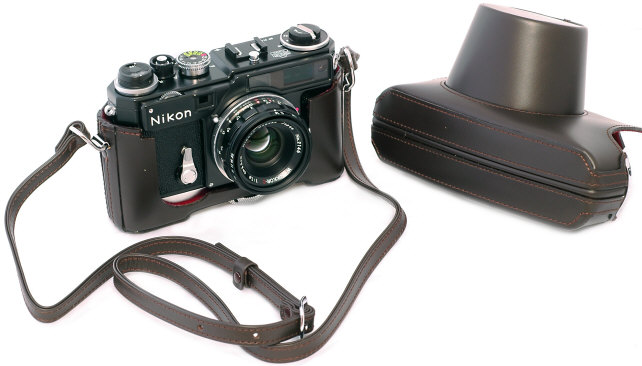 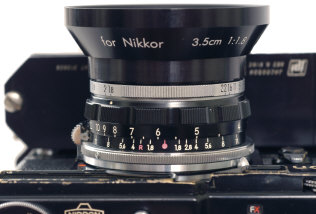 The Nikon SP 2005 Rangefinder in Perspective 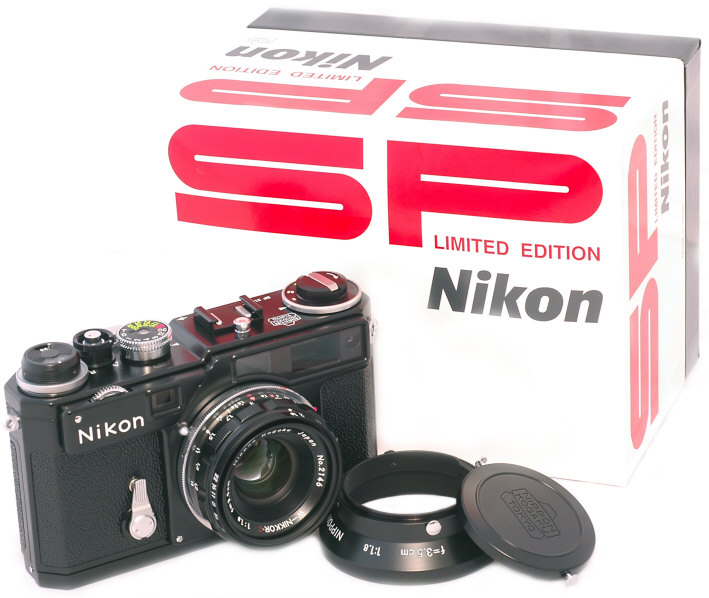 I find Nikon's timing on the SP 2005 really interesting.  When most other camera companies are discontinuing film cameras left and right,  Nikon arguably the most advance 35mm film SLR ever at Photokina 2004 in the Nikon F6,   only to follow it up three months later by astonishing the 35mm world with the SP 2005.   Now Nikon is paying a homage to its past with the new Black Nikon SP.    Personally I see the F6 and new SP cameras as a very classy move by Nikon management.  Just as many people are writing off film, it  Nikon is producing some of the best 35mm film cameras ever.  The Nikon company arguably has a "camera soul" -- something which is very hard to imagine with most "damn our tradition, make the most money" camera makers.

SP owners would do well to have at least one user Nikon F for parts.  IF the cloth shutter curtains ever give way, have them replaced with the indestructible titanium shutter curtains from the Nikon F.   Take note Nikon could have made the SP 2005 identical in all respects to the vintage SP.   Apparently small differences were introduced to allow Nikon nuts to tell the difference between the vintage and new 2005 camera and lens.    The SP 2005 has both electronic flash and flash bulb synchronization just like the original, making the SP 2005 is an excellent candidate to be Nikon's last camera synchronized for flash bulbs!  Nikon really did this camera right.  Nikon fans and Nikon employees can be very proud.  This is the real deal.

Owning a SP 2005 is owning part of photography's history and heritage.  IF you are one of the lucky owners, I hope you take the responsibility seriously and take care of the camera so that it will eventually pass on to its next owner in good condition.   From the day the SP 2005 left the Nikon factory it deserved to be in a museum, but it also deserves to be shooting film and showing the world what the best of 35mm photography once offered.

At a quick glance the cameras appear identical to the casual observer, but a closer looks shows minor differences:

This is a list of differences I noted between these particular cameras.  Since there were small differences during the production run of the original SP, this list is not represented as being complete --- or even consistent with all original black SP's.

Revised: September 12, 2017 .  Copyright © 2006  Stephen Gandy. All rights reserved.    This means you may NOT copy and re-use the text or the pictures in ANY other internet or printed publication of ANY kind.  Information in this document is subject to change without notice.  Other products and companies referred to herein are trademarks or registered trademarks of their respective companies or mark holders.